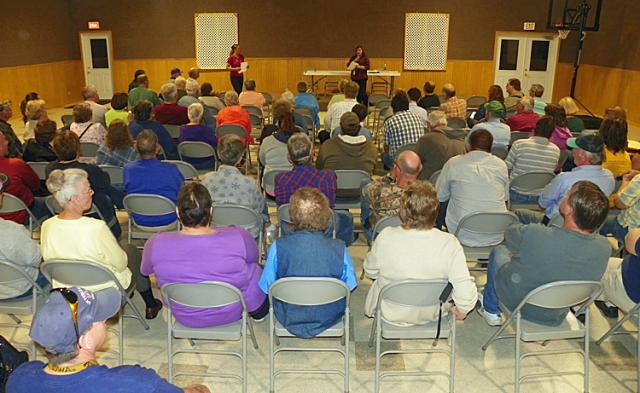 In order to implement POST Plan — the plan to reduce hours at 13,000 post offices — the Postal Service will be holding a public meeting at each impacted post office.

The Postal Service has already scheduled 1,518 public meetings for the two-week period October 8 through October 19.  Around 600 are scheduled for the week of October 8, and over 900 for the week of October 15.  A list of the meeting times and places is here; a spreadsheet version is here, a map here.  The list comes from the USPS website, here.  [Google Fusion Tables (with the maps) was shut down on Dec. 3, 2019. A Carto map is here.]

Some 862 of the meetings are scheduled for the post office lobby.  Most of the POST Plan post offices are small, rural offices, so it’s hard to imagine that most of these locations have much room for a meeting, but perhaps the Postal Service doesn’t think many people will attend.

Half of the meetings have been scheduled for 4:00 p.m. or later.  The other half are scattered throughout the earlier part of the day, which will make it difficult or impossible for some people to attend.  They will have to content themselves with having their voices heard through the survey.

The Postal Service has said that it would begin the implementation process for POST Plan with those post offices that currently have a postmaster vacancy.  About 3,000 offices had a vacancy when the POST Plan list was first published back in May.  Since then, some 4,000 postmasters have taken the retirement incentive, so perhaps another 2,000 vacancies are opening up.  Many postmasters are transferring to other positions, so even more positions will become vacant soon.

It would appear, then, that the Postal Service plans to hold meetings for over 7,000 post offices — more than half the POST Plan list — between October 8 and mid-December — that is, unless the Postal Service decides to slow down on the meetings during the election and Christmas mailing season.  That may very well be the case.  The USPS website indicates that there will be meetings for four weeks, October 6 to November 2, but it says nothing beyond that.

We’re still getting reports that the surveys are being given only to post office box holders and not everyone in the community, but it’s not clear how widespread this practice is.  We’ve also been told that the survey is confusing people who currently have home delivery, since one of the options is close the post office and get rural delivery.  That’s meant to apply to box holders, but some people may feel they need to check this box in order to continue getting home delivery.  If 60 percent of the respondents check that box, for whatever reason, it will mean a discontinuance study rather than reduced hours.

We reported earlier that the meeting for the post office in Jonesville, Texas, had been scheduled for Election Day, but we’ve now learned that the meeting has been rescheduled for November 8.  The letter advising customers of the new meeting offered no explanation for the change or any apology for scheduling the meeting on Election Day.  Customers in Jonesville were also told that the Postal Service was re-doing the survey, and they were asked to fill out a second questionnaire.  That’s obviously confusing people, and there’s some concern that the first survey may not be counted and that people won’t fill out the second survey because they’ve already done one.

The Postal Service says that one week after the meeting, it will announce its decision for the post office.  If the decision is to reduce the hours rather than discontinue the office, the new hours of operation will be posted, and they’ll take effect 30 days later (or the beginning of the pay period after that).

The Postal Service has said repeatedly that it planned to roll out POST Plan gradually, over a two-year period, but for over half the post offices on the list, it looks like “gradually” means over the next few months.

UPDATE: On Oct. 9, the Postal Service published the schedule for a fourth week of meetings (Oct. 27 – Nov. 2).  During this four-week period, then, there 3,044 meetings scheduled.  It looks like 1,669 (over half) of them have been scheduled for the post office lobby, and 1,734 of them (well over half) are scheduled before 5 p.m.

UPDATE: The Postal Regulatory Commission would like to hear your feedback about your experiences with the implementation of POST Plan.  Chairman Goldway has posted a note on the Commission’s home page, and it provides the following contact information:

Thanks to Kyle Munson of the Des Moines Register for pointing out the USPS website page where the meeting lists appear.

If you’re looking for your meeting time and place, note that the USPS website says, “These schedules are subject to change. Please check your Post Office to confirm meeting details.”

(Image credit: Meeting about the post office in Brandon, Iowa, in October 2011, when the office was being studied for closure under the RAOI.  Brandon is now set to be reduced to four hours a day; no date or location for the meeting yet.)