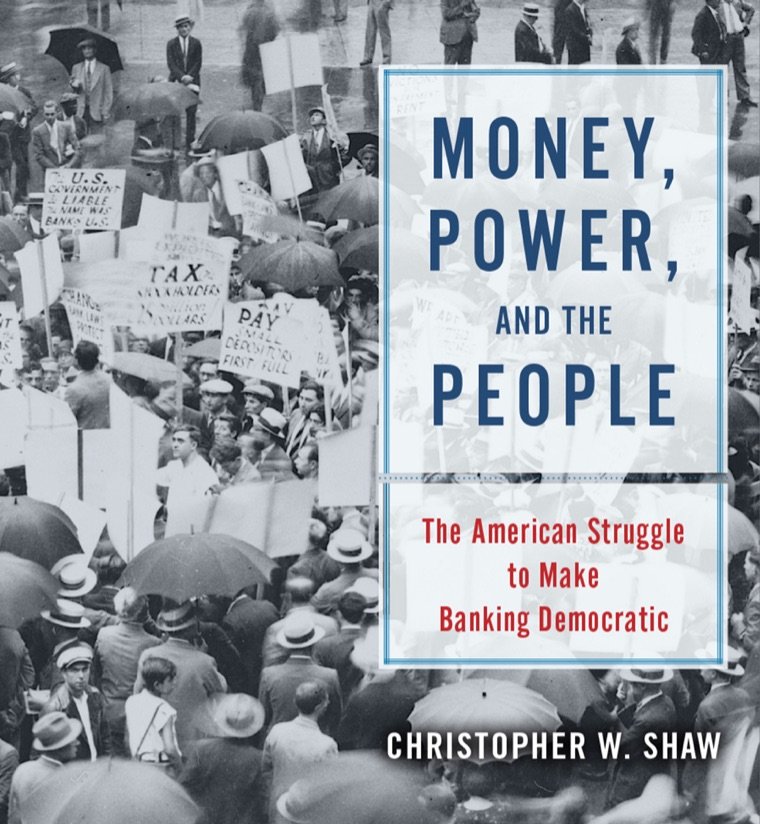 Shaw is out with a new book, Money, Power, and the People: The American Struggle to Make Banking Democratic.  Like his book on the post office, the new book is a story about the conflict between large corporations and “the power of the people” — labor unions, farmers, progressives, and average citizens.

Money, Power, and the People, says the publisher’s blurb, “upends the conventional thinking that financial policy in the early twentieth century was set primarily by the needs and demands of bankers.”  Shaw shows that “banking and politics were directly shaped by the literal and symbolic investments of the grassroots.”

The book has an extensive discussion of the history of postal banking, going back to the 19th century.  “For decades,” Shaw writes, “workers and farmers had sought postal savings banks, which would be guaranteed by the national government.”   For working people, the post office was a model for how banking could serve the public interest, and they promoted a wide variety of postal banking functions, from loans to checking accounts

The banking industry, however, saw the competition as a threat to their profits, and for a long time they managed to prevent legislation establishing a postal banking system.

With the Bankers’ Panic of 1907 — a three-week period when stocks fell 50% — confidence in the financial system collapsed and calls for postal banking intensified.  Postmaster General George von L. Meyer campaigned for the idea himself, arguing that a postal savings bank would help stabilize the economy.

In 1910, Congress finally passed the Postal Savings Bank Act, which established a government savings bank in designated post offices.  The system operated successfully until 1966, when, for a variety of reasons, it was abolished by Congress.

In recent years, because of all the problems with the payday lenders and underserved communities, the idea of returning to some kind of postal banking system has gotten new traction.  A recent OIG report and advocacy by politicians like Bernie Sanders and Elizabeth Warren have made it seem possible that postal banking will actually make a comeback. Shaw’s history of the banking industry is all the more important.

You can buy the new book directly from the University of Chicago here, or from Amazon, here.