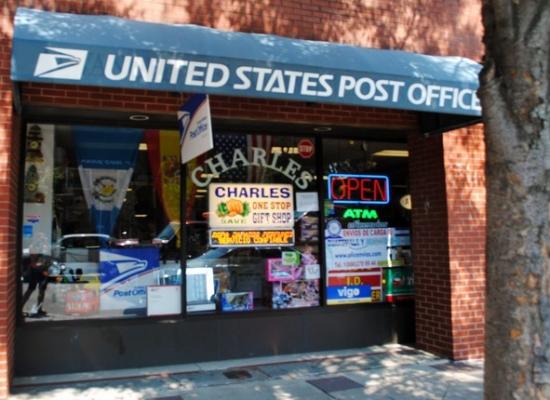 The major media outlets are finally reporting, as we’ve known for several days now, that over 3,600 post offices are being targeted for closure in the Postal Service's new plan, but here’s the real news.  The Postal Service is also unveiling its “replacement strategy” for communities that lose their post office, and it turns out to be a “plan to have third-party retailers provide services in places that lose a post office.”

Postal Service spokeswoman Sue Brennan explains: “If you're a community and there is a local convenience store, for example, we might be reaching out to these organizations to see if they would be interested in providing limited postal service for the community that might be affected."

Such arrangements will likely be put in place place in "communities that have existing businesses, mom and pop shops — some type of local business that could also provide postal services," Brennan told CNNMoney.

Postmaster General Donahoe referred to the strategy as a new "village post office concept." "We're finding a lot of interest with small businesses who say, 'I'll gladly sell stamps and provide package services,' " he said. Of the 3,653 post offices on the list being released Tuesday, 2,500 potentially qualify for the "village" concept, he estimated. In other cases, the agency could move postal services to a neighboring town.

So this is the “new concept” that the PMG referred to last week?  A $70-billion-a-year operation, and this all they’ve come up with?  A few days ago I joked that the “new concept” was going to be contracting out postal services to Starbucks.  That was supposed to be funny.  The only thing I got wrong, it seems, was the name of the business.  It’s not Starbucks, it’s your local 7-11 and Charlies' gift shop.

While the Postal Service may want to make this idea sound homey with its talk about "mom-and-pop stores" and the "village post office," there’s nothing new about contracting out postal services.  It’s called a “contract postal unit” or CPU, and as of 2010, there were some 2,931 CPUs in the country, as well as 763 “community post offices" or CPOs.

According to the 2009 Postal Employees Guide to Contract Postal Units, a CPU is “a supplier-owned or supplier-leased site operated by the supplier under contract to the Postal Service to provide postal services to the public at postal prices.”  A CPO is closely related—that's a contract postal unit in which a small rural community, rather than a local business, assumes the responsibilities of providing postal services.

The USPS publication “Foundation for the Future” (2010-2011) states further that “most CPUs offer the same basic services available at Post Offices.  CPUs are staffed by the host retailer, typically in supermarkets, card and gift shops, colleges, and similar locations.”

The Postal Service has also made arrangements with private retailers, typically a packaging service, to sell stamps and some postal services.  These retailers charge customers a service fee in addition to the postage and shipping costs.  These are not CPUs because they receive no fee from the Postal Service.

From what Ms. Brennan is quoted as saying, the "replacement strategy" sounds more like a CPU than this other sort of arrangement.  In any case, the PMG may come up with a new type of CPU, but for now there are two:

The first is called a “performance-based contact,” and it's typically the arrangement if the revenue is expected to be $100,000 or more per year.  The CPU provider is paid a percentage of the revenue that it receives from the sale of postal products and services each month.  Payment may be a straight or split percentage of all sales or a flat fee plus percentage of identified sales.

The second type is a “firm-fixed price contract,” typically used when the CPU revenue is expected to be less than $100,000.  With this contract, the supplier is paid a fixed annual rate in 12 equal monthly installments. According to the USPS, CPUs provide several “benefits” to postal customers.  They offer “expanded access to postal products and services at Postal Service prices, convenient locations, and extended hours (weekends and evenings).”

CPUs are beneficial to the supplier because they generate customer traffic and provide additional revenue, as well as giving the business a competitive edge.

Sounds like a win-win-win for the customer, local business, and the Postal Service.  Why didn’t they think of this sooner?  Oh, that’s right, they did.

The postal workers unions are, naturally enough, completely opposed to the contract postal unit idea, since it's so transparently designed to replace facilities staffed by union workers with a model where there are no union employees.  The APWU has advised their members to watch for violations of the rules governing CPUs.  For example, the CPU facility is supposed to be owner operated—you can’t be a renter and then contract with the Postal Service as a CPU.  A CPU cannot have post office boxes, a CPU cannot sell competitors’ branded products, including those of UPS and FedEx, unless an exception has been granted by USPS headquarters, and a CPU cannot be located in or directly connected to a room where intoxicating beverages are sold for consumption on premises.

So sorry, Joe's Bar & Grill will not be contracting out as a CPU.  That doesn't mean, however, that a place selling alchohol can't sell postal products.  Check out Lonestar Beverages and Sam's Beer & Wine, "your utlimate source for beer and wine," which also offers postal services, from stamps to priority mail and lots more—a real convenience to the residents of Carrollton, Texas, which does still have a regular post office, though you can't buy your beer there.

The Postmaster General's "new concept" is also very insulting to postmasters, since this "replacement strategy" is based on the premise that anyone who works in a convenience store or a gas station is capable of running a post office.  Postmasters possess real expertise acquired over a long period of time, and they play important roles in their communities.  How can national service not be degraded when the postmaster's responsibilities are transferred to the guy who takes your money at a gas station?  (No offense to gas station attendants, some of whom I'm sure would make great postmasters, if they had chosen that as a career path.)

The main problem with a CPU is that it’s another step in the "piecemeal privatization" of the Postal Service.  It doesn’t just threaten unions and postmasters.  It undermines the entire idea of the postal system as a public service.  As the name itself says, it's all about contracting out postal services to private enterprise.  If the country wants to privatize its postal system, that's fine, but it's up to Congress to do that, not the Postmaster General.  This back-door path to privatization is not in the spirit (and probably not within the letter) of Title 39, and it should be rejected by the Postal Regulatory Commission in its upcoming Advisory Opinion.

Well, the way things are going, maybe 7-11 can do a better job “binding the nation together.”  The Postal Service doesn’t look like it’s up to the task.

(And apologies for the absence of some links to USPS facts and quotations here—the USPS website was upgraded over the weekend, and now all the links are broken.  Good luck finding anything on their website.)

UPDATE: July 26: Here's the Postal Service fact sheet on "Village Post Offices," which just came out earlier today, after this post was written.  Doesn't look like anything needs to be corrected, except that the Village PO is just as likely to be a CPO as a CPU—they might be located in a town hall or community center, as well as in a private business.  Either way, as the fact sheet says, "The Village Post Office is an important new example of how the Postal Service is changing to better meet America’s needs."  Indeed.