There were a couple of interesting developments this week in the story about how the Postal Service and its real estate broker CBRE are handling post office lease deals and the sales of postal properties.

On Christmas Day, the USPS Office of Inspector General posted a solicitation notice looking for a supplier to do an analysis of the fair market value of postal properties that have been sold and of properties currently leased by the Postal Service.  The OIG appears to be launching an investigation (or expanding one already underway) into the central question raised by Peter Byrne’s new book on the sale of postal properties: Are the properties being sold for less than market value, often to businesses with friendly relationships with CBRE?

On another front, news media in Princeton, New Jersey, are reporting that a buyer has been found for the historic Palmer Square post office.  While the sale price has not been revealed, the buyer is LCOR Ventures, which appears to be a spinoff of LCOR Inc., a large real estate company that has done several big deals with CBRE in the past.  That coincidence may raise some eyebrows at the OIG.

The OIG contracts out

The OIG's solicitation notice was posted on FedBizOpps.gov on December 25.  It says that the OIG is looking for “a supplier who possesses specific subject matter expertise in the area of fair market value of properties.”  The notice indicates that the OIG is looking at both properties that the Postal Service leases for its post offices and the owned properties it has been disposing of.  As the solicitation states, the supplier will “assess the fair market value of recently disposed U.S. Postal Service owned properties and conduct an analysis of fair market rent for markets nationwide.”

The notice explains that CBRE is the Postal Service’s exclusive real estate broker and responsible for negotiating leases and selling properties.  “We would like the Supplier to perform reviews of the appraisals in order to ensure they were representative of the fair market value.”

Proposals from suppliers are due on January 10.  The OIG will issue decide who to hire on or before February 10, 2014.  The OIG wants the report within thirty days of the tasking date, so the OIG would have the results sometime in March.

The OIG’s website currently contains nothing about an audit into the fair-market-value question like this, so it’s not clear what the context of the solicitation notice is.  It’s possible that the OIG is expanding the scope of an audit currently underway that’s looking into the preservation and disposal of historic post offices.  Or it may be that the OIG is starting a new audit on the market value issue and has simply not posted anything about it on the website yet.

In all likelihood, the OIG solicitation notice came as a result of allegations made in Peter Byrne’s new book, Going Postal: U.S. Senator Dianne Feinstein’s husband sells post offices to his friends, cheap.  Byrne documents numerous instances in which CBRE sold postal properties at below market value. In some cases the buyers were CBRE’s clients and business partners.  The fact that the chairman of CBRE Group Inc. is Richard C. Blum, husband of Senator Dianne Feinstein, has given Byrne’s story a lot of attention, including this article in the L.A. Times.  (There's a list of the properties Byrne researched here, along with a few more.)

The solicitation notice is the latest development in an ongoing story about how the Postal Service manages its vast real estate portfolio of 8,600 owned properties and 24,000 leased spaces.  An OIG investigation a few years ago led to the resignation of a member of the USPS Board of Governors involving real estate deals, and now there’s new controversy surrounding the CBRE contract.

The OIG has done several recent audits into postal real estate issues.  In June of this year, the OIG released an audit on the Contracting of Real Estate Management Services.  The OIG found that postal officials were not providing enough contract oversight, and there was no set maximum value for the contract with CBRE.  Perhaps most problematic was the potential for conflicts of interest in the way CBRE was negotiating lease renewals on behalf of the Postal Service.

Last summer, the OIG began an audit investigation on the preservation and disposal of historic properties.  It was due out in October, but it has been postponed, perhaps as late as March 2014.  The audit announcement currently does not appear on the OIG website, which has been something of a mystery in itself, and it’s possible that the solicitation notice posted on Christmas represents an extension of this audit.  (An archived version of the audit announcement is here, and my report to the OIG on the preservation and disposal of historic post offices is here.)

Then in November, the OIG announced another audit investigation involving postal properties. This one responds to complaints that the Postal Service is not following proper procedures when it makes decisions to relocate retail operations from one building to another, which is typically what happens when it wants to sell a post office.  This audit was due out in early January, but like the audit on historic properties, it will probably take longer than that.  (There's more on the relocation issues here.)

The Postal Service has been trying to sell the Palmer Square post office since 1997.  According to an article in Planet Princeton, the Postal Service completed a study and informed postal workers and elected officials of its plan to sell the building back in September 2011.  A public meeting was held in December 2011, but it obviously didn’t mean much since a decision had been made months before.

The sale was blocked by the Historic Preservation Office, a branch of the New Jersey Department of Environmental Protection.  According to an item in the Jersey Journal, the Preservation Office “believed the Postal Service had not taken adequate steps to ensure its history was preserved.”

The post office was built in 1937 under the New Deal.  It contains a mural done in 1939 entitled "America Under the Palms" by Karl Free.  The mural has become controversial because of the way it depicts Native Americans cowering under the symbols of American expansion.  It’s not clear at this point what will happen to the mural once the building is transferred into private hands.

A Vice President of CBRE says that the new owner doesn’t know yet how it will use the building, but he mentioned maybe shops and/or a restaurant.  There’s also no word about what the Historic Preservation Office has to say about the sale this time around.

As for postal retail operations, the Postal Service has made arrangements to lease a space a couple of blocks from the post office to a smaller space on the Square.  Since it’s so close, it doesn’t sound like the new location will cause any inconvenience to customers, but the smaller space (2,000 square feet) may turn out to feel a little cramped.  The bigger issue will be that the community has lost a public landmark and may lose access to the mural as well.

When the Postal Service made a push to sell the Palmer Square post office a few months ago, there were a half dozen bidders.  The Princeton Town Topics and Princeton Planet now say the buyer is LCOR Ventures, which they describe as a California-based development company.

It’s hard to find out anything about LCOR Ventures.  The company doesn’t seem to have a website, and there’s not much about it on the Internet.  After the Princeton Planet article on the sale said LCOR Ventures was based in New York, it was asked to issue a correction saying the company was based in Oakland, California.

As it turns out, LCOR Ventures is related to LCOR Inc., a large real estate investment and development company based in Berwyn, Pennsylvania.  LCOR Inc. was founded by Eric Eichler in 1992; in 2010 Mr. Eichler founded LCOR Ventures.

It's hard disentangling the two companies.  When an entity called LCOR Ventures registered to do business in California in July 2010, the registered address was 100 Berwyn Park, Berwyn, Pennsylvania, the home of LCOR Inc.  And in 2012, when the California State Teachers’ Retirement System invested $800 million in LCOR Inc., the notice in Mergers & Acquisitions called the company LCOR Ventures LLC.

There's another angle to the LCOR story.  One news article about the sale mentions that Princeton native Tyler Wood, son of former Princeton BMW President Denise Wood, is the vice president for acquisitions for LCOR Ventures.  He may very well have grown up going to the Palmer Square post office.  Before becoming a VP at LCOR Ventures, he worked for LCOR Inc. as a project manager in Manhattan.  (On his LinkedIn page, if you click on the link for LCOR Ventures, it goes to LCOR Inc.)

The news reports don’t say what the sale price for the Palmer Square post office was, and the listing on the CBRE-USPS Properties for Sale website doesn’t have an asking price.  A news report in 2011 said the assessed value was $1.9 million.

If it turns out the post office is selling for much less than the assessed or market value, the sale may catch the attention of the OIG's investigation.  Considering LCOR Ventures' relationship to LCOR Inc., the latter's prior connections with CBRE may also become significant, and there are plenty of them.

In 2007, LCOR purchased a leasehold interest in a 17-story building at 545 Madison Avenue in New York.  After extensive renovations were completed, the company that had been in charge of leasing was replaced by CBRE, which went on to negotiate several big lease deals for LCOR.

In 2010, LCOR was part of a joint venture that leased a 362,000-square-foot building in LCOR's North Bethesda Center to the Nuclear Regulatory Commission.  CBRE’s Government Services Group represented LCOR in the lease transaction.

In 2011, CBRE arranged the sale of an office building owned by LCOR in Alexandria, Virginia.  The four-story, 67,093-square-foot office building at 2050 on Ballenger Avenue in the Carlyle area was sold to Catholic Charities. 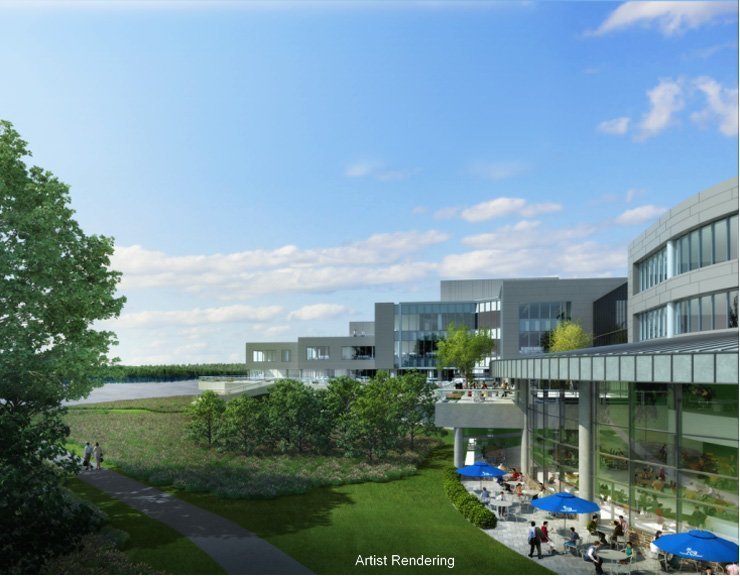 In 2012, LCOR sold another building on Ballenger Avenue in Alexandria with CBRE executing the deal.  The buyer for this one was Helicopter Association International.  In both of the Ballenger Avenue sales, LCOR was represented by Stephen Hoffeditz, now a senior VP at CBRE.

Earlier this year, LCOR was part of a joint venture to develop The Green at Princeton, a 720,000-square-foot office-and-research campus located in Plainsboro, N.J.  According to an item in NJBiz, in October CBRE was named the exclusive leasing agent for the development.

But between the revelations in Byrne’s book, the ongoing OIG investigations, and the new OIG solicitation notice about fair market value issue, the sale of the Palmer Square post office may come under a scrutiny the participants did not expect.

UPDATE AND CORRECTION: After this story came out, we were informed by a representative of LCOR Inc. that it is no longer in any way connected with LCOR Ventures and that they are two completely separate companies and not under the same ownership.  More details to follow as they become available.  It's all still a bit confusing.  Bizapedia says that the principal address of LCOR Ventures Enterprises LLC is Berwyn Park, PA, and it says, "This information is current as of September 18, 2013."