On Monday of this week, Ruth Goldway, chairman of the Postal Regulatory Commission (PRC), will be speaking in Venice, California, at a meeting of the Venice Post Office Task Force.  The subject of the meeting: the fate of the Venice Main Post Office, a beautiful example of New Deal architecture, which the Postal Service has decided to close and sell, a decision now being appealed before the PRC.  The Postal Service has been selling off historic post offices right and left, and it’s really a crime, but no one can stop it.

For Goldway, the trip to Venice will be something of a homecoming, and she probably knows the Venice post office well.  Though born and raised in New York City, Goldway lived in southern California for over two decades.  During the 1970s, she worked in California’s Department of Consumer Affairs, and from 1979 to 1983, she was a council member and mayor of Santa Monica, which borders Venice.  She subsequently worked in Los Angeles at California State University and the Getty Trust.  Unfortunately, it seems that Goldway's history with Venice has made it necessary for her to recuse herself from the appeals case.

The Venice post office was built in 1939 by Roosevelt’s Works Projects Administration.  It’s a beautiful building, and it contains a prized New Deal mural, “First Thirty Years of Venice’s History," by Edward Biberman, a California Modernist whose work appears in the Smithsonian and the National Portrait Gallery.  The mural features Venice’s founder, Abbot Kinney, surrounded by the town he created.

Normally when the Postal Service wants to close a post office, it has to go through a formal discontinuance process that gives the community an opportunity to express its concerns.  But in this case, the Postal Service says it’s under no legal obligation to go through that process because the “post office” is not really “closing” — it’s just being “relocated" to a carrier annex.

Tell that to the citizens of Venice.  They know a closing when they see one, and they know that closing the Venice post office will do irreparable harm to their community.  They’ve protested to Postal Service officials, formed a task force to organize their efforts, and filed an appeal with the Postal Regulatory Commission.

The case for the appeal argues that community deserves the full discontinuance procedure because the post office is, for all intents and purposes, closing.  The building will be sold, and the new retail facility in the annex is very small compared to the one at the historic post office.  The brief submitted by James Smith on behalf of the Free Venice Beachhead newspaper describes the post office very nicely and explains how vital it is to the community: 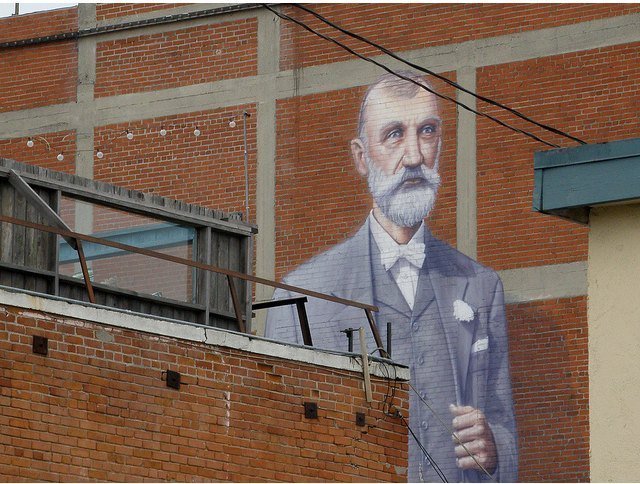 “The [Venice Main Post Office] VMPO was a Works Project Administration building that includes a cornerstone dated 1939.  Thus this historic building has been at the center of Venice community life for 72 years.  It is located on the central plaza in the center of the main commercial district of the town.  It is constantly busy with postal customers arriving on foot, by bicycle and auto.  There is no busier building in the Venice community.  Generations of Venetians have patronized this building on a regular basis throughout their lives.  Upon climbing the stairs or handicap-accessible ramp, they entered an attractive lobby with a deep wood finish.  Their eyes automatically turn to the beautiful and well-preserved “Story of Venice” mural by artist Edward Biberman on the south wall. The mural was painted in 1941 by the famous artist, and is his last surviving mural.  It is seen by hundreds of people per day, thanks to its position in the post office lobby.  The aesthetic charm of the building, and the museum-quality art in the lobby, is beloved by this community which is filled with artists, poets, muralists and connoisseurs of art.  The character of the Venice community as an arts haven means that the blow to the community of losing both the building and the mural is far greater than it would have been if it were a nondescript building that was bereft of art.”

The brief makes several other arguments for keeping the post office open.  It points out that it makes more financial sense to keep the main post office and sell the annex instead, and it challenges the Postal Service’s claim that the character of the building and mural will not be altered.  As the appeal notes, once the building is in private hands, the mural will not be available to the public, and the building will no longer be a center of community life.

The Postal Service has also given out conflicting information about the public hearing.  It has said that a hearing is not necessary because it’s not a closing, but it has also said that a meeting took place at a small restaurant, although it’s been difficult finding anyone who was there for it, and no record of the meeting seems to exist.

For its part, the Postal Service says the PRC has no jurisdiction to hear the appeal because no discontinuance has occurred — it’s just a relocation — and it has promised to follow the statutes contained in the National Historic Preservation Act when it comes to reusing or disposing of the property and preserving the mural.

The community in Venice has also applied to the PRC for a “suspension of determination” — which would block the closing of the post office while the case is being heard.  The Postal Service has objected to that as well, arguing that “granting a suspension of the relocation will frustrate the Postal Service’s efforts to immediately reduce costs, in light of its critical financial situation.”

The Postal Service doesn’t say how much a delay of a couple of months would cost, but it can’t be much, and it’s certainly not going to do anything to help with a $20 billion deficit.  There’s no rent to pay, and the employees are just moving to the annex, so there’s no savings there either.  Plus, the building has not been sold yet, so no revenue will be coming in from the sale anytime soon.  How much could it cost to postpone the closing and “relocation” while the appeal is heard?

It seems crass and callous even to mention miniscule cost savings when the future of a community icon is at stake, but that’s the Postal Service for you.  The American people own a vast network of brick-and-mortar post offices that has taken over two centuries to build, and more than two thousand of our post offices are historic architectural treasures.  But the executives of the Postal Service seem to think that this legacy belongs to them, and they act as if they can do whatever they want with it.  They are disposing of these buildings as fast as possible, selling them to the highest bidder, with no regard for communities, history, art, or the country.  It’s really amazing that the people entrusted with our post offices care so little for them.

(Photo credits: Venice post office (that’s a FedEx box in front); Biberman’s mural; Rip Cronk’s mural of Abbot Kinney on a wall in Venice.  And read more about the effort to save the Venice post office at the Free Venice Beachhead.)