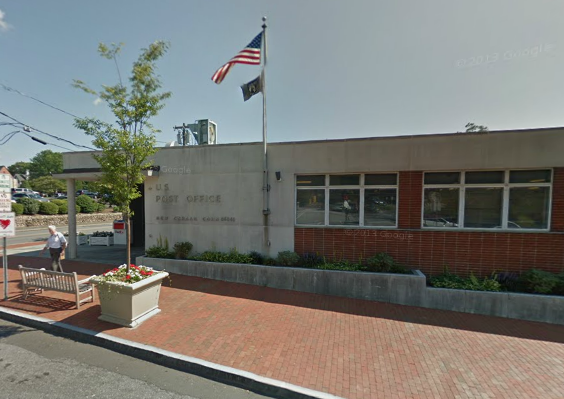 This happens all the time.  Over the past few days, three more cases have been reported in the media — in New Canaan, Connecticut; Aripeka, Florida, and Chattanooga, Tennessee.  The stories are strikingly similar.

“No interest in staying” in New Canaan

Last week the postmaster told the New Canaan Advertiser that the post office would need to find a new location because the lease is expiring on January 31, 2014, and the lease negotiations broke down.

“We were negotiating and we just came to the end of negotiations and we couldn’t come to a mutual conclusion,” said New Canaan Postmaster Nancy Cornelio.  “We’re keeping our eyes and ears open for a smooth transition to a new place in New Canaan.”

The same line came out of L’Enfant Plaza.  Christine Dugas, a spokesperson at the Postal Service’s headquarters, told the Advertiser that after “extensive negotiations,” postal officials learned on Tuesday that the lease will lapse in January and that officials are reviewing all options, including short- and long-term possibilities, “to ensure continued service to our New Canaan customers.”

The landlord, needless to say, has a different story to tell.  Again, from the Advertiser: “Harry Traub, a partner at Elm Street Partners, told the Advertiser on Monday that in May his firm thought it had negotiated a deal with the U.S. Postal Service for the Post Office to remain in the current space on Pine Street.  Then, the firm received a call one day that the Postal Service reconsidered. The reason, Traub said, is that the Postal Service determined that office no longer needs the 7,000-square feet of space.  Traub said his firm asked the Post Office to submit a plan of how much space it would need, but it never did.”

In an earlier report back in October 2012, the landlord told the Advertiser, “We’d very much like the Post Office to stay in the building, and we think it reflects the wishes of the residents in town.”

The landlord said the Postal Service promised to present a proposal to stay, but it has not been forthcoming with one.  He also noted that he had been talking to postal headquarters about the lease for the past two years.  That was last October.

Ten months have gone by, and it’s obvious now that the Postal Service has no interest in staying in New Canaan.  The post office has been in this location since 1958.  That will apparently come to an end in January.

A stack of papers in Aripeka

Residents of Aripeka, Florida, have just learned that on September 13 their post office will be closing for an emergency suspension over a lease issue.  Everyone has a P.O. box, so now they will have to drive seven miles each way to Hudson to get their mail. 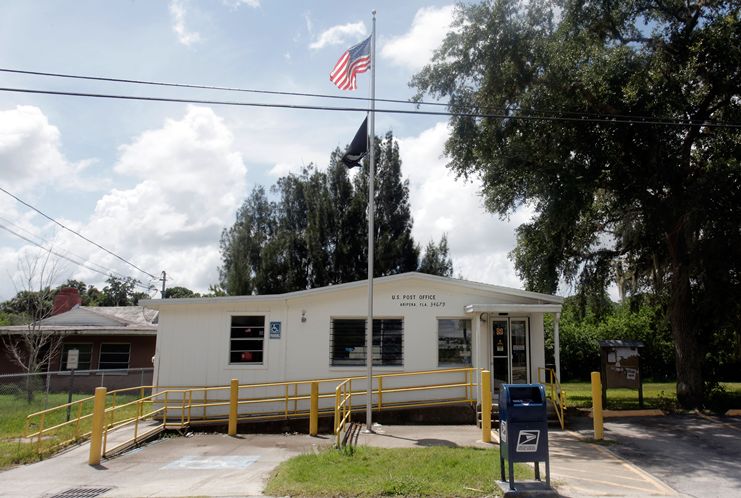 According to WFLA.com, the Postal Service sent customers this statement: “We were unable to negotiate a lease renewal or extension of the lease with the landlord. The landlord would not agree to federally mandated language required in the lease.”  The Tampa Bay Times has more details:

“The postal service blames the closure on the landlord, which if you know anything about Aripeka history, seems almost laughable.

‘Louise Geiger, 83, has been leasing the building for years at $600 a month. The contract has always been simple. One page. This year, she says, the postal service sent her a thick packet full of forms to sign. She said it would take a lawyer to figure them out and she was already looking at increased premiums for liability insurance.

“I just told them I wasn’t signing it,” she said.

Ms. Geiger is not your average post office landlord.  Her grandfather, James B. Kolb, was the Arikpeka postmaster from 1921 until his death in 1945.  Then his daughter, Lizzie Bell Jackson, took over until her retirement in 1971.  Geiger was born next door to the post office, and in 2008, she bought the the old wooden structure that had once served as the post office and had it moved to next to the present modern office, where it now sits in a grove of trees. 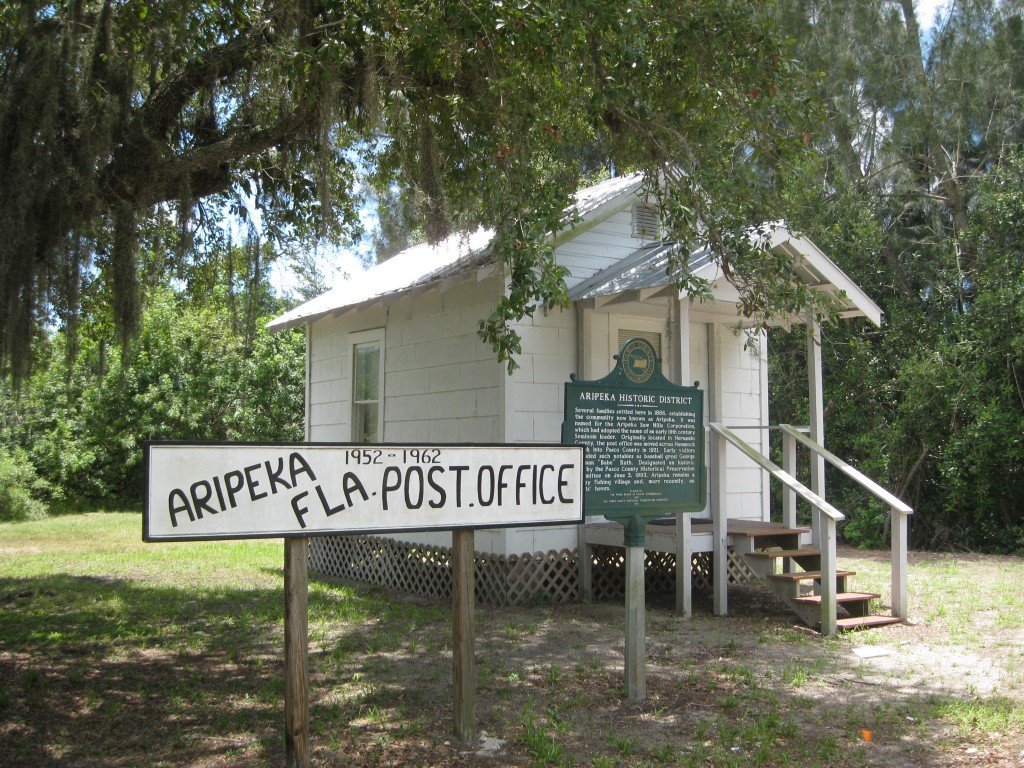 “I had to save it,” she said at the time. “For my grandfather. For my family.”

As the piece in the Tampa Bay Times puts it, “This doesn’t sound like a woman unwilling to negotiate.”

The folks in Aripeka are convinced that the Postal Service is just using the situation to do something it’s wanted to do for a long time — close the post office because it doesn’t bring in a lot of business.

The story gets worse.  Not only does the Postal Service not want to provide Aripeka with a post office — it doesn’t want to deliver the mail there at all.  A recent cost savings analysis showed that the Postal Service would need to spend $12,000 a year delivering the mail to 189 locations in the area.  It will be cheaper for the Postal Service just to have everyone in Aripeka drive the seven miles to  Hudson to get their mail.

The community bulletin board is filled this week with notes saying “save our post office.”

A sign was posted on the door of the East Lake Station post office in Chattanooga this week saying the post office would be closing in just two weeks because the Postal Service “couldn’t come to financial terms with the landlord.”

According to WRCB-TV, “the landlord said she’s parting ways with the United States Postal Service on bad terms.” 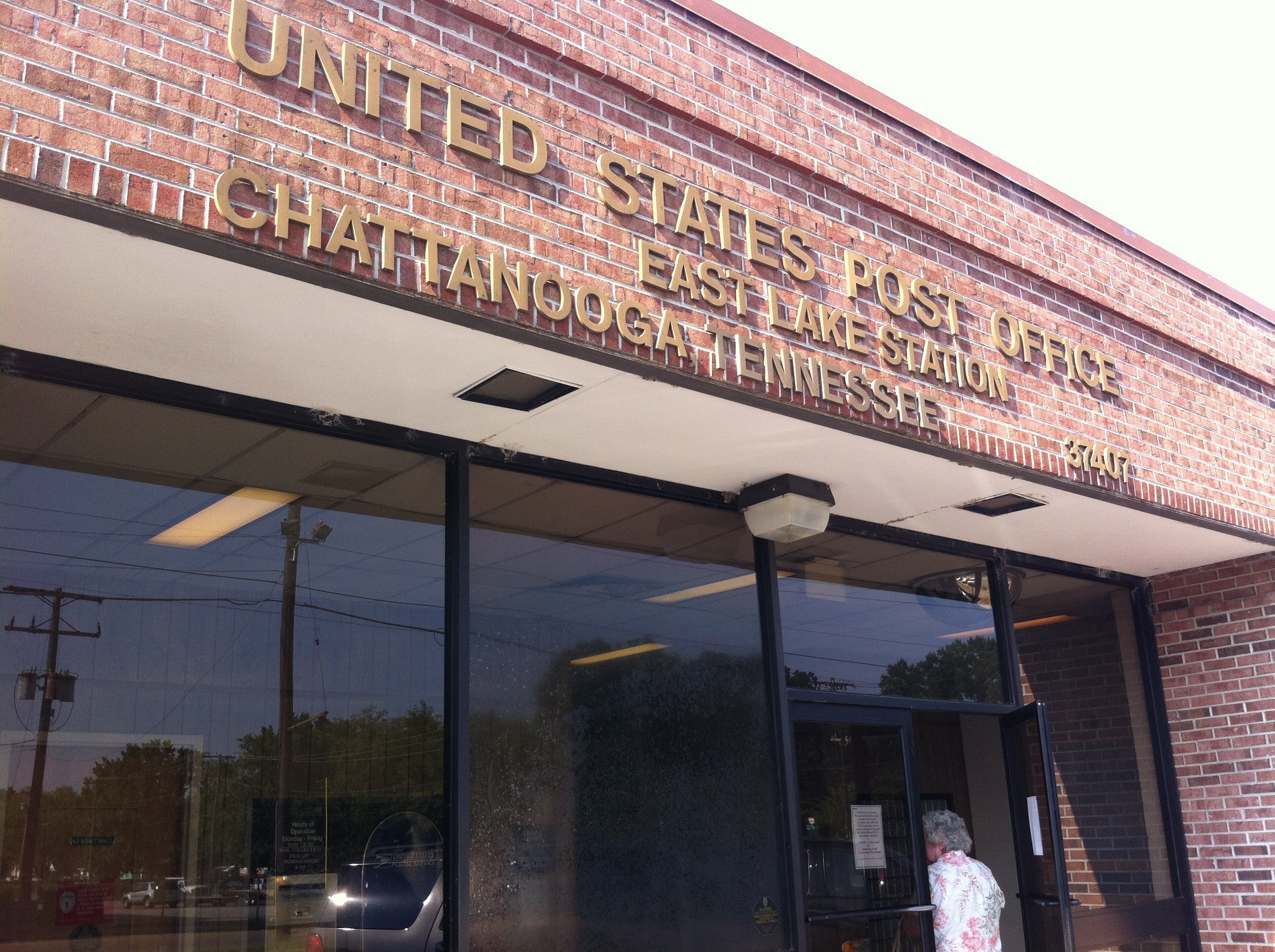 The landlord, Janis Green, says that the Postal Service had always signed five-year leases, but due to its financial constraints, when it came time for a renewal, the parties agreed to write up a one-year lease extension.  The offers and counter-offers went back and forth, and the landlord thought they had come to an agreement — a new one-year lease starting September 1, 2013, at an annual rent of $50,600, which represents a $3,700 reduction from the current lease.

Green signed the lease and sent it off, but she never got a signed copy back from the Postal Service.  Instead, she learned the post office would be closing when Chattanooga Postmaster Pete Dechelle issued a news release stating, “”The Postal Service could not come to financial terms with the lessor…. Due to the financial constraints under which the USPS is operating, we’re going to emergency suspend this facility.”

Green still hopes that the Postal Service will honor the agreement she thought they had come to, but a USPS representative told Channel 3 that’s not happening and the lease won’t be renewed.

It may make sense in some cases for the Postal Service to close a post office or to relocate to a smaller space, but blaming the landlord or manufacturing a lease dispute is not good form, to put it mildly.  Negotiating in bad faith is also against the law.

One reason the Postal Service plays this game is that it’s required to get public participation when it wants to close or relocate a post office.  The public is usually not happy about the changes, so it helps if the Postal Service can say it doesn’t have any choice — the landlord has a new tenant, or the landlord wouldn’t agree to the terms of the new lease, or whatever.

That puts the landlord in the awkward spot of either disputing the Postal Service’s version of things or taking the blame himself.  If the landlord owns other post office buildings, it’s even more difficult to call out the Postal Service on its misinformation.  It could make problems for future negotiations.

As a result, some landlords don’t want to say much to the media about what really happened behind the scenes.  But the storyline has been repeated so many times it’s not hard to see the pattern.  If a post office is closing or being relocated because of a lease problem, chances are the Postal Service made a decision first and the lease issue came later.

A pattern of intention

There are just too many examples for this not to be a matter of intention.  Here are some recent examples:

In Climax, Georgia, the Postal Service suspended the post office over a disagreement in the lease negotiations that amounted to a few dollars a month. The landlord, who is also the president of a lessors’ association, has filed complaints with the PRC, accusing the Postal Service of having “a predetermined plan to close the Climax post office, and reduce postal services, while preventing any meaningful input from the community.”

In Freistatt, Missouri, the post office was suspended over a lease issue, but the landlord says he made several counter offers after learning from Freistatt village officials that the office was going to be closed, including an offer to cut the rental rate.  The Postal Service proceeded to issue a Final Determination to close the post office permanently.  That decision is now being appealed to the PRC.

In West Palm Beach, Florida, the Postal Service closed the Southboro Station post office with the explanation, ““Southboro simply involved a lease expiration with no renewal. USPS was told by landlord that there is a new tenant.”  The landlord, however, says the Postal Service told him it did not need all the space it was renting and did not plan to sign a new five-year lease.  The landlord continued to negotiate anyway and even offered the Postal Service a smaller space, but no go.

In Tamms, Illinois, the post office was suspended over a lease issue when the landlord wouldn’t agree to an early-termination clause giving the Postal Service permission to end the lease on six months notice.

In Darwin, California, the post office was suspended because, as the Postal Service explained, “Lease negotiations with the current landlord have failed and attempts to locate a suitable new location within the city limits of Darwin have been unsuccessful.”  The landlord says he was unaware that lease negotiations had failed and first learned that the Postal Service was closing the office after a notice was posted at the post office and someone in town gave him a call.

The PRC knows all about this pattern and the problems associated with it, but the Commission doesn’t seem able to put a stop to it.  There’s an open docket on emergency suspensions (PI2010-1), but it’s been three and a half years since the investigation began, and there’s still no final report.  Maybe one day the Commission will complete its work.  In the meantime, expect to see this story reported over and over and over again.