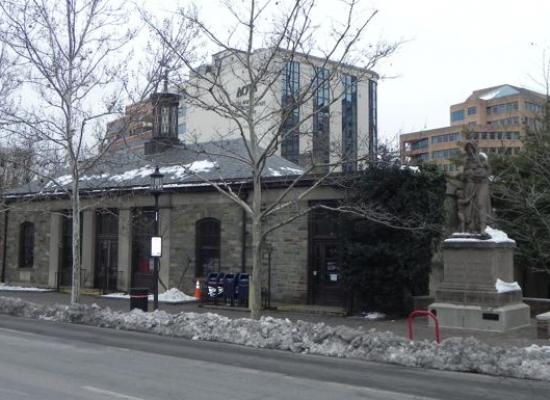 Head west out of USPS headquarters in L’Enfant Plaza and take Wisconsin Avenue north, and in less than 30 minutes, if the traffic isn’t too bad, you’ll find yourself in one of the richest and most highly educated communities in the country, Bethesda, Maryland.

In the middle of town at 7400 Wisconsin Avenue you’ll discover one of the more beautiful of the country’s post offices.  You can’t miss it because it’s right next to a large Madonna of the Trail statue, erected by the National Old Trails Association and the Daughters of the American Revolution to honor pioneer women.  Future president Harry S. Truman, then president of the Trails Association, presided over the dedication of the monument on April 19, 1929.

The Wisconsin Avenue post office was built by the New Deal in 1938.  It is included in the Montgomery County Master Plan for Historic Preservation, and it contains a mural by Robert Gates, who would later become the head of the Art Department at American University.  The mural shows farm women feeding their animals on one side, selling produce at the market on the other, which may be an allusion to the Farm Women’s Cooperative Market that began across the street in 1932.

Eleanor Roosevelt took a special interest in this post office, and on Dec. 12, 1938, in the middle of a day packed with personal engagements and public appearances, she visited the Procurement Division of the Treasury Department to look at the mural sketches Gates was working on.  The sketch was “charming,” wrote Eleanor in her diary, and then she added, “I think these post offices are making the country more and more conscious of decorative, artistic values.” 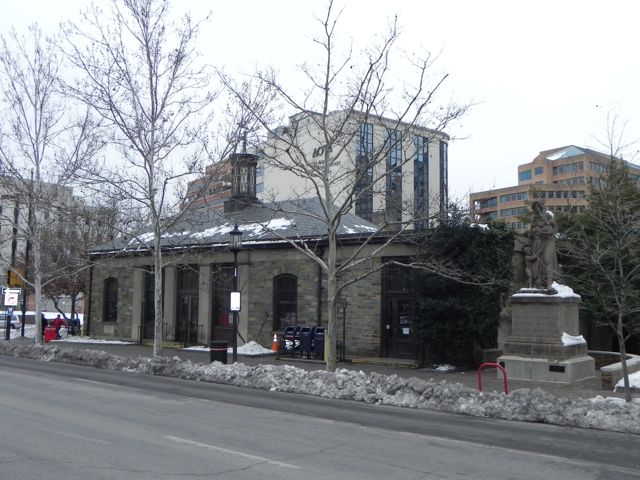 Dennis Perry is a real estate specialist who works in the USPS eastern facilities service office in Greensboro, North Carolina.  Asked why the Postal service was considering closing the Wisconsin Avenue post office, Perry replied, “To drive the highest and best use, to optimize our operations.”

I guess you’d have to ask the folks over in L’Enfant Plaza how it came to pass that the post office is not being used to its full capacity.  They probably moved most of the postal workers to other locations some time ago, leaving only a small retail operation, just as they’ve done at downtown post offices across the country.

There’s a meeting to discuss the consolidation plan on July 27.  If you can’t be there but would like to let Mr. Perry know what you think about “optimizing” this historic post office, you can give him a call at 336-665-2863 or drop him an email at [email protected].   I’m sure he’d be happy to explain why history doesn’t mean squat to the Postal Service.