Democrat Gazette: The future of the old post office on the downtown square in Bentonville, Arkansas, remains in question.  The building currently serves as the Benton County Courthouse Annex, and local officials are working on plans for a new courts building.

“If you’re going to use that site, it’s better to use the whole site and demolish it,” County Judge Bob Clinard said of the prospect of building on that site. “Incorporating the old post office into a new, 21st century-structure is about like taking a Model T and attaching it to a BMW.”

Glenn Jones with the Historical Preservation Commission said he will fight any plan that calls for the demolition of the old post office building. 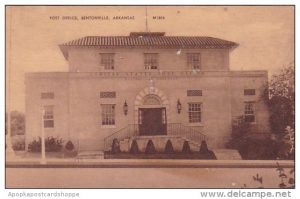 “Tearing down that old building has got to be the dumbest thing you can do,” Jones said.

The old post office at the intersection of Second and Northeast A streets — at the northeast corner of the downtown square in Bentonville — opened in July 1935, and was built for about $50,000, according to information from contemporary newspaper accounts gathered by the Benton County Historical Preservation Commission.  Read more.