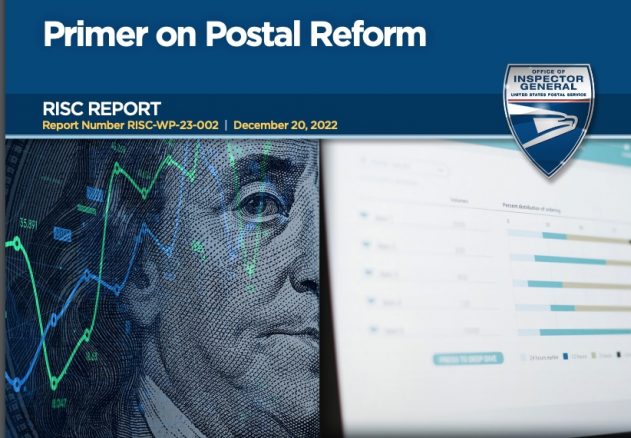 The USPS OIG has just released a report entitled Primer on Postal Reform. The report reviews the key provisions of the Postal Service Reform Act of 2022 (PSRA), signed into law on April 6, 2022, and “identifies potential opportunities and challenges they present for the Postal Service.”

As described by the IG, the financial provisions of the PSRA “will eliminate large unpaid obligations and reduce the size of the Postal Service’s annual budget deficit. At the same time, operational provisions will increase transparency and improve the quality of service provided to customers.”

The IG may be overly optimistic about how much the reform legislation will do to improve transparency and service. For example, the legislation requires the Postal Service to provide more information about on-time service performance by creating a publicly available dashboard. That may help make performance more available to the general public, but the big mailers already have several tools for tracking the mail and they don’t seem to have had much impact on performance.

The IG also notes that the legislation requires the Postal Regulatory Commission to conduct a review of the causes and effects of “possible inefficiencies” in the processing of flats mail. That’s been on the radar of the PRC for years, and there doesn’t seem to have been a lot of progress in that department.

Similarly, the PSRA directs the PRC to do a review that might lead to revised methods for attributing costs to postal products. That element of the legislation was primarily a concession to lobbying done by UPS and others who have for years been complaining about the cost attribution methodology. The Commission has reviewed the issues and complaints over and over again — and ended up in court with UPS several times — and it’s not likely that another review will lead to significant changes.

One provision of the PSRA that could prove interesting is its authorization of the Postal Service to enter into agreements with state/local/tribal governments to offer nonpostal services to the public on their behalf. The could include enabling customers to obtain hunting or fishing licenses from their local post office rather than requiring a visit to another government office. Granted, this is not a significant departure from current policies, which allow the Postal Service to provide nonpostal services to federal agencies, such as passport services, displaying posters and educational information about National Crime Victim’s Rights Week, and providing selective service registration at post offices. Still, expanding such government services would be a great way to enhance the role of local post offices.

Overall, the report is probably the best available overview of the PSRA. You can view it here.