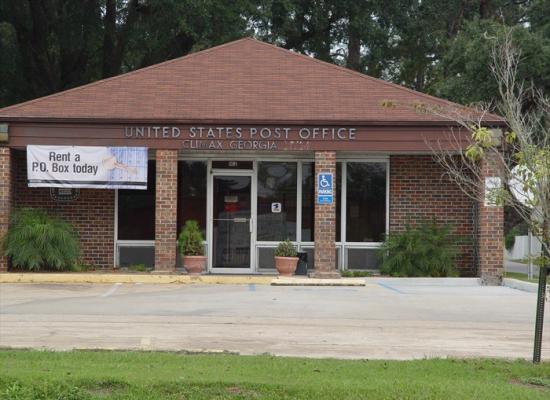 Mr. Wolaver is the president of the  Association of United States Postal Lessors (AUSPL), the country’s largest association of postal lessors, and his family has been in the business of owning post offices for five decades.  As his Memorandum to the PRC shows, Mr. Wolaver is not happy about what happened in Climax, and for good reason.

The post office in Climax was on the POStPlan list, set to be reduced to six hours a day.  Last July, the postmaster took the retirement incentive, which created a vacancy, which triggered a POStPlan review.  On September 28, 2012, Climax residents and city officials received the survey about the four POStPlan options, as well as a letter saying there would be a meeting with the Postal Service on November 8th.

Then in mid October, everyone got a second letter from the Postal Service saying the post office would close at the end of the month.  The Postal Service said that negotiations with the landord to renew the lease had broken down, so the office was closing for an emergency suspension.

Mr. Wolaver disputed the Postal Service’s story and explained that the negotiations were underway and the two sides weren’t very far apart, just 25 cents a square foot, as a matter of fact, but then in September he received notice from the Postal Service that they weren’t interested in renewing the lease and that they would be opening a Village Post Office in Climax.

The post office closed, Mr. Wolaver appealed to the PRC, and in April of this year, the Commission dismissed the case as “premature” because the Postal Service had not yet gone through a discontinuance review and had not yet issued a Final Determination to close the office completely.

It’s been over three months since the Commission issued its order dismissing the case, and nearly nine months since the post office was closed.  The Postal Service has yet to complete the discontinuance study and to issue a final determination.  There's no indication that the Postal Service will ever reopen a post office in Climax, in Mr. Wolaver's building or anywhere else, but it has never gone through the closing procedure required by law.

Mr. Wolaver’s Memorandum to the PRC is extremely thorough.  It runs to nearly 30 pages with all the exhibits, and a good portion of it was written by the law firm of Ford & Huff, the same firm that has been hired by the National Post Office Collaborate to fight the sale of historic post offices in Berkeley, the Bronx, and elsewhere.

The Memorandum to the Commission paints a devastating picture of the Postal Service's actions regarding the Climax post office.  This passage sums things up rather nicely:

“The most charitable view which can be taken regarding the Postal Service’s actions in Climax, and the notices given by the Postal Service, is that they are the result of the botched execution of contradictory plans; a more studied review indicates misdirection in the execution of a predetermined plan to close the Climax Post Office, and reduce postal services, while preventing any meaningful input from the community or this Honorable Commission.”

The language of the Memorandum and the fact that Ford & Huff been retained suggests that while Mr. Wolaver is looking for action from the PRC, he’s prepared to go to court if necessary.  Given the PRC’s track record on dismissing appeals, a courtroom is probably where things will end up.