Greeley Square is a small triangular park in New York City, bounded by West 32nd and West 33rd Streets, and Broadway and Sixth Avenue.  It’s a charming spot in a bustling area, with tables and chairs, a food kiosk, and a surprising number of trees for a small square on Broadway.

I’ve walked by Greeley Square hundreds of times, a couple of days a week in fact, and I never knew it by its right name.  I thought it was just part of Herald Square, which is officially the triangle just to the north.  Together they form a classic Broadway bow-tie square, similar to Times Square at 42nd Street.

Since 1949, there's been a post office about a block away from Greeley Square, just off Broadway on 31st Street.  It’s called Greeley Square Station.

Yesterday the Postal Service relocated the Greeley Square Station about five blocks away, to the Grand Madison Building at 225 Fifth Avenue.  (The entrance to the new post office is at 4 East 27th Street.)

The new facility is smaller and may end up a little congested, but at least it’s newly renovated, and it's in a beautiful historic building.  It's not far from the old location, and 27th Street at Fifth Avenue is a nice area, near Madison Square, the Flatiron Building and the chic NoMad Hotel.  There probably won’t be a lot of squawking about the new location.

The problem is not so much with the move per se as with how the Postal Service seems to have gone about it. 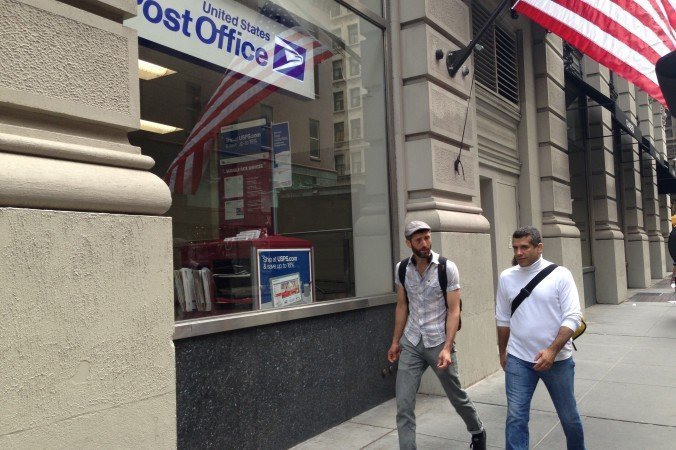 The new post office is about six blocks from Greeley Square, so continuing to call it Greeley Square Station may seem a little strange, but there’s a reason the Postal Service retained the name.  If it had chosen to close the post office completely, even if it were opening another one nearby, the Postal Service would have been required to go through a lengthy discontinuance process.  Moving retail services from one location to another, however, is a simpler matter, and the regulations are much less stringent than for a closure.

But there are still regulations that govern such relocations.  The Postal Service is required to follow the code of federal regulations on relocating a post office (CFR 241.4).  It's supposed to inform elected officials of its plans, and to either attend a regular meeting of those officials or hold a separate public meeting about the relocation.  There’s also a period during which customers can submit written comments, and once a final decision is made, there's an opportunity to appeal.  The public is supposed to be involved with the decision, not told about it a few days before the move takes place. 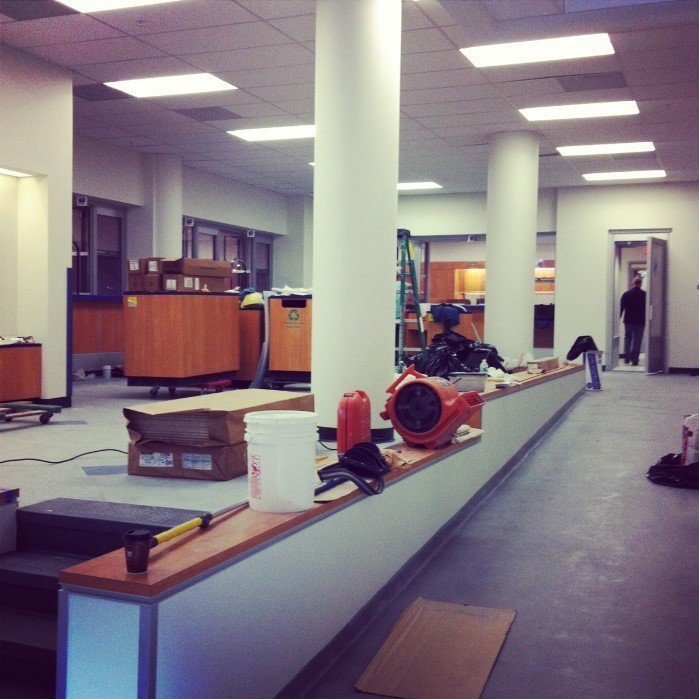 The Greeley Square relocation has been in the works for a long time.  The Postal Service says the move was necessary because a new lease could not be renegotiated with the landlord.  That lease expired in September 2012, but it must have been clear months before then that the Postal Service wasn't going to renew.  The  bidding notice for the renovation work at the new location is dated June 2012, and the work probably began in August.

It's not clear at this point what steps the Postal Service took to share its plans on relocating the Greeley Square Station.  The first that union officials heard about it was this week, after a sign was posted on the door of the post office.  Maybe others knew about it before then, but the earliest news item we can find is dated May 15, just a few days before the move took place. 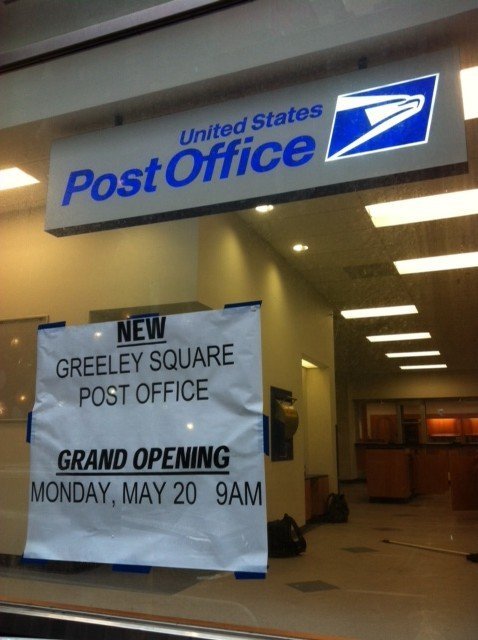 A similar relocation is also occurring up in Washington Heights, where the Washington Bridge Station is closing and being moved a block or two away.  Last month that relocation caught union and elected officials off guard.  At least in that case, however, it was widely known in the community back in 2009 that there was an issue with the lease, and at some point the Postal Service sent a representative to a city council meeting to discuss the proposed relocation.  (More on that relocation here.)

There are a number of other relocations going on in New York City right now, including the Bronx GPO, Peter Stuyvesant, Old Chelsea, and Tito Puente, and upset customers have expressed their concerns and anger at several recent meetings with postal officials.

Relocations like these are a matter of contention all across the country, from Berkeley to the Bronx.  The Postal Service is in the process of closing dozens of historic post offices, selling the buildings, and moving retail services to smaller spaces.  Despite the significant impacts of these changes on the community, the Postal Service says it’s just “relocating” the post office.

Moving the Greeley Square Station is not anywhere as serious as closing and selling a historic post office, but the Postal Service must still follow federal regulations, and it's not supposed to make such decisions unilaterally, without consulting customers and elected officials.  If it turns out that the Postal Service neglected to share its plans about Greeley Square, someone may have some explaining to do.