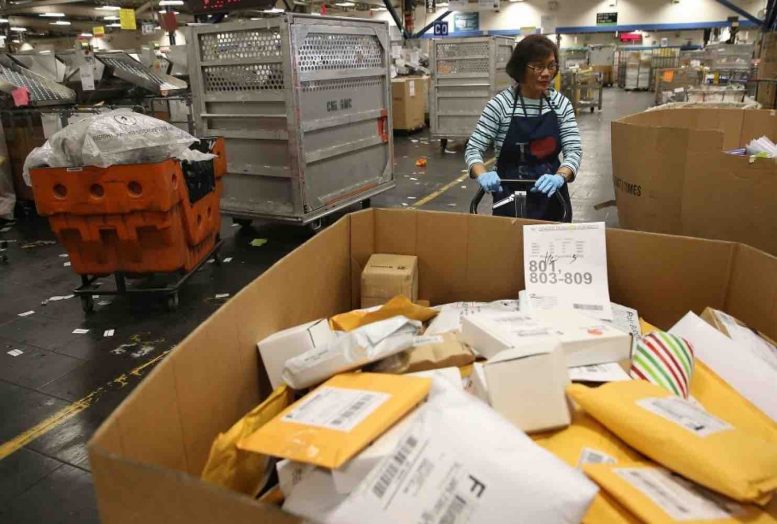 The Postal Service has released its service performance reports for the second quarter of the fiscal year, January 1 to March 31, 2015.  They show that it’s not just your imagination — the mail has been slowing down, and in some cases, by a lot.  The reports can be found on the USPS website here, and a more complete data set can be downloaded from the PRC website here.

This is the first period during which the new service standards were in effect.  These standards, which began on January 5, eliminated overnight delivery and added about a day to most delivery times.  The new reports show that even with slower standards the service performance has gone down compared to both the previous quarter and the same period last year.  The scores also fall well short of the Postal Service’s own targets.

The results shown in the reports will come as no surprise.  According to a Washington Post article on April 27 by Lisa Rein, “Preliminary internal data shows that the Postal Service did not meet even its lower targets for first-class mail during the first seven weeks of 2015, with letters that are supposed to take three days … arriving on time just 54 percent to 63 percent of the time.”

As it turns out, in some cases the performance for the full second quarter was even worse than the preliminary data revealed.  For example, for New York, only 44 percent of single-piece First Class mail was successfully delivered within the 3-to-5 day window. That’s compared to 82 percent for the same quarter last year.  Two-day delivery performance for New York fell from 93 percent in Q2 2014 to 74 percent for Q2 2015.  (A table comparing Q2 2015 and Q2 2014 for single-piece First Class mail is here.)

Overall, the national score for single-piece mail for the 3-to-5 day service standard went down from 84 percent to 63 percent, a decline of over 21 points — and more than 32 percentage points short of the target.

As the following table shows, in every category service performance for the second quarter of 2015 was down from the previous period last year, sometimes by a significant amount, and in no case did the score meet the target.  In some cases, it wasn’t even close. 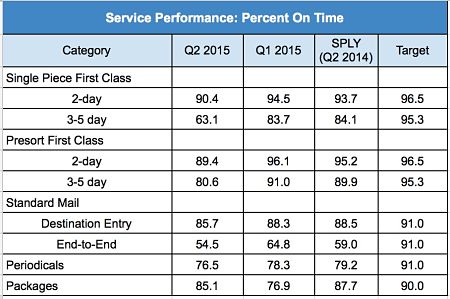 In the narrative accompanying the data, the Postal Service provides two explanations for the poor scores — bad winter weather and the operational changes at mail processing plants that went into effect on January 5th.

The weather may explain the performance problems in some places, like Chicago and Boston, where the amount of mail successfully delivered within the 3-to-5-day window was 51 and 53 percent, respectively.  But it can’t explain what happened in places like South Florida and Los Angeles, where only 48 percent of the mail was delivered within the 3-to-5 day service standard.

In most cases, the weather probably wasn’t the problem.  The delays were caused by the changes in mail processing operations.

As the Postal Service acknowledges in each performance report, “The mail processing operational window change that was made as part of the Network Rationalization plan was one of the most significant operational changes since automation implementation. These changes impacted the schedules for nearly all processing and transportation activities nationwide.”

The new reports may be viewed as particularly troublesome because the service standards themselves represent slower delivery times.  Mail that had been delivered overnight now takes two days, and much of the mail that used to take two days now takes three to five.  The latest performance reports show that a significant portion of the mail isn’t even making these more relaxed standards.

The Postal Service says that it is working on “stabilizing operations” in order to meet its new service performance standards.  But at many plants, the consolidation process has not even been fully implemented.  It’s possible that we will see even more delays over the coming months.

Amidst concern about these delays, the APWU will be holding a National Day of Action on May 14.  There’s more information about the protests here, and a list of locations where protests will be held can be found here.  For more about how the new service standards are slowing down the mail, see this previous post.