Add another historic post office building to the list of those being sold.  The Postal Service has announced that it plans to close the main post office at 59 North Fifth Street in downtown Reading, Pennsylvania, and put the building on the market.

The Postal Service says there’s too much space in the building for its needs, and it points to the reduced volume of mail in the electronic age as the explanation.

Actually, the space issues are a little more complicated than that. There are several postal facilities in Reading, and the Postal Service has spent the past couple of years shuffling operations around, including the consolidation of the Gus Yatron mail processing plant.  The Postal Service itself has created the excess space in the main post office, not declining mail volumes.

Reading’s main post office was built in 1940 under the New Deal.  (For some reason, on the USPS facilities list, it’s called the Downtown Station, and there’s no facility in Reading identified as the Main Post Office.)  It has 44,894 square feet, and about 23 employees — a few retail workers and several bulk mail handlers.

There’s also a large processing plant in Reading, the Gus Yatron facility on N. 13th Street, which offers retail services as well.  Built in 1986, it has 105,000 square feet.  There used to be over 200 workers at the facility, but in 2011 outgoing mail operations were consolidated with plants in Harrisburg and Lehigh Valley, and this summer incoming mail was consolidated with Harrisburg.  A couple of dozen workers are still at the facility running the retail and bulk mail operations.

In addition to the main post office and the Yatron plant, there’s a carrier annex at 1910 North 5th Street.  Built in 2000, it has 17,115 square feet and about 70 workers.  There are also several stations and branches in the Reading area. 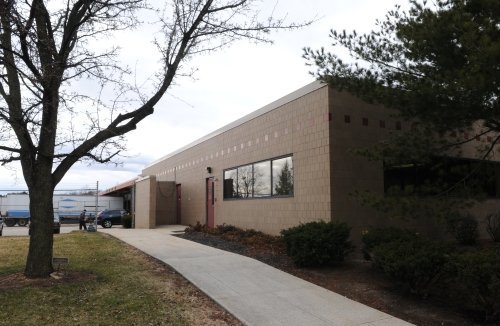 The consolidation of the Gus Yatron facility has opened up a lot of space in the building, and now the Postal Service wants to put it to use.  The plan is to close both the carrier annex and the main post office and move most of their operations to Yatron.  To replace the main post office downtown, the Postal Service will open a small retail office of 3,000 square feet, location yet to be determined.

The extra space in the main post office — the rationale for closing it — is thus not simply a result of declining mail volumes.  It is a situation that resulted from decisions made by the Postal Service to move operations around among its other facilities.

Cost savings, not so clear

It’s not clear how much this game of musical chairs will ultimately save the Postal Service.  The Post-Implementation Review (PIR) done on the consolidation for originating mail at Gus Yatron says it is saving $1.5 million a year.  That sounds hefty, but a look at the PIR is revealing.

In spite of the increase in the number of total employees, the total cost of labor at the three facilities decreased from about $93 million to $91.3 million — a savings of about $1.7 million a year.  That was possible because the average cost per worker decreased about $2,700.  It’s not clear how that happened.

Perhaps older employees making higher salaries took the retirement incentive and ended up being replaced by newer employees with lower salaries, or maybe there’s less overtime being paid out, or maybe it’s from using more part-time EAS workers.  Maybe it’s a combination of all these factors and others as well.

The Postal Service credits the consolidation with saving a total of $1.5 million annually.  Nearly all of the savings comes from cutting jobs.  The savings in maintenance costs ($330,000) was more than canceled out by increases in transportation costs ($511,000), a result of the fact that the mail needs to move around more now.

The $1.5 million saving in labor costs represents the elimination of around 28 jobs.  Many of the workers in these positions may have simply retired.  The consolidation probably spurred them to leave a little earlier than they might have, but the consolidation itself is not saving this money — the retirements are.  Increased use of part-time workers is also not a consequence of the consolidation per se — that was made possible by an agreement between management and union, not the consolidation.

The AMP study on consolidating the incoming mail from Gus Yatron to Harrisburg says this change will save another $7.2 million.  Nearly $4 million of that would come from eliminating 75 more positions.  Again, it’s hard to say how much of that savings comes from greater efficiencies as opposed to retirements, more part-time workers, etc.

Then there’s the issue of lost revenue being caused slower delivery times, an inevitable consequence of consolidations.  Nationwide, the potential losses might be on the scale of billions of dollars, but the PIR and the AMP studies don’t include that in the calculations.

The effects of the consolidations are already being felt in Reading.  Albright College, for example, receives hundreds, sometimes thousands, of pieces of mail daily in its post office box at the Yatron facility.  The school’s mail clerk has noticed that delivery times have slowed down, and checks from donors have been arriving days later than in the past.

The Postal Service owns both the main post office and the carrier annex, so there’s no rent to pay and nearly all of the savings in closing them would be maintenance and utility costs.  Most of the employees would be transferred to Gus Yatron or another facility, so there won’t be much additional savings in labor.

There will, however, be the added cost for leasing a small retail office downtown.  With parking and access for postal trucks, that could easily run to a few thousand dollars a month.

In the end, it’s difficult to say how much consolidating Gus Yatron, closing the annex, and replacing the main post office with a leased space will ultimately save.  The Postal Service has not presented numbers showing the total and the breakdown.

From 1940 to 2000, the main post office housed over a hundred clerks, carriers, and mail handlers.  By this time next year, it will probably have been replaced by a small retail office with a couple of workers.

The loss of all those jobs in the center of Reading cannot be good for small businesses and the local economy.  The main post office is also a historic landmark, and its symbolic value is impossible to measure.

But it’s a very real value, and that’s why at least two presidents have issued executive orders encouraging federal agencies like the Postal Service to locate their operations in urban areas, central business districts, and historic buildings.

Executive Order 12072, issued by President Carter, directs agencies to “give serious consideration to the impact a site selection will have on improving the social, economic, environmental, and cultural conditions of the communities in the urban area.”

Along similar lines, Executive Order 13006, issued by President Clinton, directs federal agencies not only to locate their operations in established downtowns, but also to give first consideration to locating in historic properties within historic districts.

The Postal Service hasn’t displayed much interest in obeying these Executive Orders, and it doesn’t look like that will change anytime in the near future.  In the meantime, the historic post office is downtown Reading is headed for closure and sale.