The Mid-Hudson Local of the APWU filed a Complaint today with the Postal Regulatory Commission requesting that the Commission order the Postal Service not to proceed with the consolidation of 55 mail processing plants that were previously scheduled for 2014.  The Mid-Hudson P&D in Newburgh, New York, is one of those plants.

The Complaint's full title summarizes its theme: "Complaint of Mid-Hudson Area Local and Consumers of USPS Regarding Failure to Revise and Update Information to the Unions & Consumers on the AMP Study for Mid-Hudson P. & D. Center, N.Y."

The Mid-Hudson Local makes a number of important points in its Complaint:

The Complaint argues that because of these problems in the process, the Postal Service should hold a new meeting about the Mid-Hudson plant, provide a new cost-savings analysis based on updated data, and share un-redacted reports with the union.  Until these things are done, argues the Complaint, the PRC should “direct the Postal Service to stop any further AMP implementations.” 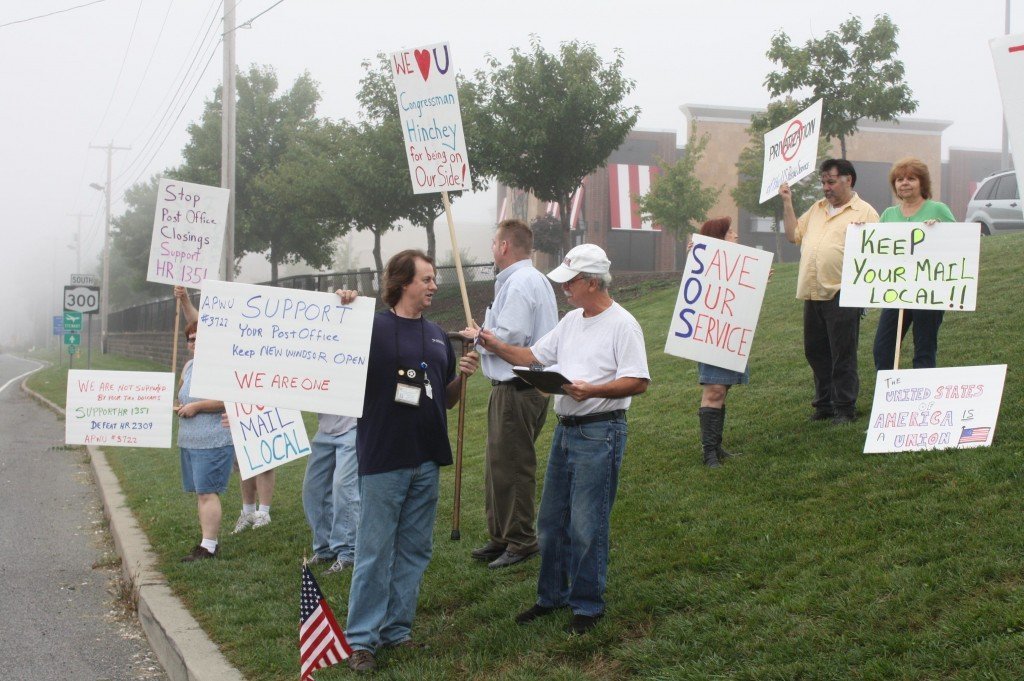 “The USPS has continued to keep the employees, the unions, the customers, the community and the PRC in the dark as to the adverse effects of all the closings and consolidations,” says the Complaint.  “We are being used as pawns so that pressure is placed on Congress to do their job and release the USPS from PAEA requirements to pay into the health plan fund 75 years in advance, and to attempt to recoup the overpayments made over the years that have not been returned to the USPS.  This is being done at the detriment of the communities and the workers.”

It will be interesting to see how the PRC handles the Mid-Hudson Local’s Complaint.  Last year, the Commission spent many months studying the Postal Service’s Network Rationalization plan.  It was a challenging task, partly because of the complexity of the mail-processing network, but largely because the Postal Service kept changing the plan, even while the Commission was reviewing it.

One of the main changes in the plan was the Postal Service’s decision to implement the consolidations in two phases.  Phase 1, which encompassed 140 plants, began last summer and is underway right now.  Phase 2, which included 89 plants, was to have taken place in early 2014.  But now the Postal Service has changed the plan yet again and moved 71 plants on the phase-2 list up to 2013.

That basically means that the PRC rendered an advisory opinion on a plan that was not the one currently being implemented.  Much of the data the Postal Service provided the PRC about cost savings and other aspects of Network Rationalization are therefore no longer applicable and accurate.

In speeding up the consolidations, the Postal Service is doing just the opposite of what the Commission recommended.

The PRC’s review of Network Rationalization also found that a significant number of consolidations could take place without having a detrimental effect on service standards, specifically on overnight delivery.  The Commission seemed to be suggesting that the Postal Service might be better off just doing the phase-1 consolidations and not proceeding with phase 2 at all.  The Postal Service is ignoring that recommendation as well.

Given how little the Postal Service seemed to care about the Commission’s advisory opinion last year, it’s not surprising it would be disregarding PRC recommendations again.  As a result, it's hard to imagine the PRC will take a very active role at this stage of the game.

Still, the Mid-Hudson Local deserves kudos for taking this initiative and for giving the PRC an opportunity to revisit Network Rationalization.  Maybe the Commission will seize the moment and raise some important questions about why the consolidations are being speeded up and what adverse effects that may cause.

But if you’re looking for the Commissioners to put a stop to the accelerated consolidation plan, don’t hold your breath.

UPDATE: The APWU Red Bank Local has filed a similar complaint with the PRC concerning the consolidation of the Monmouth P&D Center in New Jersey.