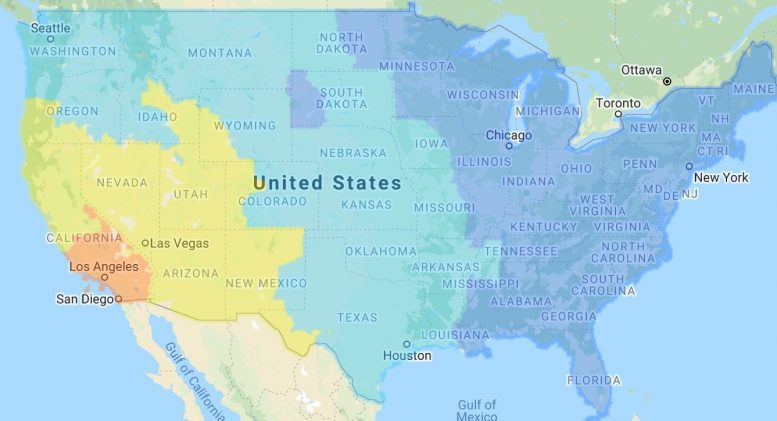 The Postal Service has requested an Advisory Opinion from the Postal Regulatory Commission concerning its plan to relax service standards on First Class mail and Periodicals. Much of the mail that is now expected to be delivered in 2 days would shift to a 3-day standard, and a lot of 3-day mail would change to a 4 or 5-day standard. The main rationale for these changes is to allow more mail to be transported by ground rather than air, which takes a day or two more, and to help the Postal Service achieve higher and more predictable on-time performance scores. (A dashboard with more details, documents and charts can be found here.)

This is not the first time the Postal Service has asked for an Advisory Opinion on relaxing service standards. In 1989 the Postal Service proposed reclassifying some destinations from overnight to 2-day service, and others from 2-day to 3-day. Its rationale was that market research indicated that customers preferred “consistency” to “speed.”  A slower standard would, the Postal Service said, reduce its reliance on air transportation, which suffered “randomness of failures.”

In its Advisory Opinion, the Postal Rate Commission found that “the Postal Service’s market research, which formed the main justification for the proposal, failed to measure customer preferences accurately.” Plus, said the Commission, “the Service did not present estimates of the cost savings to itself or cost effects on its customers.”

In December 2011, the Postal Service again proposed relaxing service standards, this time to make it possible to consolidate over 200 mail processing plants. The PRC’s Advisory Opinion was skeptical of the USPS cost savings estimate and also recommended “alternatives that would preserve service levels.”  The Postal Service went ahead with the plan anyway.

In July 2012 it implemented the first phase of the plan, and the “interim” service standards eliminated overnight delivery for about 20 percent of the mail and added a day to some 2-day mail. In January 2015, the “final” standards were implemented and overnight delivery was ended all single-piece mail. Together, the two phases added an extra day of delivery time to more than a third, maybe half, of First Class Mail.

The erosion of standards 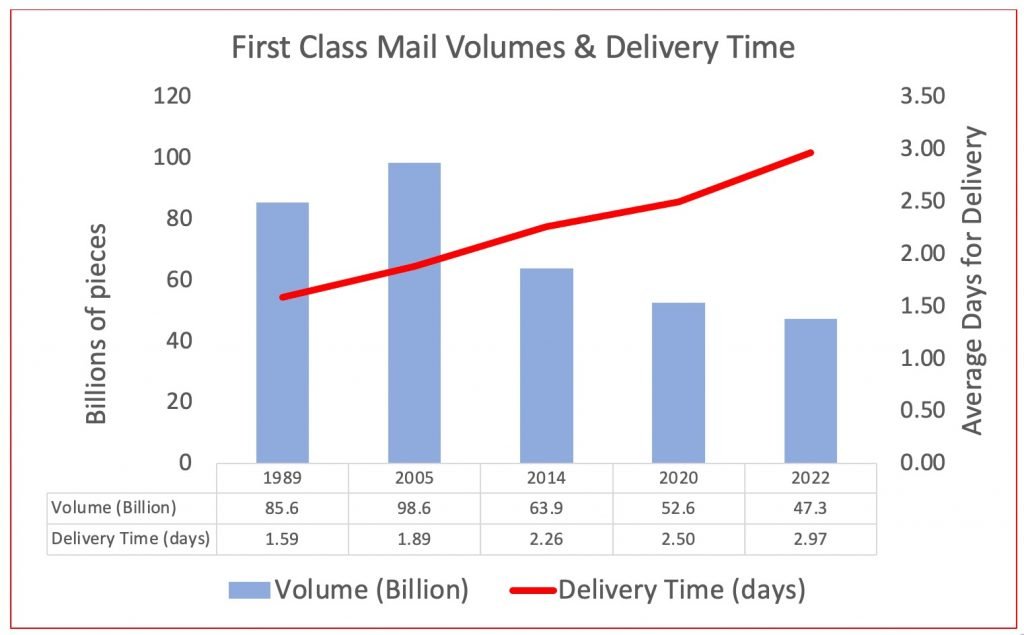 These delivery time numbers, it may be noted, are slightly different from the data reported by USPS witness Thomas Thress for the Advisory Opinion. Charts in his testimony indicate that the current average is 2.5 days for single-piece mail and 2.4 days for presort. That’s about 2.43 days for First Class overall; an 18 percent increase would lead to an average of 2.87 days. The numbers in the chart above were derived from the following chart, which shows the percentage of mail volumes subject to the various standards. The sources for this chart are N89-1 Advisory Opinion (p. 1); 2014 Fact Sheet; 9/21/11 Federal Register notice; and USPS Delivering For America 10-year plan.

With each change in service standards, the goal has been to cut costs and increase the “reliability” and “predictability” of delivery times. But the savings estimates have been consistently disputed because it’s not clear how much lowering standards has driven away business and accelerated electronic diversion. Operational changes have also not generally succeeded in reducing costs, at least as much as projected. And the speed-versus-reliability issue is tricky because it all depends on how you ask mailers the question, and besides, they don’t all want the same thing.

But what is clear is that the plan currently being reviewed by the Commission represents yet another stage in the continuing erosion of service standards and delivery times.

The Request for an Advisory Opinion, the USPS witness testimonies and several library references explain the plan in considerable detail, but the materials don’t provide a very clear picture of what the changes will look like in terms of geography. What’s missing are some maps.

The Postal Service does publish maps that show the regions subject to the various service standards. They’re updated regularly, and they can be found on PostalPro here.

For example, here’s the service standard map for First Class mail originating in St. Louis, Missouri, SCF 631. (SCF refers to Sectional Center Facility, the processing and distribution center — a P&DC — that serves a geographical area defined by one or more 3-digit zip code prefixes.) The orange area indicates the area that is under the 2-day standard, and yellow, the 3-day standard. As you can see, the entire contiguous United States gets 2 or 3-day service, while 4 and 5 day service is reserved for Hawaii, Guam and parts of Alaska. 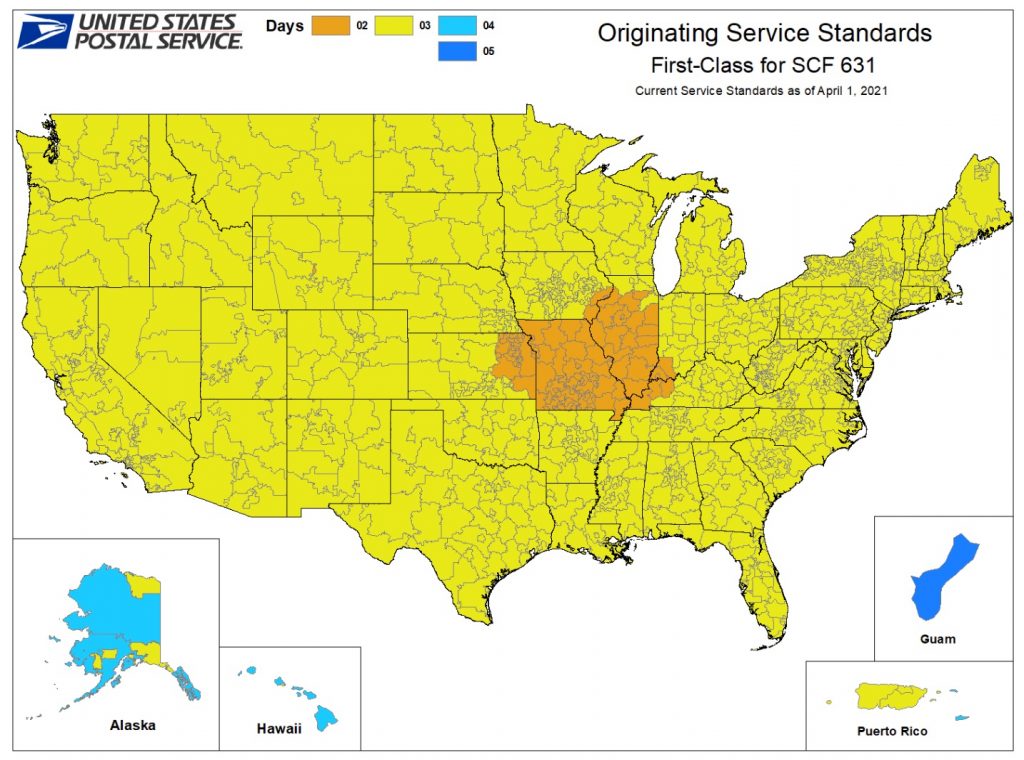 Should the proposed service standards go into effect, the Postal Service will eventually provide new maps like this one. In the meantime, we can make some preliminary maps based on materials submitted for the Advisory Opinion.

Included in the docket is a spreadsheet with the current and proposed service standards for every 3-digit zip code pair (USPS-LR-N2021-1/3). So, for example, the pair 631-125 represents mail originating in St. Louis (SCF 631) with a destination in the Mid-Hudson region north of New York City (SCF 125). There are about 900 3-digit zip code prefixes, and each is paired with every other 3-digit zip, so the spreadsheet shows data for over 810,000 pairs.

Using this data set, one can create service standard maps comparable to those on PostalPro. Below are a few examples, created with the help of an excellent mapping tool you can find at randymajors.org.

The following maps use the same color coding as the PostalPro’s maps: orange indicates a 2-day service standard; yellow is 3-day; sky blue is 4-day; and blue is 5-day. You can click on a map below to see a larger version, or click on “interactive version” to go a Google map where you can search for any location (or click anywhere on the map) to find a place name and corresponding service standard (on the upper left).

Here are a couple of maps for SCF 631, St. Louis, based on the zip pairs. The first is just another version of the PostalPro map showing current service standards; the second shows the service standard areas that would occur under the proposal. 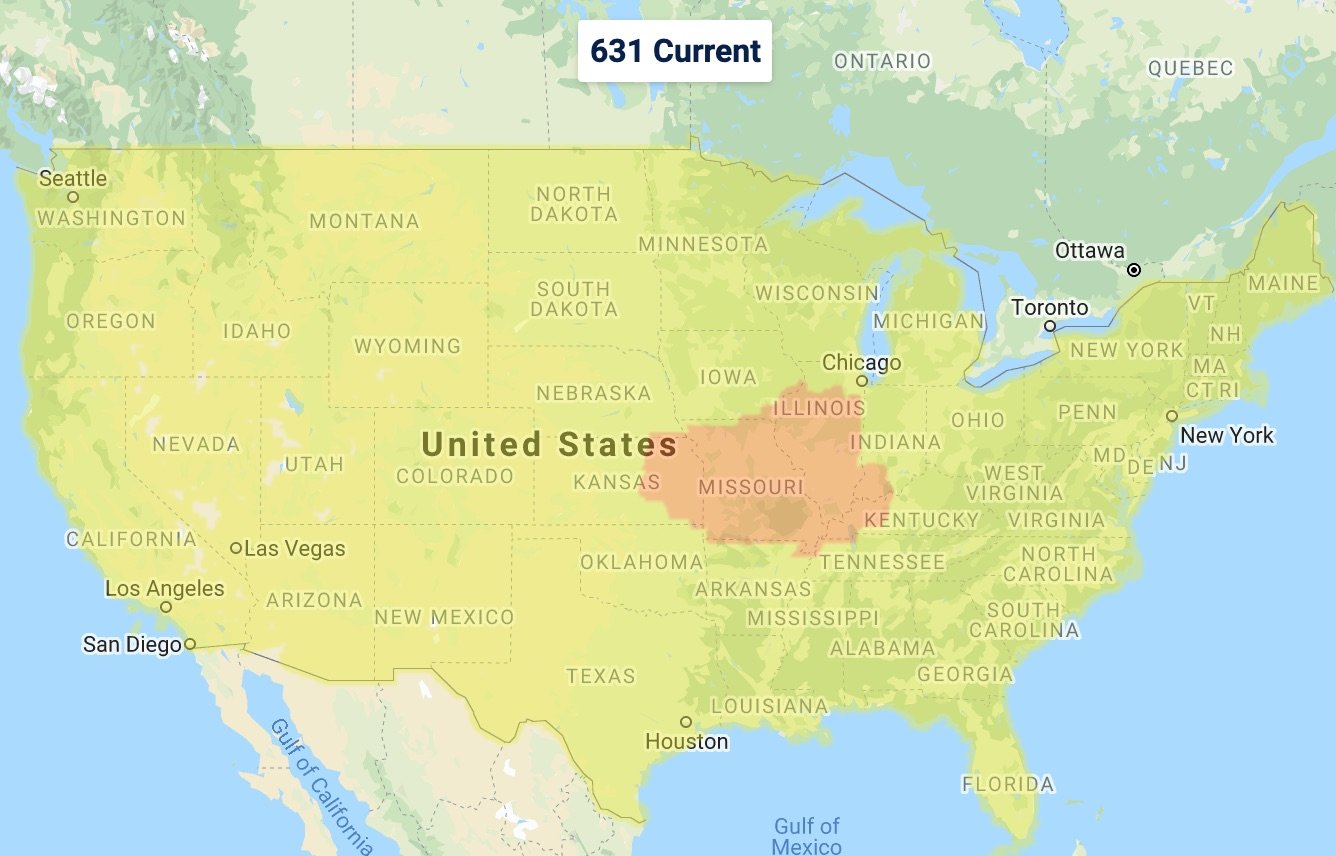 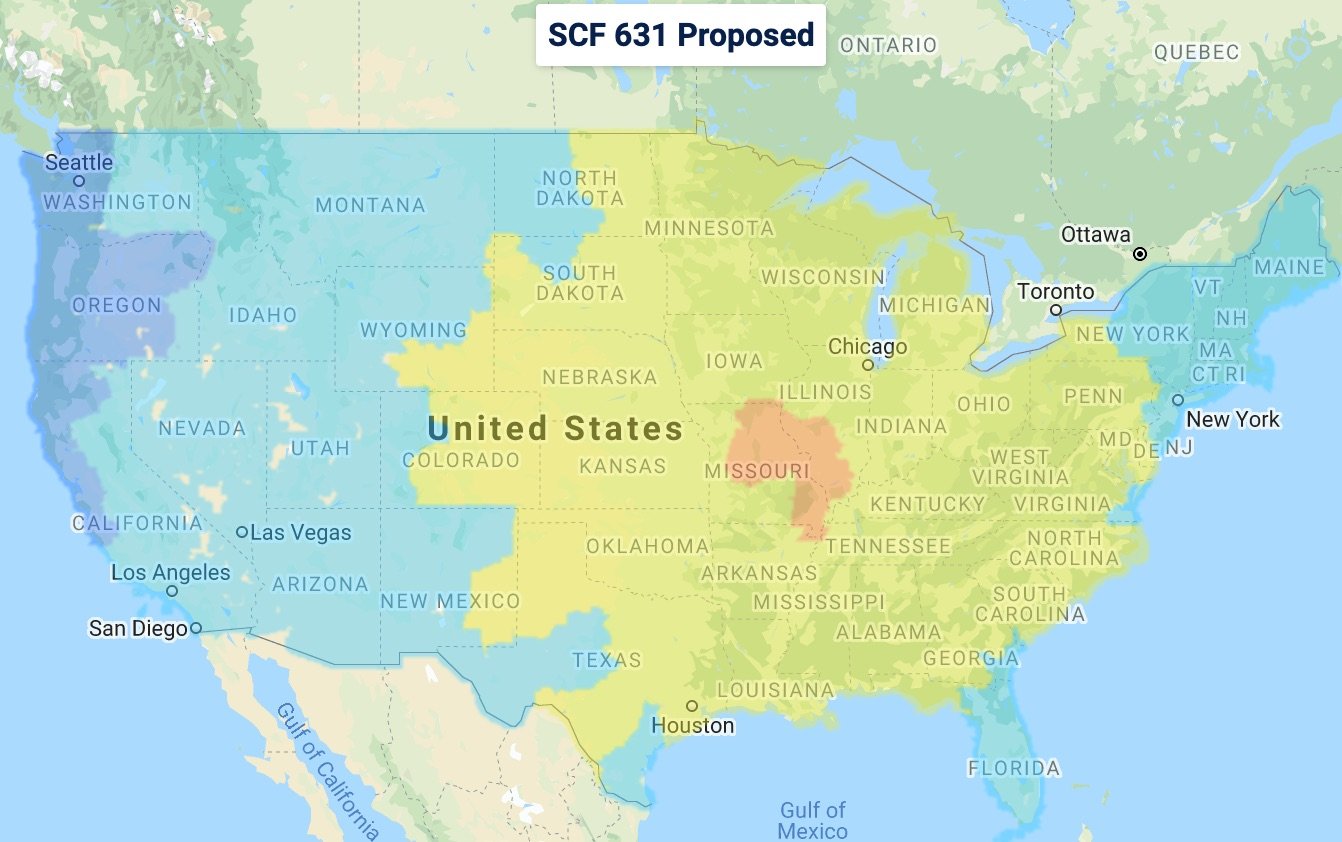 For mail originating in the St. Louis SCF, the proposed changes in standards would mean the 2-day area will get smaller (more on that below) while the current 3-day area (the rest of the country) would either remain 3-day or become 4-day or, for the West Coast, 5-day. Overall, 41 percent of the pairs would be downgraded, with about 3 percent of them going to 5-day.

These service standards are defined primarily in terms of drive time and distance. The 2-day standard applies when the mail piece requires only one processing center (it goes from post office to P&DC to post office, or it’s presorted and dropped directly at the P&DC). Under the proposal, a 2-day standard will also apply if the mail goes from one processing center to another when they’re less than a 3-hour drive time apart (about 140 miles or less).

If we travel a bit further west from St. Louis, there’s an interesting aspect to the mail originating in Salina, Kansas, which is the SCF region (669) for Lebanon, Kansas — the geographic center of the country. 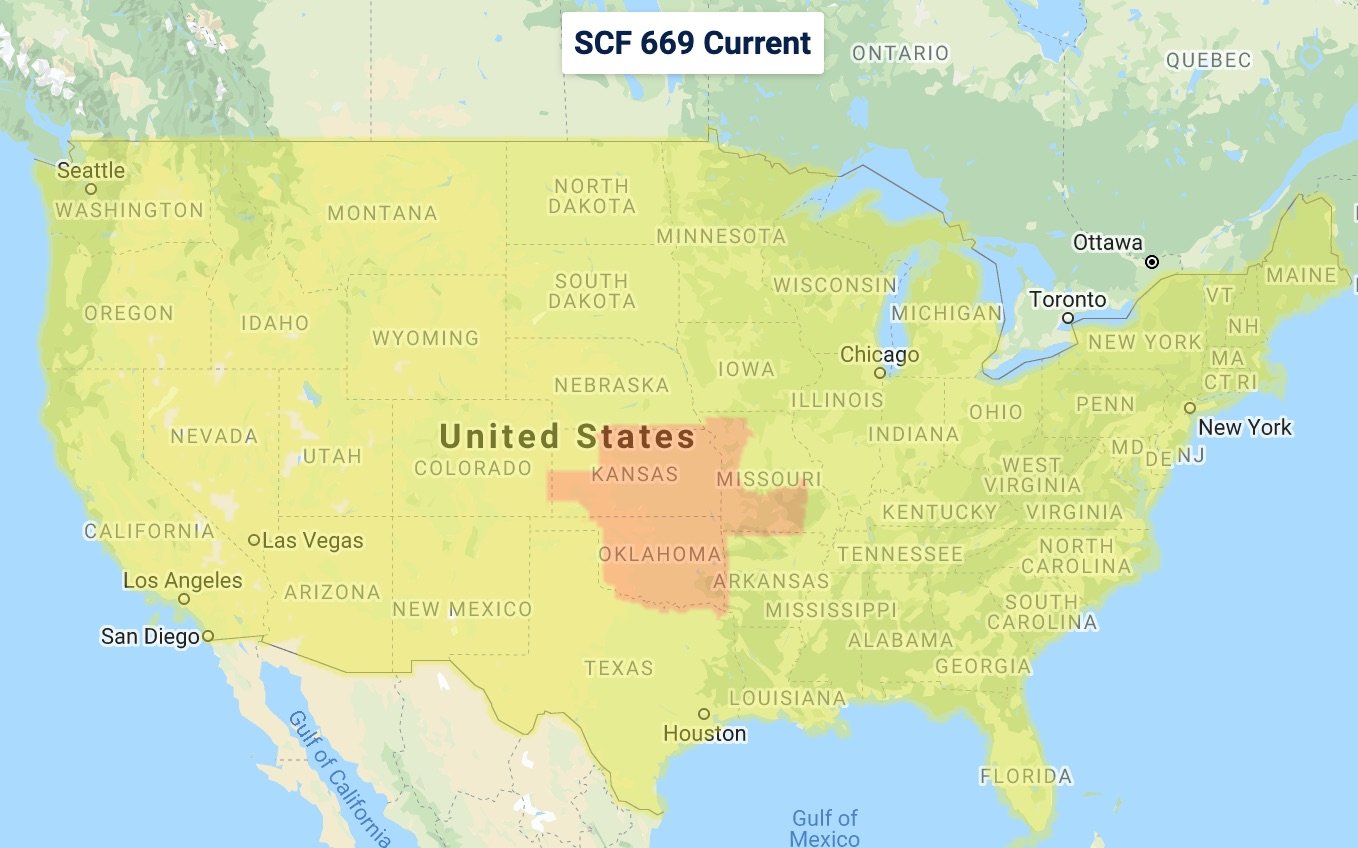 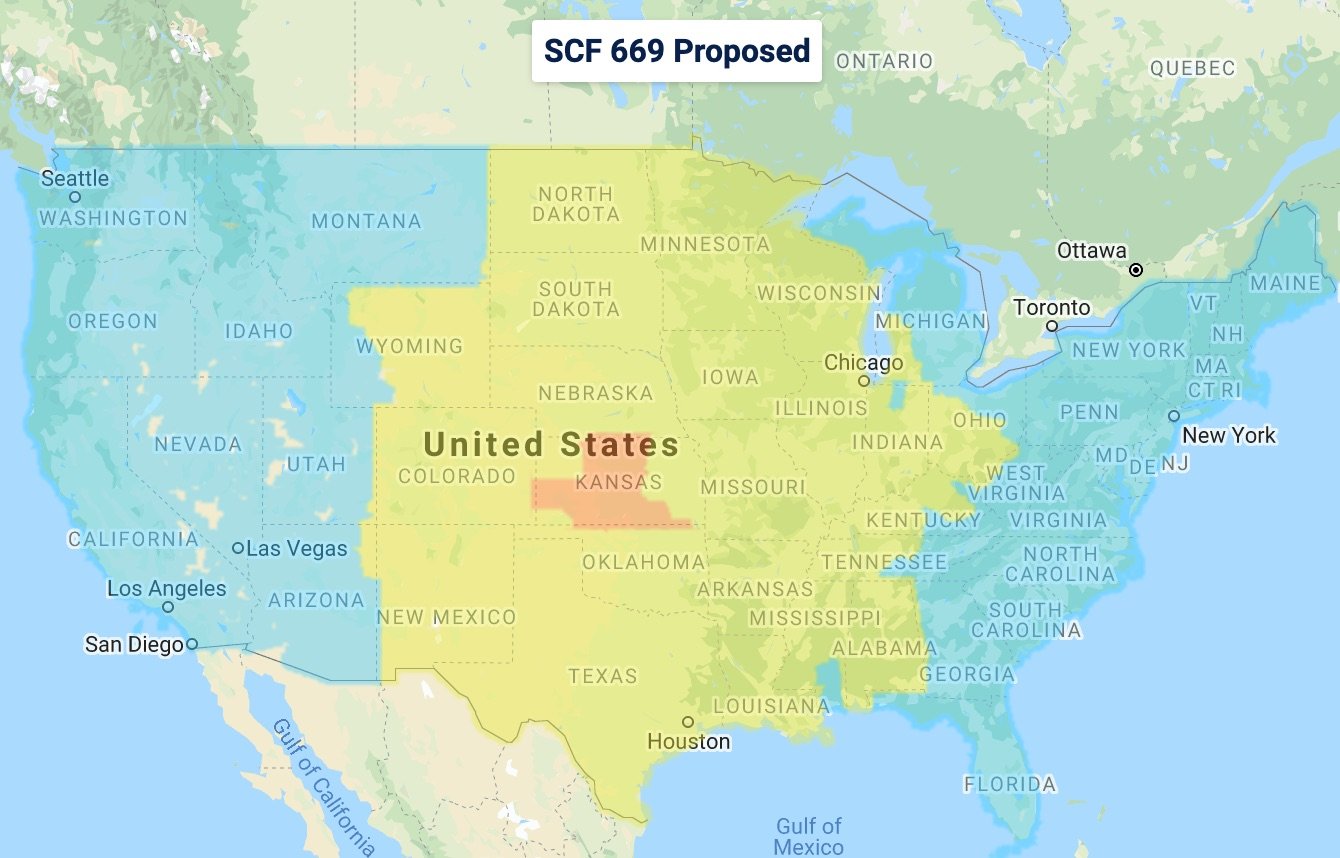 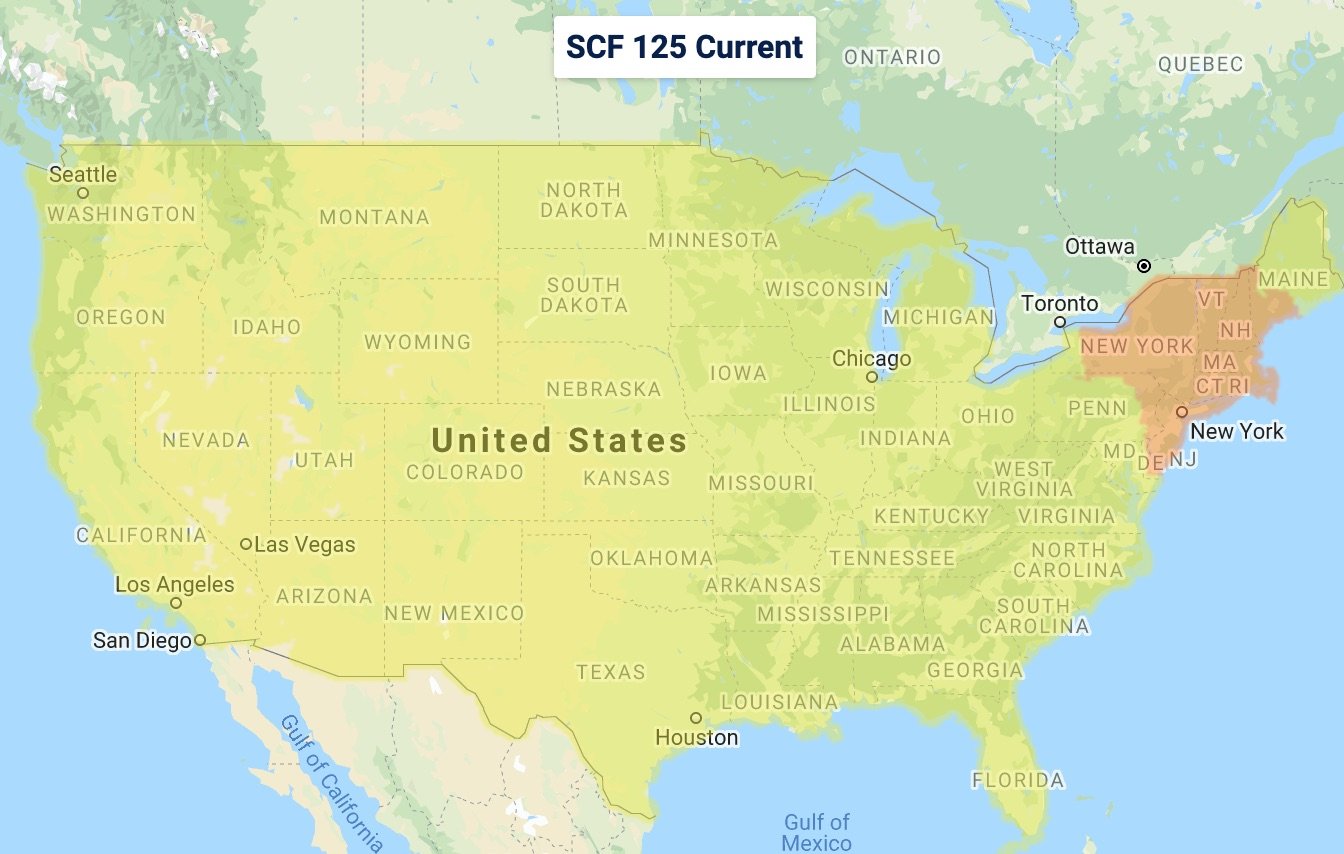 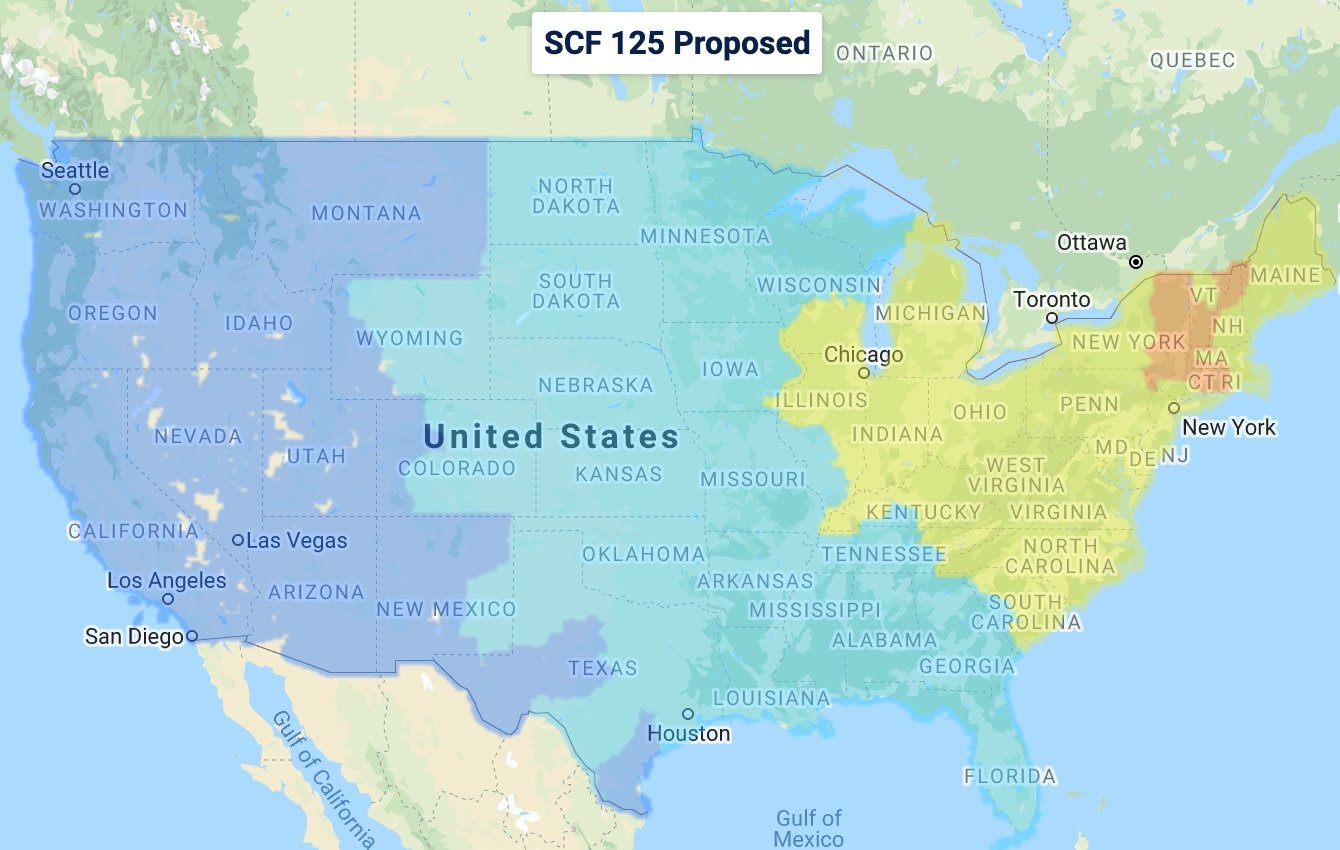 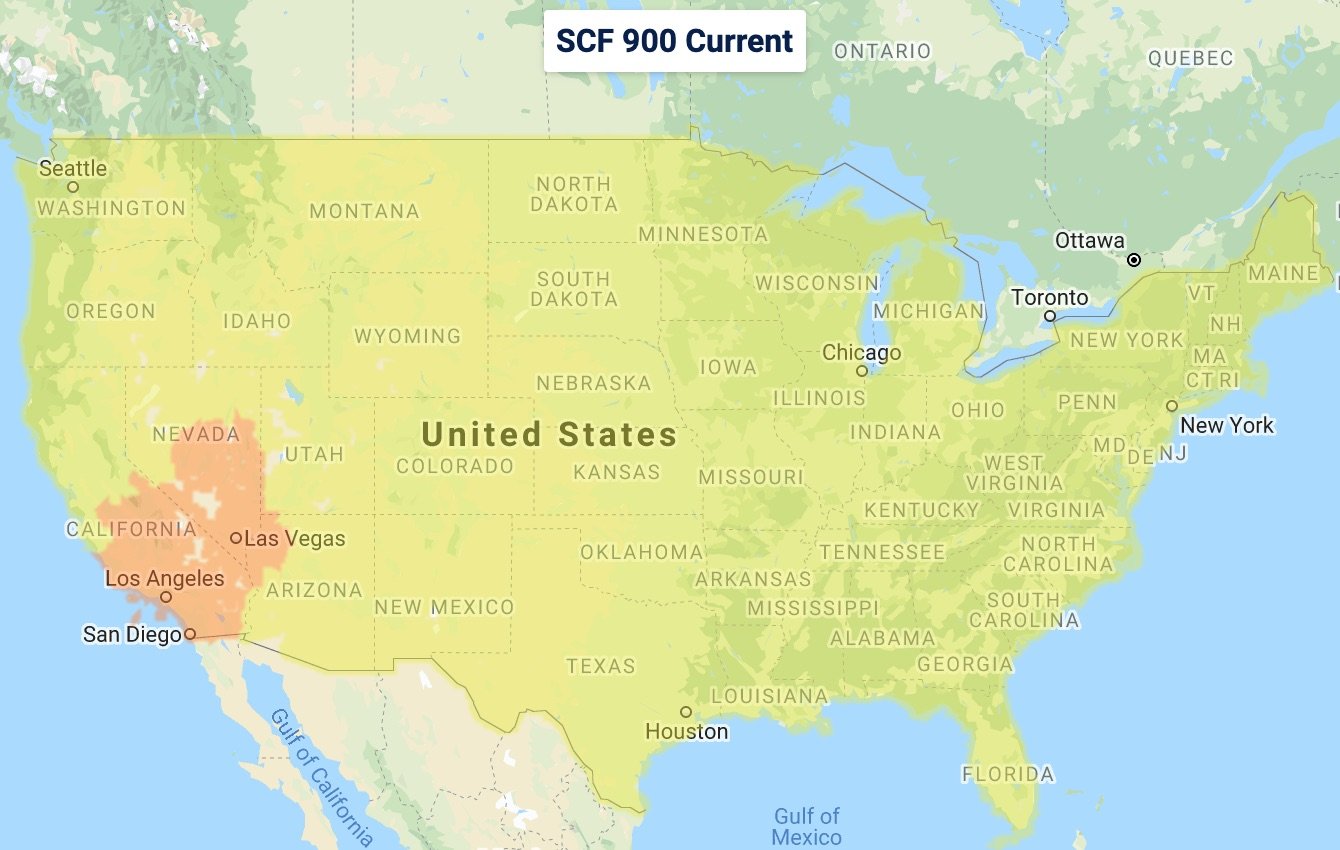 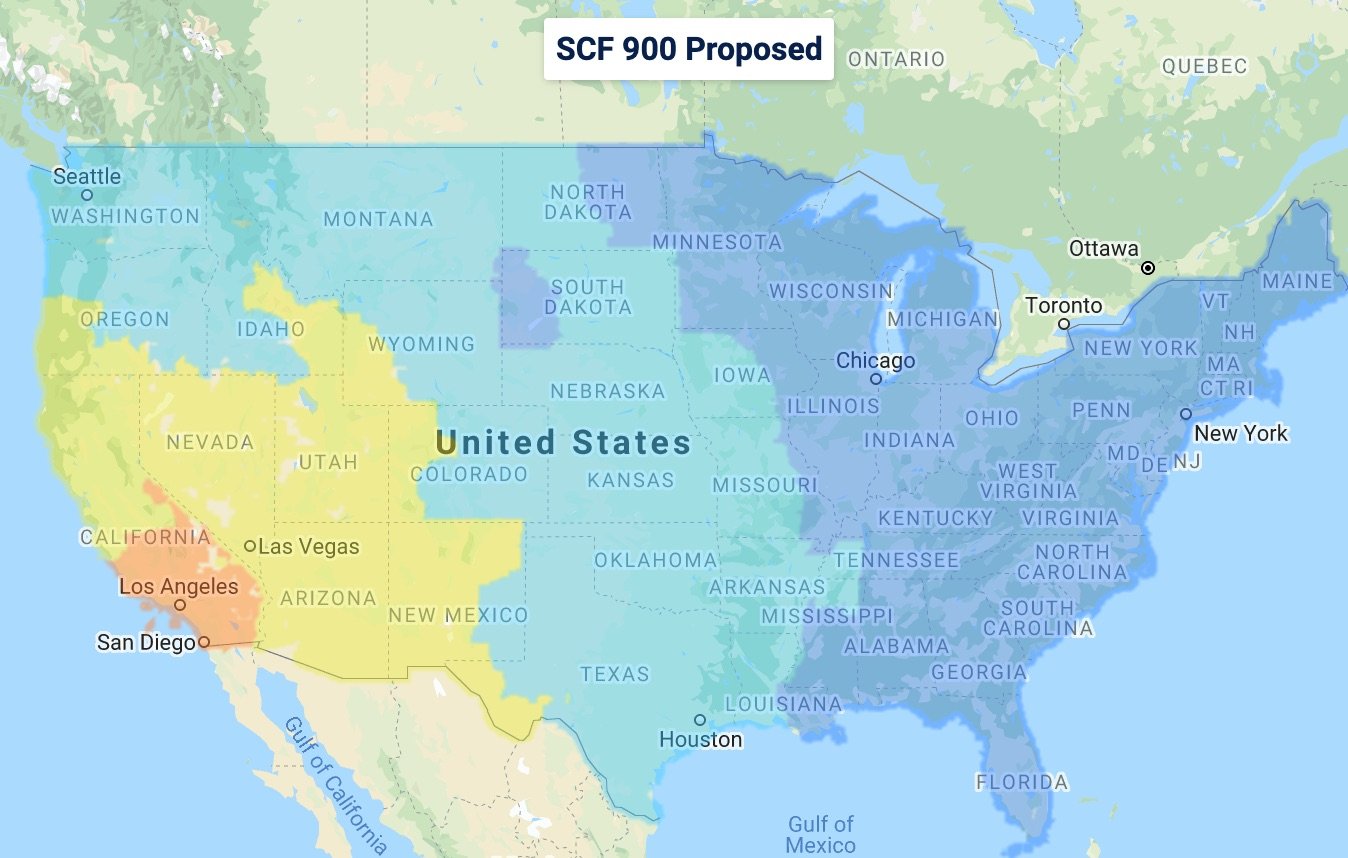 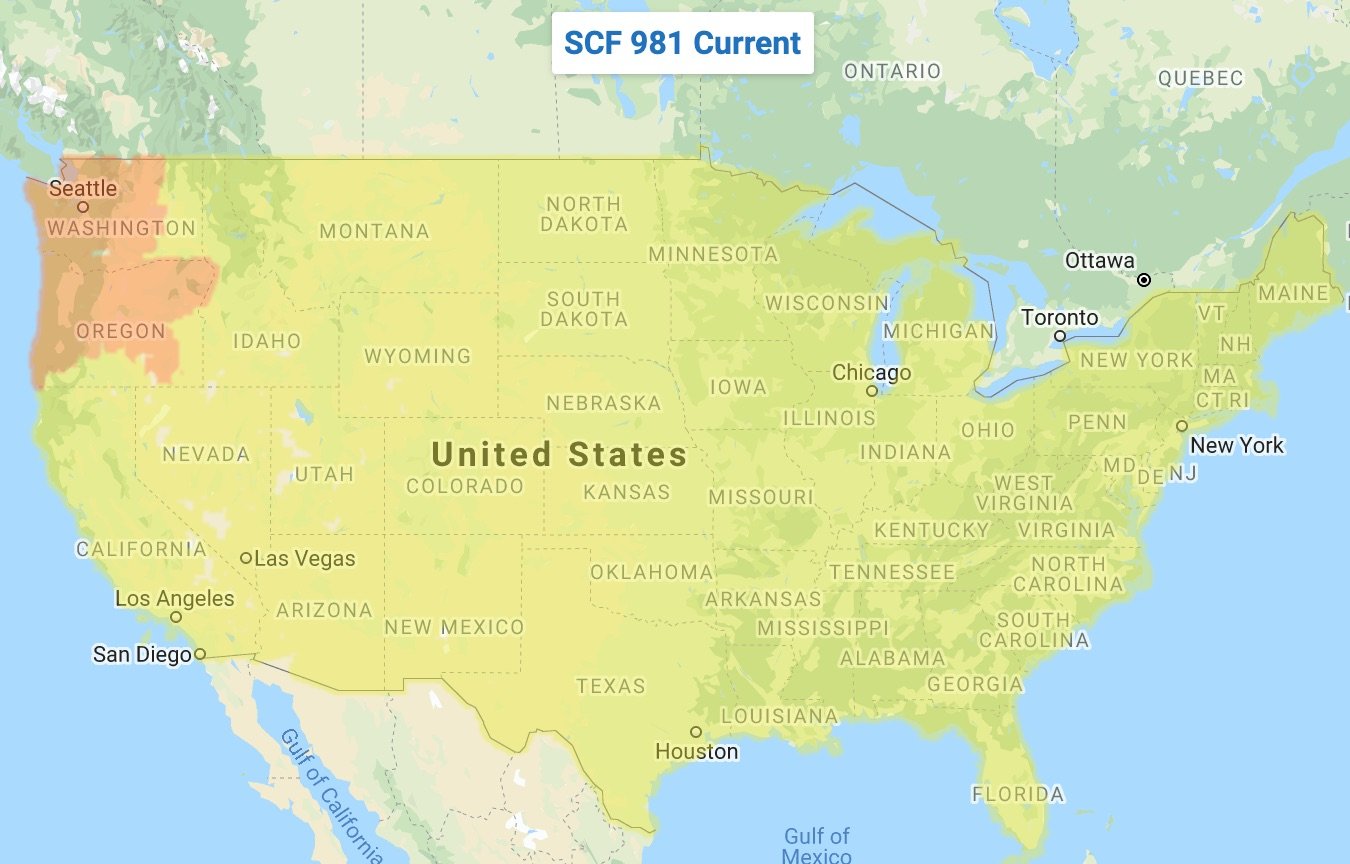 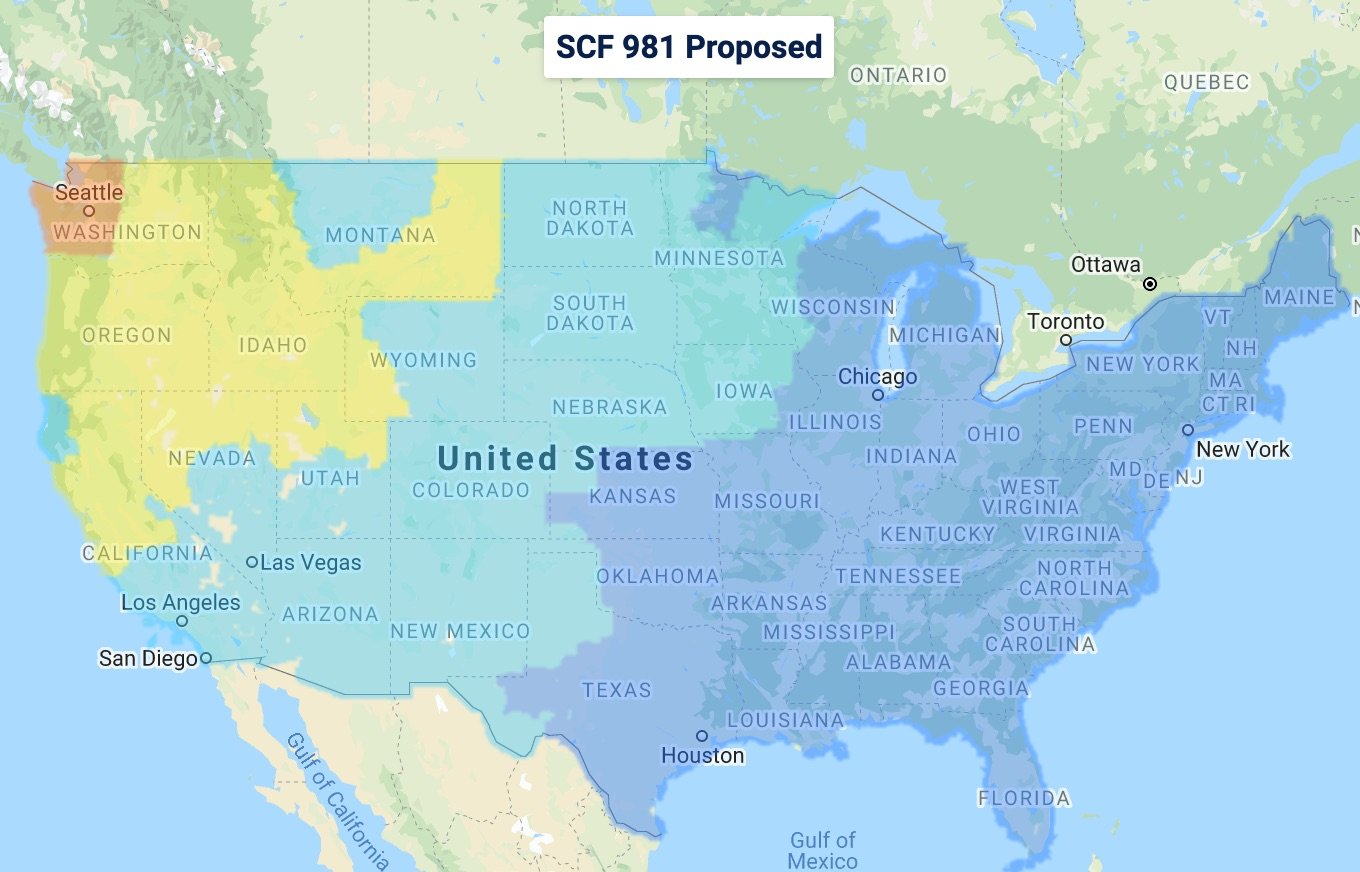 Is the plan fair?

Those examples are generally at the high end of impacts from the proposed plan. Looking at all 816,300 zip code pairs, about 61% would experience a downgrade, with 17 percent shifting from 3-days to 5-day.

To get a better sense of how different regions of the U.S. would be impacted by the proposed standards, here’s a map showing the zip code zones based on the first digit of the zip, followed by a chart that shows the percent of zip code pairs subject to each service standard within the zone. 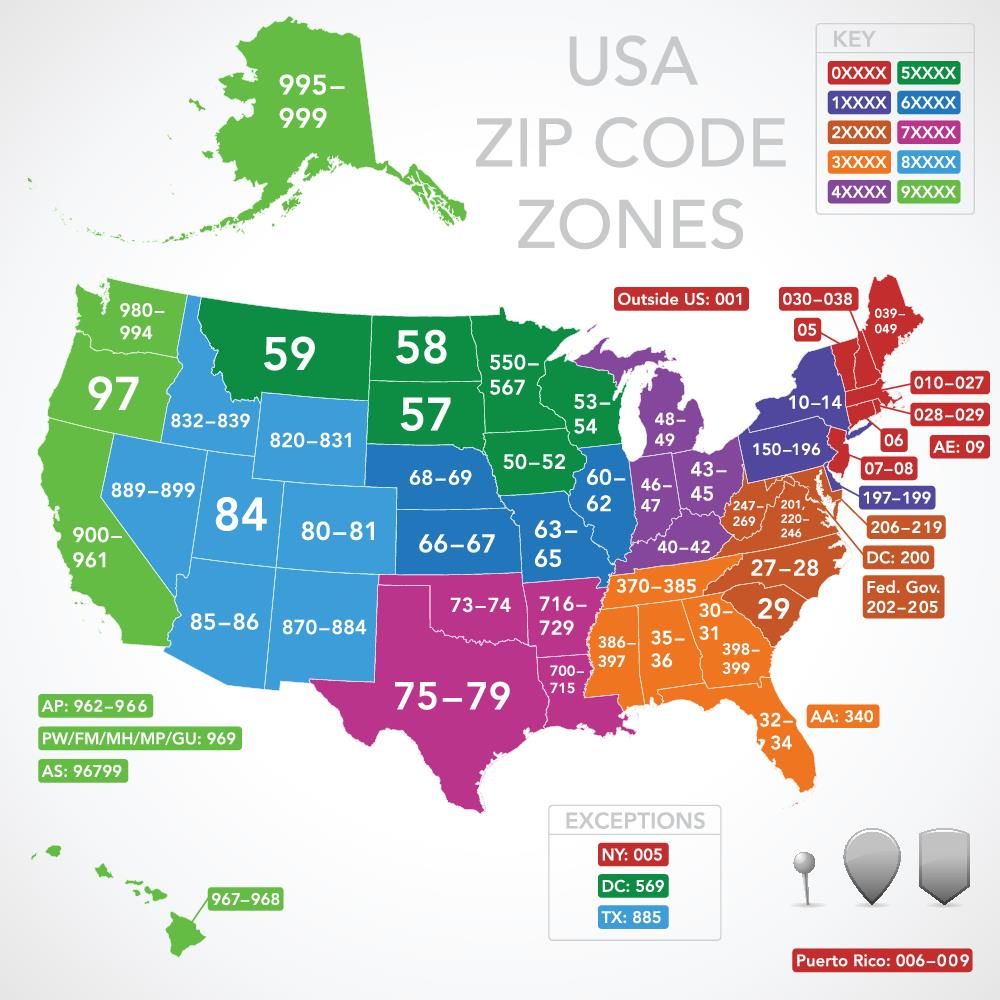 The Postal Service has also provided volume numbers for each zip pair (based on the second highest Wednesday in March 2019). Overall, the Postal Service estimates that about 40 percent of First Class volumes would experience a downgrade under the proposed standards. But that’s the average, and again, there’s a considerable degree of variation place to place. Zone 2, for example, could see 26 percent of its volumes downgraded, while zones 7 and 8 could see over 50 percent of their volumes downgraded.

These variations raise an interesting question: Would the plan discriminate against people who send or receive mail in areas that experience more downgrades than other areas?

According to 39 U.S.C.§403, “in establishing classifications, rates, and fees under this title, the Postal Service shall not … make any undue or unreasonable discrimination among users of the mails.” Plus, 39 U.S.C.§404 says rates for letter mail “shall be uniform throughout the United States, its territories, and possessions.” A Forever stamp is thus supposed to get your letter from one part of the country to another in no more than three days, regardless of the distance it must be carried, where it originated, and where the destination may be.

Uniform rates and avoidance of discrimination are essential aspects of the law and the Postal Service’s universal service obligation, but it’s not clear how they might apply to the proposed changes in service standards. Imagine, though, that the Postal Service proposed tying rates for First Class mail to distance, origin and destination. Congress dropped distance-based letter rate categories in 1863, and that idea would never fly now. In many respects, however, the proposed plan does something similar. Slowing down the mail reduces its value, so it’s like a price hike. And under the Postal Service’s proposal, not everyone will experience the downgraded service to the same degree.

The national maps show how much of the country will shift from a 3-day standard to a 4 or 5-day standard as a result of cutting back on air travel, but there’s another aspect to the changes in service standards. It’s about how the area that gets a 2-day standard is contracting, with many zip code pairs shifting to 3 days.

This phenomenon has occurred before. In 2015, under the Network Rationalization plan to consolidate mail processing centers, the Postal Service made significant reductions in the size of the area subject to the 2-day standard. 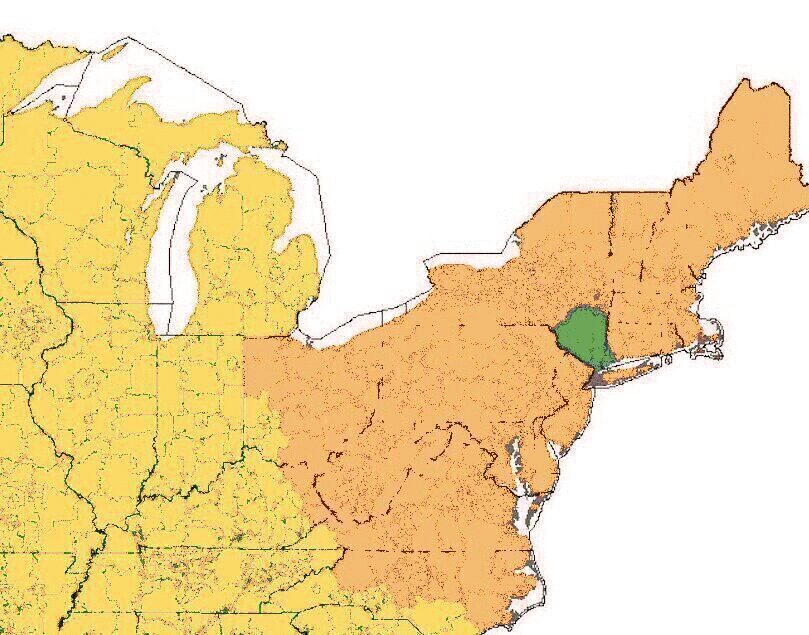 The first map shows that pre-2015, there was still a region with an overnight service standard (green), and a very large portion of the Northeast was under a 2-day standard — virtually any area within a 12-hour drive time between the MidHudson P&DC and another processing facility. After the 2015 changes, the overnight standard was eliminated (except for a small percent of presort mail), and the 2-day area contracted significantly because the drive time between facilities was reduced to 6 hours. Under the proposed plan, the 2-day area would contract again and apply only to pairs where the distance between processing facilities is 3 hours or less (up to 140 miles).

Here’s a closer look at the 2-day area before and after the proposed changes for the SCFs we’ve been looking at. 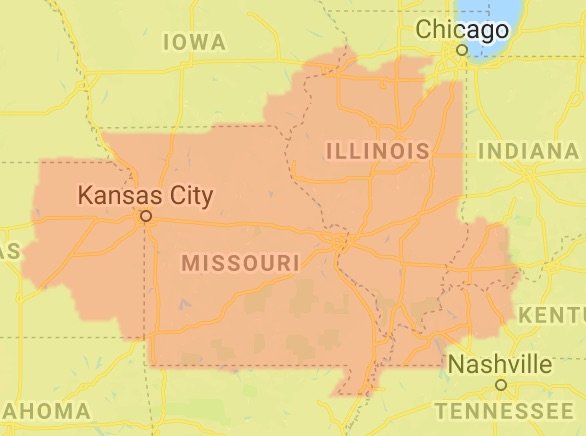 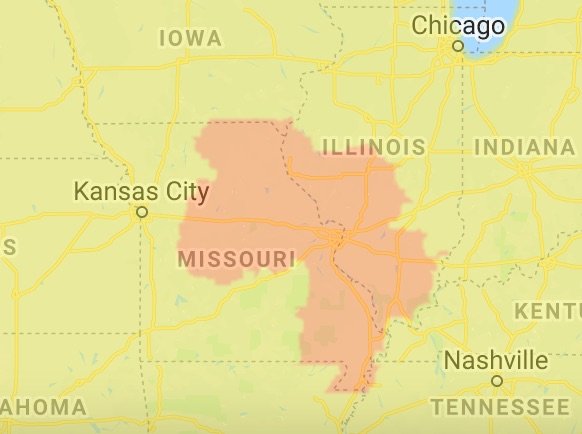 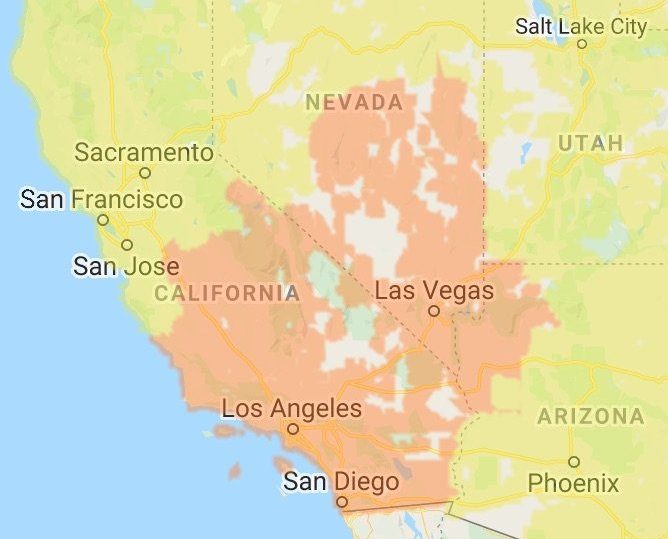 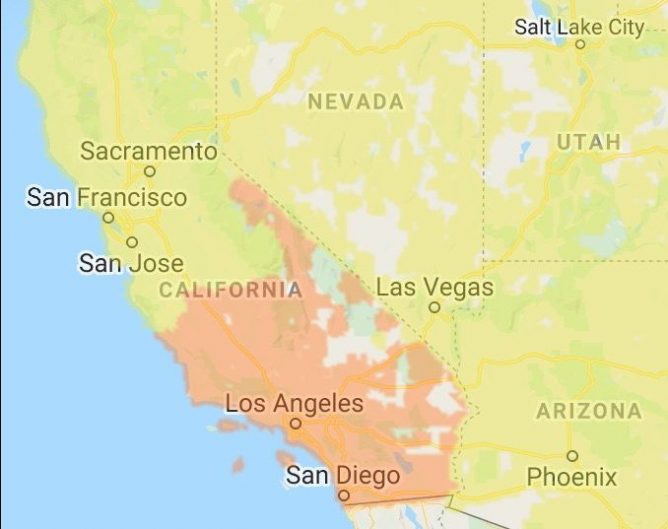 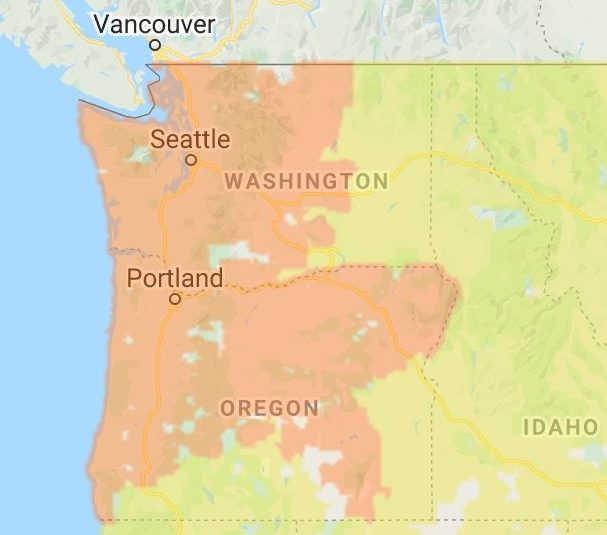 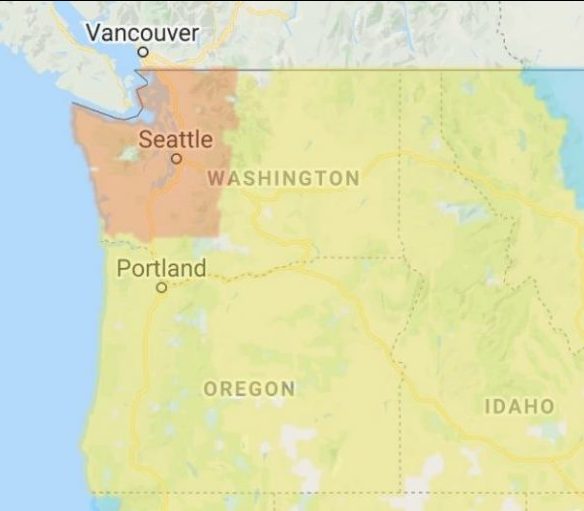 This contraction will occur in every SCF region. Overall, under current standards, 63,588 zip code pairs fall under the 2-day standard. Under the proposal, that would be reduced to 22,278 pairs. In other words, about two-thirds of the pairs now covered by a 2-day standard would be downgraded to 3-day. A significant portion of what’s generally thought of as “local” mail — mail that used to take one or two days to deliver — will take three days.

For most of the nation’s history, one of the main goals of the postal system was to find ways to deliver the mail as fast as possible. To that end, the country built post roads and a vast network of post offices. The Post Office played a key role in developing our rail and airline infrastructures. Mailers know the value of speed to the fraction of a cent, and every postal worker knows that the job is largely about speed. But now we’re being told that slower is better. You don’t need a map to see why that’s a problem.