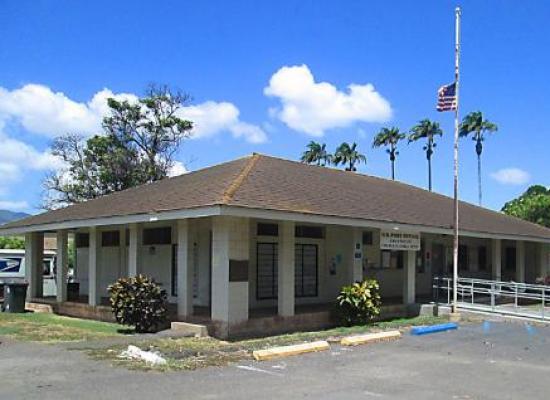 The Postal Service has announced plans to close the Ewa Station post office on Renton Road in Ewa Beach, West Oahu, Hawaii.  In its “proposal to close,” the Postal Service gives two reasons: There are alternate sites within a short radius, and “over the past several years, this office has experienced low or declining revenue and/or volume.”

It should come as little surprise that revenues at the Ewa Station have been declining.  Several years ago, the hours at the post office were reduced from eight a day to half a day, and then in 2011 they were reduced to just two hours a day, noon to 2 p.m., with no hours at all on Saturday.

Even operating just ten hours a week, the Ewa Station post office does pretty well.  From 2008 through 2012, revenues averaged about $96,000 a year.  The annual cost savings will be something like $48,000 or $60,000 — the proposal to close provides two contradictory numbers — which means that it costs about that much to run the office.  In other words, the Ewa Station makes a profit on the order of around $40,000 a year.

The Postal Service seems to think that the overall decline since 2008 is the result of the changing habits of customers, but there was also a recession going on during this period, and revenues in nearly every sector of the economy declined in a way similar to those at the Ewa Beach post office — and at nearly every other post office in the country.

There are other problems with the economic analysis in the proposal to close. It estimates labor cost savings for the next ten years at $607,164 and identifies no other costs or savings, yet somehow the total savings is $477,676.  The numbers don’t add up.

Either way, though, it doesn’t make sense for the Postal Service to say it will save anything in labor costs, considering that under “effect on employees,” the proposal to close says that the employees will simply be transferred to the parent facility and no one is losing a job.

The Ewa Beach Station is housed in a building owned by City, and the rent is just $4,404   a year.  The structure is in good shape, and there’s ample parking.  The proposal to close says that the post office building is "not listed as a historic landmark.”  It’s true that the building isn’t on the National Register of Historic Places, but it is a local landmark and many people like the old timey feel of the place, which is associated with the fact Ewa Planation goes back 150 years.  The post office structure It was built in 1958, making it eligible for the National Register, which uses fifty years old as a benchmark.

The Postal Service almost closed the Ewa Station post office in 2011, but instead, as a compromise with protesting customers, it reduced the hours to two a day.  The entire parking lot was resurfaced, and a new wheelchair ramp was added with a lower service window and lower box access for the disabled, so everyone got the impression that the Postal Service had dropped plans to close the office — until a few weeks ago, when residents learned that the discontinuance process had been resumed.

The Ewa Federal Credit Union is next door to the post office and one of its best customers, so it’s putting up a fight against the closure.  The Credit Union would be severely impacted, since it would need to send an employee seven miles round trip every day to the next nearest post office.

Average citizens are joining in the fight as well.  Customer Vera Kaaikaula has started a petition drive, and she has gotten more than 500 signatures.

State Rep. Rida Cabanilla also supports keeping the post office open.  "The building is part of the heritage of Ewa," said Cabanilla.  "If the post office is losing ground, it's because of poor service."

The area served by the Ewa Station post office is a rapidly growing community.  According to the U.S. census, between 2000 and 2010, the population grew by over 42 percent, from 44,000 to 63,000.  In fact, the last census placed the area as number one in growth in the state.

Customer Robert Midel points to the population growth as an important reason for keeping the office open.  "Every day this community is growing,” says Midel. “It's not going to end. It's going to be hard to get this post office back.  So we don't want it to go."

Seniors comprise a large portion of the Ewa Beach population.  Near the post office is a new apartment complex for seniors, with 150 apartments in phase one and a second phase in the works.  Seniors will have an especially difficult time if the Ewa Beach office closes.  If they don't drive, they will need to take a city bus to get to another post office.

According to Sperling’s Best Places, the economic situation of Ewa Beach is better than the national average — a lower unemployment rate, better job growth outlook, a higher household income, and so on.  Many new homes have been built, and many more are planned.

It looks like the kind of place where a post office would do well, especially if it were open more than two hours a day.  The Credit Union says people are always coming into their office trying to do some postal business.

As customer John Bond puts it, “Anyone who has spent time in this Ewa area knows that closing this great little post office makes no sense at all!”

As part of the discontinuance process, the Postal Service must hold a community meeting.  It is scheduled for today — Friday, September 20 — from noon to 2 p.m., a time when most people are at work and won’t be able to attend.

That’s not surprising. The Postal Service doesn’t really want to hear from customers.  It just wants to close the post office.  But there are a lot of people in Ewa Beach who want to keep it open, and they are going to make sure the Postal Service hears about it.

(Photo credit: Ewa Beach Post Office, John Bond.  And a thanks to Mr. Bond for his help on this article.)