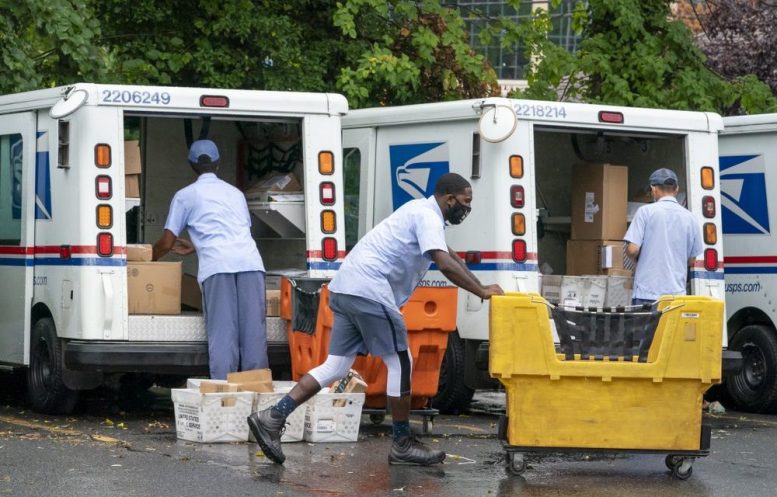 An interesting development in the Pennsylvania case: The U.S. House of Representatives has filed an amicus brief in support of the plaintiffs. The House argues that Congress created the Post Office “in part to provide critical infrastructure for connecting and informing the electorate,” and when Congress transformed the Post Office into the Postal Service in 1970, it also “placed substantive limits on the Postal Service’s authority to implement unilateral transformative changes by requiring the Postal Service to request ‘an advisory opinion’ from the Postal Regulatory Commission—also established by the PRA as an independent agency in the Executive Branch—on any changes ‘which will generally affect service on a nationwide or substantially nationwide basis.’” The House brief proceeds to review evidence of mail delays and the danger the delays pose to the integrity of the upcoming election.

Also in Pennsylvania, the plaintiffs have filed a letter concerning a dispute over the appearance of a witness because of a conflict with the hearing on Sept. 16 in the Jones case.

In the Jones case, attorneys for the plaintiffs have filed a letter confirming the list of witnesses who will testify in the hearing on Sept. 16. Among them is Mark Jamison, regular contributor and adviser to SavethePostOffice.com. (His affidavit is here.) The Jones plaintiffs have also filed a motion to compel that argues that the Postmaster General should be required to appear in the live hearing on Wednesday, even though the Postal Service et al “have made clear they are unwilling to have him testify.” The judge in the case, Victor Marrero, denied the motion to compel, so the PMG will not be testifying.

In the Richardson case, the Postal Service have filed a motion opposing expedited discovery, noting that there are at least six other cases seeking expedited discovery, two of which have been granted, as well as a live hearing this week in the Jones case. The motion then provides a helpful review of where things stand in some of the other cases. “Nevertheless,” says the motion, “despite the wealth of available, relevant evidence, and the slew of demands on USPS’s finite resources, Plaintiffs now seek additional expedited discovery.”

On Sept. 11, the Postal Service filed its memorandum in opposition to the plaintiff’s motion for a preliminary injunction in the NAACP case. Accompany the memo are hundreds of pages of testimony and exhibits to support the USPS case. Similar arguments and many of the same exhibits and testimonies were submitted previously in other cases, including Jones and New York.

The Postal Service argues that it has made substantial efforts to ensure the timely delivery of Election Mail and that it has engaged in a years-long mandate to improve efficiency and control expenses, which includes removing redundant sorting machines and collection boxes. Nothing out of the ordinary has taken place with regard to this mandate.

In the New York case, the plaintiffs have submitted a motion for expedited discovery. The plaintiffs have indicated that they want to take depositions of some of the USPS witnesses, including VP Angela Curtis, Robert Cintron, and Robert Justin Glass. The plaintiffs have also filed a request for documents, and a list of interrogatories they want to pose to these witnesses. The document request is extensive, including materials and communications related to decommissioning of sorting machines and collection boxes; extra trips and late trips; service performance; overtime; and daily mail condition. The interrogatories focus on what factors led to the removal of collection boxes and sorting machines; what “initiatives” the Postal Service has suspended; and what weeks service performance fell below 82% for First Class and 80% for Marketing Mail.

In the Vote Forward case, a motion for expedited discovery has been filed. The plaintiffs have filed their first request for documents. The list includes all documents provided to the plaintiffs in eight of the other cases; guidelines regarding transportation schedules, specifically late or extra trips, and communications about these guidelines; all communications and/or documents relating to any changes in metrics that track the timeliness and speed of delivery of mail, including but not limited to Service Scores from March 1, 2020 to the present; and much more.

For some reason, the plaintiffs withdrew their motion for a preliminary injunction in the Protect Democracy case.

In the State of Washington case the plaintiffs have filed a 74-page Motion for a Preliminary Injunction, along with 350 pages of testimony from 50 witnesses, including several postal workers, individuals impacted by mail delays, and the Secretaries of State of the states participating in the case. Ruth Goldway, former chair of the Postal Regulatory Commission, has also submitted testimony concerning the Postal Service’s apparent change in policy on how Election Mail is treated. (The Motion is here; a list of the witnesses is here; the witness testimony is here; the whole shebang is here.)

The Washington Motion argues that the “transformative” changes recently implemented by the Postal Service were done without going through the required advisory opinion process with the Postal Regulatory Commission, the “Leave Mail Behind” policy caused delivery delays, the Postal Service has decided to no longer treat election mail as first class, widespread delays are causing harm to residents who receive medications and other time-critical items, and voters face disenfranchisement caused by mail delays.

Senator Tom Carper, Richard Blumenthal and twelve Democratic colleagues filed amicus briefs in two lawsuits challenging recent operational changes implemented by the Postal Service that have resulted in unreliable service and widespread delays ahead of the 2020 election.  The briefs were filed on behalf of the NAACP suit and the suit brought by the New York Attorney General and six additional states and the District of Columbia. The brief argues that Congress has required the Postal Service to follow certain procedures when it seeks to change postal services in a way that affects service on a nationwide basis. Those procedures include requesting an advisory opinion from the Postal Regulatory Commission, which the Postal Service has not done. These changes are therefore a violation of federal law.

The plaintiffs in the Vote Forward suit have filed an amended complaint charging that DeJoy’s policies, including the no late/extra trip policy and his failure to restore decommissioned sorting machines, are negatively impacting mail delivery:

In this historic moment, Defendants should be redoubling their efforts to facilitate the right to vote and provide a clear articulation of their policies and the basis for them. Instead, DeJoy has ignored USPS’s statutory obligations, obfuscated the implementation and cessation of numerous policies, and unreasonably burdened the right to vote. His policies cannot stand.

There were also new developments in the Jones case. The Postal Service has filed a brief opposing the plaintiffs’ motion for a preliminary injunction to stop all changes to postal operations, along with testimony from eleven USPS employees. The brief is here. The Postal Service argues that it has a long-standing commitment to Election Mail and it is intensifying that commitment for the November election; that the cost-saving measures it has recently implemented are mostly routine, were planned long ago, and have nothing to do with interfering in the election; and that the plaintiffs are unlikely to succeed on the merits of their claim. A hearing in Jones has been scheduled for Wed., Sept. 16, via teleconference. The parties will be permitted to present witnesses.

One of the USPS employees who testified in theJones was Jason DeChambeau, Headquarters Director of Processing Operations. He revealed that the Postal Service has removed 711 letter and flat sorting machines in FY 2020. The Postal Service shared a list of 671 machines planned for removal with the APWU in June, but some of these have yet to be removed because the Postal Service put the plan on pause. Apparently some machines were removed before June, so they weren’t on the list but are reflected in the total of 711.

A new lawsuit was filed today against the Postal Service and PMG DeJoy by Steve Bullock, Governor of Montana. The Complaint is here. Like the complaints in the ten other cases, Bullock cites the Postal Reorganization Act, 39 U.S.C. § 101(e), which say that “in determining all policies for postal services, the Postal Service shall give the highest consideration to the requirement for the most expeditious collection, transportation, and delivery of important letter mail.” He also cites 39 U.S.C. § 3661(b), which state that if the Postal Service proposes changes that “will generally affect service on a nationwide or substantially nationwide basis,” the proposed changes must be considered by the Postal Regulatory Commission in an Advisory Opinion. Bullock states that the changes made by DeJoy “present an immediate and irreparable harm to the people of this State and to the ability of state government to perform its essential functions.”