The Gannett 2012 salary finder for USPS employees came out this week, and it contains a wealth of information.  You can find the salary, job title, workplace, and year of hire for any postal employee.   That includes all the executives in L’Enfant Plaza.

Unfortunately, the salary finder doesn’t contain information about bonuses and compensation packages, which for upper echelon executives can add up to almost as much as the base salary.  For example, according to the USPS Form 10-K for 2011 (p. 54), Chief Operating Officer Megan Brennan earned $225,308 in 2011, but brought in a total of 358,996, and Chief Information Officer Ellis Burgoyne earned $220,846 but brought in $508,688.

Even though the salary finder does not provide this kind of information about total compensation, it is still a useful tool and lots of fun.  For instance, here’s one use for the salary finder.

Back in November, the Federal Times  revealed that “as the U.S. Postal Service was careening toward a record $8.5 billion loss in 2010, it was paying more than three dozen top executives and officers salaries and bonuses exceeding that of Cabinet secretaries.”  A list was not available at that time, but using the salary finder, we’ve produced a list of the 38 postal executives earning the highest (base) salary as of February 2012.  You can see the list here. 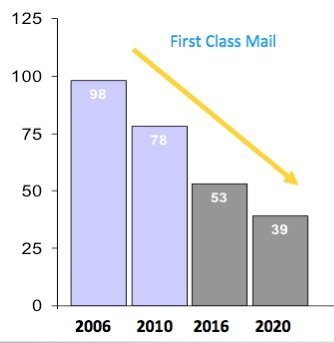 Searching the salary finder for zip code 20260, the zip for postal headquarters at L’Enfant Plaza, and then sorting by salary, we’ve learned that there are over one thousand employees in HQ who earn $100,000 a year or more.

We’ve also analyzed the data for the top 300 salaries in HQ, the 28 Vice Presidents (not all are in HQ), the 49 District Managers, and 57 plant managers.   (There are over a hundred job titles listed on the website, so we probably missed a few other high-paying jobs.)

There are 415 employees who fall into one of these categories.  You can see a list of their salaries here.  We’ve omitted names as a courtesy, but if you’re curious about anyone in particular, the salary finder can help.

The salary finder also provides the date of hire for postal employees, from which we’ve calculated years of service.  Most of these 415 executives and managers have put in a lot of time at the Postal Service, some as many as 44 years.  The median is 28 years, and the average is 24 years.

If you’d like to put some faces on some of the top earners, the USPS website provides an organizational chart — complete with photos — of Postal Leadership, the 37 folks running the show.

As for the significance of the information on the salary-finder website, make of it what you will.  Wages and salaries are relative — what looks like a huge salary to one person may look meager to another.  It just depends on where you’re sitting.

Wages around the world range from virtually nothing — Third-World peasants earn a dollar or two a day — to the millions of dollars earned annually by the super rich.  The bottom 90% of American households average $31,244 a year, while the top 0.1% average $3.2 million a year and the top 0.01% average $27 million a year.  (See this article in Mother Jones for more data on income inequality.)

Just to take an example, consider Fred Smith, CEO of the Postal Service’s biggest supplier, FedEx.  Smith earns $8 to $10 million a year — about $4,500 an hour (if he’s putting in a 40-hour week) — which puts him in the top 0.1% of the nation.  For the rest of us — the other 99.9% — that sounds like a pretty nice salary, but from the point of view of the billionaire Koch brothers, two of the richest people in the world, it’s probably not very impressive.  They’re worth $25 billion each, and between March 2010 and September 2011, they accumulated $15 billion in wealth.  (Some of that wealth goes to fund think tanks that publish books and articles advocating postal privatization.)

As for postal salaries overall, the average USPS employee — this includes the entire workforce, from non-career casuals to the Postmaster General — earns $57,000 a year, not counting benefits.  The following numbers come from the Form 10-K for FY 2011, and the averages use 645,950 as the total workforce, as indicated in the 10-K.

From the point of view of a Wal-Mart employee earning $10 an hour, the salaries of postal workers must look quite enviable.   Lots of people think postal workers make too much, and there are many stakeholders in the mail industry who argue that high wages and generous benefits are driving up costs and making rates too high.

Postal management seems to think the same way.  It’s been saying that it needs to get rid of the no-layoff clause in union contracts, replace full-time employees with contract workers, and take control of the pension plans and retiree health care plan so that wages and benefits can be brought down to meet the “private sector comparability standard.”

That’s a reference to a passage Title 39, the 1971 Postal Reorganization Act (PRA), which says, “As an employer, the Postal Service shall achieve and maintain compensation for its officers and employees comparable to the rates and types of compensation paid in the private sector of the economy of the United States.”

If postal executives had their way, then, the salaries and benefits of regular postal workers would be decreased while their own compensation packages would be increased — all to bring postal salaries into compliance with Title 39 and the “private sector comparability standard.”

Needless to say, postal management would probably prefer if the public did not know very much about their compensation packages, and they’ve fought the APWU’s effort to find out more about performance bonuses.  But as the salary finder FAQ page explains, government workers aren’t entitled to the same kind of privacy as workers in the private sector:

“Open record laws and court decisions for at least the last 40 years have maintained that a government employee’s name, salary and job-related information is open to anyone who requests it.  Courts and government rules have long held that federal employees are public servants, and that the public has a ‘significant interest’ in knowing how their employees are paid.”

With the fiscal situation of the Postal Service a matter of intense public debate right now, there’s obviously “significant interest” in how postal workers and executives are paid.  Last week, revelations about the postal salaries of executives, coupled with news about impending plant closings, prompted New York Congresswoman Kathy Hochul to introduce legislation limiting compensation for postal executives to the same level of pay as the President’s Cabinet.  Huchel is concerned about the 700 jobs that will be lost in Buffalo when its mail processing plant closes.

“The Postal Service cannot make the argument that they need to cuts costs and let go hard-working postal workers when their own management team continues to rake in bonuses and make more than the President’s Cabinet,” said Hochul.  “The jobs of over 700 Western New Yorkers and thousands of Americans across this country are worth more than bonuses for a handful of individuals at the United States Postal Service.”

In response to Hochul’s proposal, postal officials are using the argument they make in the Form 10-K.  They say that because the Postal Service functions like a business, it is important for executive salaries to remain competitive with the private sector.

USPS spokesman Mark Saunders put it this way: “When you compare the size and scope of an organization that employs well over half a million employees operating among 32,000 locations linked by more than 210,000 vehicles, our officer compensation is well below that of similar private sector positions.”

Maybe so, but there are a lot of people wondering how postal officers and managers can pay themselves so well and at the same time say that the financial crisis is so bad that they need to eliminate 155,000 jobs and close half of those “32,000 locations” (a.k.a. “post offices”).  It’s something to wonder about.