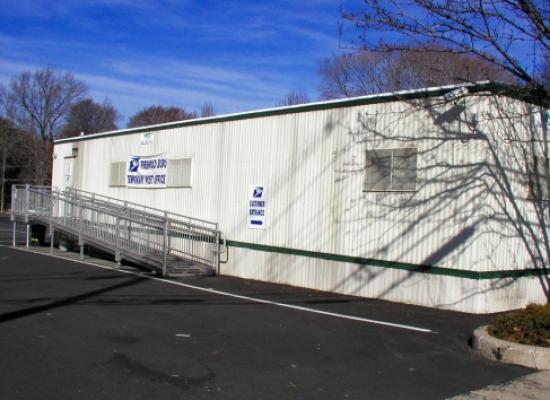 Freehold, New Jersey, has had a post office since 1795, and it once had a New Deal post office.  Built in 1934 by the WPA, it boasted a historic mural of Revolutionary War hero Molly Pitcher, painted in 1936 by Gerald Foster of Westfield.  The mural now hangs in  the  Monmouth County  Library, and the post office building now houses the Sheriff’s office and the Department of Consumer Affairs.

In 1991, a new, larger post office was built a few miles away, and downtown Freehold came to be served by a satellite post office, first located in a pharmacy, then an office supply store, and, since 2002, by a trailer in a parking on Lafayette Street.  Humble though it may be, the “temporary” trailer post office has been a welcome presence in the community.  Back in 2009, when  the USPS announced it would be closing this post office, citizens and government officials united in protest, and the post office was “taken off the chopping block.”

“Freehold Borough is a very pedestrian town,”  Mayor Michael Wilson said at the time. “People park their cars and walk around to run their errands. . . If people had had to travel to Freehold Township for their postal needs, it would mean more cars on the road, more traffic and fewer people taking advantage of our town’s wonderful business district.”

Freehold Director Barbara McMorrow added, “Monmouth County has an obligation to fight for our residents, and, in this case, we have done just that and won.  Access to a U.S. Post Office is something we promise our citizens, and if that post office can be reached without need of a car, which would only add to the traffic and pollution in our area, than the win is even sweeter. I thank the Postal Service officials who made the right judgment.”

This week the USPS announced it would be closing the "temporary" Freehold post office in July. “This is an abomination,” said Councilwoman Sharon Shutzer, an outspoken opponent of the plan. “This is the result of some empty suit sitting in Washington, D.C., looking at a map and seeing that there are two post offices in one ZIP code.”

Freehold is the birthplace of Bruce Springsteen, who wrote a song about growing up “In Freehold."  The song ends:

“Don't get me wrong, I ain't puttin' anybody down
In the end it all just goes and comes around
In my hometown back in Freehold.”