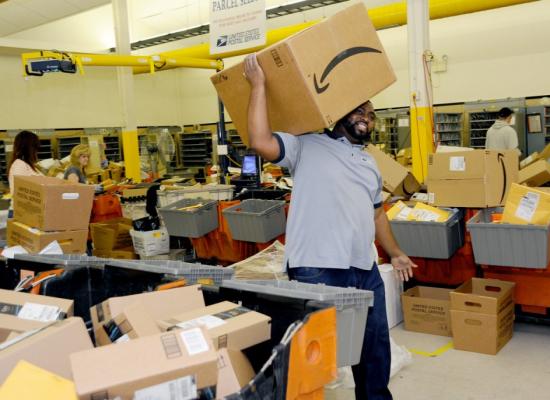 Yesterday the Postal Service posted its Form 10-Q financial report for the first quarter of Fiscal Year 2016 (Oct. 1, 2015 – Dec. 31, 2015).  Thanks to a brisk package business during the holiday season, the Postal Service had plenty of good news to report.

The financial report shows that the growth in e-commerce is more than making up for the losses in First Class Mail associated with the migration to electronic communication.  As APWU President Mark Dimondstein said in November on the occasion of another USPS financial report, “I often say that the Internet taketh and the Internet giveth. First-class mail has declined, but online shopping has triggered an explosion in package volume.”

That explosion, as Bernie Sanders would say, has been “yuge.”  Apparently the widespread reports of the demise of the Postal Service have been greatly exaggerated.

A swing to profit

As highlighted in the USPS press release, compared to the same period last year, operating revenue grew 3.3 percent to $19.3 billion.

“Controllable income” totaled $1.3 billion.  That’s how much profit the Postal Service made during the quarter before deducting $1.45 billion owed to the Retiree Health Benefit Fund and adding $196 million from a favorable workers’ comp adjustment.  After taking these two factors into consideration, the net profit was still $307 million, as compared to a $754 million loss for the same quarter last year.

As the press release also emphasizes, however, the Postal Service continues to benefit from the exigent surcharge, which expires in April, and “legislative reform and careful focus on cost containment remain necessary.”

Not surprisingly, the media reports are focusing on the fact that the Postal Service has finally posted a net profit.  As the Wall Street Journal quickly reported, “The U.S. Postal Service swung to a profit for the holiday quarter, helped by strong demand for package delivery, a big surcharge and continued favorable interest-rate changes on workers’ compensation.”

Lest anyone looking at the latest financial numbers think the news is too good, though, the USPS press release also contains this comment from Chief Financial Officer Joseph Corbett: “While net income is favorable compared to a net loss, it unfortunately does not reflect the end of our losses.”

Corbett goes on to explain that without the workers comp adjustment and the exigent surcharge, the Postal Service “would have actually reported a net loss of approximately $700 million.”

In the 10-Q report itself, the Postal Service puts a damper on the good news in yet another way (bold added):

This passage is apparently intended to make it seem that the growth in Shipping and Packages is insufficient to make up for the declines in First Class Mail.  The Postmaster General made the same claim in testimony before Congress back in January.  In neither instance, however, did the Postal Service explain how it came up with the figure 260 percent, and it’s hard to imagine where the number came from.  Is that a real calculation or just hyperbole?

Neither of these scenarios explains the 260 percent figure, and it remains a mystery how anything would need to increase that much to make up for losses in First Class Mail in 2015.

In any case, the key question is simply this: Are increased revenues from Shipping & Packages making up for declining revenues in First Class Mail?  The answer is an unequivocal yes.

The increase in shipping revenues was thus over nine times the decrease in First Class revenues.

Looking only at these revenues, however, may be a little misleading.  As the Postal Service points out in the passage quoted above, the costs for processing and delivering packages are higher than for First Class Mail. In fact, as the Postal Service often emphasizes in press releases and financial reports, it takes about $3 of additional package revenue to make up for every $1 of lost First-Class revenue.  Here’s where that ratio comes from.

This table from the PRC’s FY 2014 financial analysis shows the “cost coverage” for each type of mail.  Cost coverage is calculated by dividing the total revenues for the class by the attributable costs for that class.  For First Class Mail, the cost coverage is 220 percent, while for Shipping and Packages it’s about 140 percent.

The attributable costs are deducted from the total revenues for the class, and the remainder is the “contribution” toward institutional costs. In a sense, the first 100 percent of revenues go toward the attributable costs, so the contribution is sometimes seen as “profit.”  So for First Class Mail, there’s a 120 percent profit (or contribution), and for packages it’s 40 percent.  First Class Mail is thus three times more “profitable” than packages, so it takes $3 in package revenues to make up for $1 lost in First Class revenues.

The increase in package revenues thus more than made up for the losses in First Class Mail.  This increase was also big enough to cover the losses in Standard Mail ($62 million), International mail ($23 million), and Periodicals ($5 million) as well — with $414 million to spare.

The main problem facing the Postal Service right now is the fact that the exigent surcharge of 4.3 percent on Market Dominant products will end sometime in April.  Without the surcharge, revenues will decline by about $1 billion during the second half of the fiscal year and $2 billion next year.

The Postal Service is trying to extend the surcharge by going back to court with the PRC and lobbying Congress, but if these efforts fail, it probably won’t be a total disaster.  Shipping and Packages are Competitive products and won’t be affected.  In fact, the price of many of these products just went up in January.  Priority Mail packages, for example, went up an average of 9.8 percent.

If package revenues continue to grow at a pace of anything like 11 to 13 percent, they should make up for a large portion of the lost surcharge.  Time will tell, but in the meantime the first quarter’s financial results are cause for celebration.