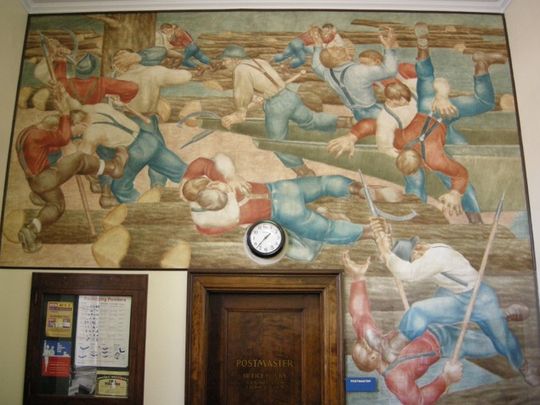 Journal Sentinel: On vacation about four and a half hours north of Milwaukee, Susan Kwas needed to send a letter.

As she waited her turn at the counter at the post office in Park Falls, she noticed a painting. The mural above the door to the postmaster’s office depicted a legendary Northwoods fight between two rival logging crews — in red and white shirts — on the banks of the Flambeau in 1888. At the foot of the painting, a lumberjack in a white shirt stomps on the face of a lumberjack in a red shirt while impaling him with a spear.

“It’s just a big brawl,” Kwas said. “The drama of it is really fantastic.  She went online to discover dozens of these murals exist around Wisconsin.

As part of President Franklin Delano Roosevelt’s New Deal, the Section of Fine Arts commissioned murals to decorate new post offices. The main focus of the Section of Fine Arts was to decorate public buildings with quality public art. Post offices built in the 1930s and ’40s set aside 1% of their budget for “embellishment.” In all, more than 30 murals were painted in Wisconsin.

The man who painted “Lumberjack Fight on the Flambeau River,” James Watrous, also painted the Paul Bunyan mural in the University of Wisconsin Memorial Student Union in Madison.  Read more.