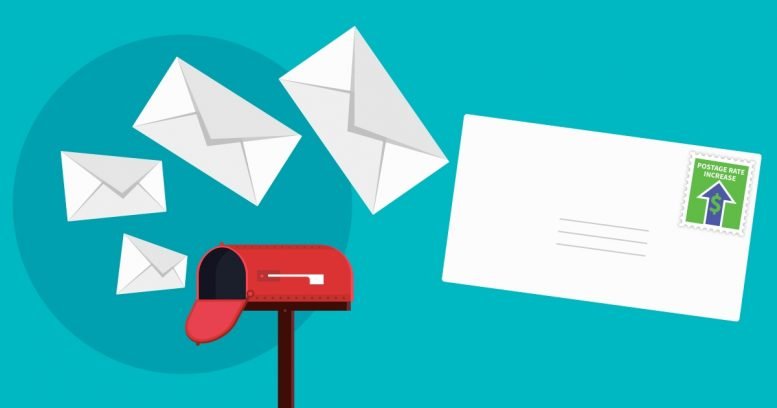 On November 30, 2020, the Postal Regulatory Commission issued a 484-page order revising the rate system for Market Dominant products. Under the new system, the Postal Service will be able to raise rates beyond the Consumer Price Index, which it was prevented from doing (aside from the provision for an exigent increase) by the Postal Accountability and Enhancement Act of 2006. (See this previous post for more about the order.)

The new rate authorities will take some time to go into effect in a price hike, almost certainly not before summer 2021. And it’s very possible that the Postal Service will not take full advantage of its new authority and instead bank some portion for future use.

The rate authority numbers presented last week are considerably greater than what the Commission had envisioned over the past couple of years as it was developing the formulas for future above-CPI increases. This table from the order shows what the density-based increases would have been in previous years based on the new formula. The average authority for this period would have been about 1.23 percent annually; the highest was the 2013 number, 2.69 percent.

The following table shows the hypothetical calculations for the first two years of the new system.  These estimates were presented in a PRC order in December 2019, and the numbers correspond roughly to the situation in 2018-2019, when total mail volume fell from 146.4 billion to 142.6 billion.

The calculations produce a density rate authority based on Market Dominant volume and a second based on total mail volume. The system uses the lower of these two calculations, so for hypothetical year 1, the rate authority would be 1.46 percent and for year two, 1.11 percent.

Together the two hypothetical illustrations suggest that the anticipated rate authority for 2020 would have been something on the order of 1.3 percent. But then the pandemic happened. 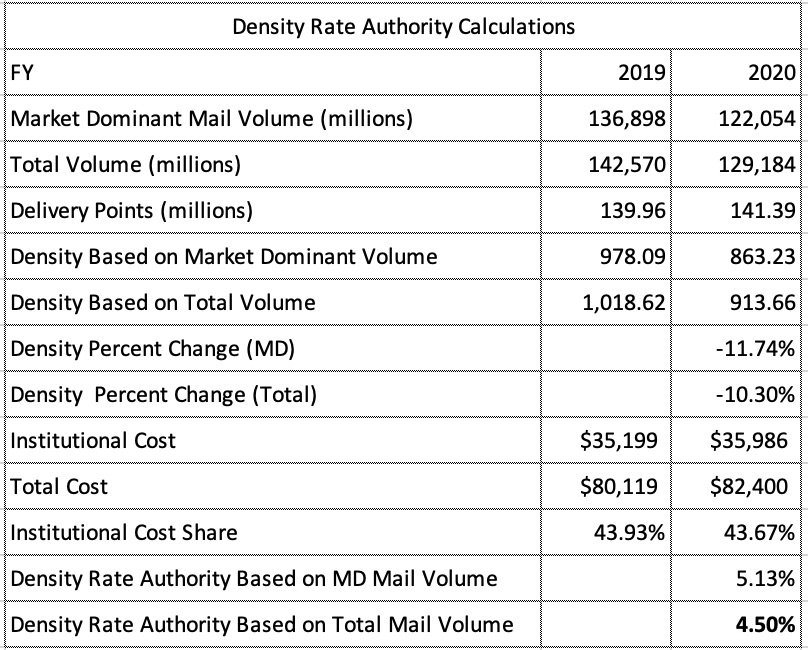 According to these calculations, the density rate authority for 2020 is 4.5 percent. That is about three and half times what the hypothetical examples would have predicted.

The PRC’s formula, it should be noted, also incorporates the institutional cost shares of Market Dominant and Competitive products. As the PRC’s order (p. 74) explains, “[The formula] permits Market Dominant mailers to benefit from reduced density-based rate authority when Competitive products experience more favorable changes in volume than Market Dominant products.” But even with the unprecedented growth of parcel volumes due to the pandemic, this factor did not have much effect on the density rate authority. The most significant factor is the drop in mail volume.

Here’s a chart showing total mail volumes over the past several years. It shows why 202’s drop in volume was so unusual.

The recession caused one unusually large annual drop of 12.8 percent in 2009, but since then total mail volume has fallen fairly consistently, about 2.1 percent a year — until 2020.

The second rate increase authority is based on Congressionally-required amortization payments for retirement health benefit and pension costs. Unlike the density rate authority, this retirement authority cannot be banked. It also could become irrelevant if Congress were to pass legislation that modified how the Postal Service deals with these costs.

Here’s a table showing what the retirement-based authority was projected to be in the PRC’s order.

The actual calculation for 2020 came out to be 1.06 percent, slightly more than the 0.86 percent that had been projected but within the same ballpark.

The new system also grants the Postal Service an additional 2 percent of rate authority for products considered “non-compensatory,” i.e., the revenue they bring in doesn’t cover their attributable costs. The two products for which this applied in 2020 were Periodicals and Package Services (Alaska Bypass, Media and Library Mail, Bound Printed Flats, etc.).

In its Rate Authority Notice, the Postal Service declares its intention to use the new authority, but it is not required to use it or lose it. It can instead bank the unused authority for the next year, and under current law, the banking can extend for five years.

In other words, the Board of Governors may decide that using the full authority might not be advisable. It could, for example, cause rate shock and hurt business, so the Postal Service could use part of the new authority and save some for later.

For these rate authorities to take effect in actual price increases, the Postal Service will not need to wait until the next regular price adjustment, which would delay the above-CPI increases until January 2022. The Commission’s order on the new system states that “the Postal Service retains the flexibility to propose an out-of-sequence price adjustment at any time. The rate authority provided by the final rules is available for the Postal Service to use shortly after the effective date of the rules, and following the Commission’s determination.”

The timing could go something like this. The Commission first needs to validate the Postal Service’s proposed calculations, which are based on numbers in the Annual Compliance Determination, so any additional rate authority would be available to the Postal Service in late March 2021, when the ACD is issued. The Board of Governors would then need to decide, based on this authority and any other factors it wants to consider, what the new prices will be. The Commission then needs to conduct further proceedings reviewing and approving the new rates.

Once approved, the Postal Service must then provide 90 days’ notice before implementing the prices, which would take us to sometime in July or later. (The order on the new rate system extended the minimum notice period between the date the Postal Service files a notice of proposed rate adjustment and the date the proposed rates could go into effect from 45 days to 90 days.)

The process could be affected by other circumstances. Several of the mailers’ associations have filed two appeals with the D.C. Circuit (they’ll probably be consolidated at some point, but the docket info can be found here and here). These mailers have also filed a motion for a stay with the PRC, requesting that “the Commission stay the effective date of the Orders and related regulations until the petitions for review are resolved by the Court of Appeals.”

The appeals process could take several months, even a year or more. Since 2009, the Postal Service has appealed a PRC order twenty times, and the average duration between the initial filing and the court’s ruling has been 341 days. Several appeals were handled much more expeditiously, but these usually involved relatively simple issues, like unsealing non-public material. The big cases involving rate changes often took more than a year.

That in fact is one of the points the Postal Service makes in the opposition to the motion for a stay that it filed today with the PRC. “There is no guarantee as to how long the court may take to resolve cases filed by multiple parties on an administrative record spanning four years and thousands of pages,” writes the Postal Service. And in a footnote, the Postal Service points out that “in January 2014, the Postal Service and various of the Mailers filed crosspetitions for review of the Commission’s December 2013 order in the so-called exigent case. The court did not issue its decision until seventeen months later.”

Unless the Commission grants the mailers’ motion for a stay, some sort of above-CPI increase could take place mid-2021. And even if the appeal eventually succeeds in getting some sort of order overturning the changes in the rate system or remanding the case back to the PRC, there are no refunds when it comes to postal rates.