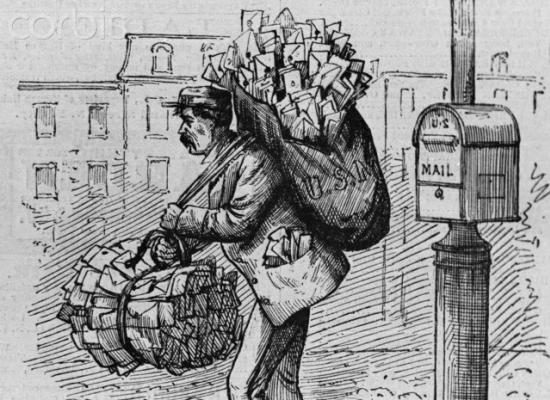 The Postal Regulatory Commission is currently reviewing a request from the Postal Service to change delivery service standards for a large portion of Standard mail.  The plan is to “load level” the heavy volume of mail that is normally delivered on Monday by delivering some of it on Tuesday.  The plan has been presented as a way to "ease the burden" on processing and delivery operations, but documents released this week to the PRC indicate that the plan may have another purpose — preparing the way for ending Saturday delivery.

The Postal Service says load leveling will have several benefits.  First of all, it will “ease the burden currently placed on the network by the convergence of current mail entry patterns and applicable service standards.”  More specifically, it will reduce mail processing work hours, cut down on carrier overtime hours, allow for earlier completion of carrier routes, and result in earlier return of mail collected on carrier routes.  It will also mean “earlier delivery for customers” (earlier in the day, that is, albeit a day later in some cases) as well as earlier cancelation and processing of collection mail picked up by carriers along their routes.

One of the biggest benefits of the plan isn’t mentioned in the Request for an advisory opinion, and it hasn’t come up in any interrogatories yet either.  But it could be the main reason why the Postal Service wants to make this change in service standards: It will make it easier to end Saturday delivery.

That idea actually came up during the PRC’s advisory opinion on five-day delivery in 2010-2011.  One of the Commission's main concerns about ending Saturday delivery was that it would create a “peak load problem” — not delivering mail on Saturday would cause a pile up on Monday.  This graphic from the advisory opinion shows just what that might look like in terms of Monday mail volumes.

As a result of this peak load problem, ending Saturday delivery would mean that carriers would spend more time in the office preparing the mail on Monday morning and more time on the street delivering it.  The Postal Service might find it necessary to shorten carrier routes and add more carriers.  That would increase operating costs and eat up much of the hoped-for savings of eliminating a day of delivery.

In response to the Commission's concerns, the Postal Service said that it would not need to add routes.  It said that “peak Monday volumes under five-day delivery could be handled entirely through short-run techniques, such as increased use of overtime, part-time employees, and deferral of Standard Mail for delivery on other days” (italics added).

The plan to slow down Standard Mail was thus being envisioned all the way back in 2010 as part of the proposal to shift to five-day delivery.

This explains some of the slides that the Postal Service included in presentations given to Work Group 157 of the Mailers Technical Advisory Council (MTAC).  Over the past year, this committee, which consisted of mailing industry representatives and postal managers, met several times to discuss strategies for workload leveling, which was eventually tested in South Jersey.

As part of the PRC advisory opinion process now underway, the Public Representative asked the Postal Service to share the presentations, minutes, and other materials from these meetings.  There were no minutes, but the Postal Service did share the PowerPoint presentations.  (There's also an interesting memo from a mailer expressing concern about the effects of load leveling, especially when coupled with ending Saturday delivery.)  You can download the presentations from the PRC website here, but they are much easier to look at on Google Docs here.

Below are a few of the slides from these presentations.  The first slides how mail volumes are distributed over the days of the week under current circumstances as compared to how volumes would be distributed in a five-day delivery scenario.  Then there's a presentation about the load leveling plan from January 10, 2014.  (Click on Google Drive in the bottom right of this slideshow to go to a larger version.)

The slides show that ending Saturday delivery would cause volumes on Monday to increase significantly for all types of mail, just as the PRC had envisioned when it evaluated the five-day delivery proposal in 2010-2011.  As the slide for First Class Mail shows, Monday volumes would increase by over 50 percent.  Other types of mail would also see significant Monday increases.

One way of dealing with that problem, then, is by delaying delivery of some Standard Mail from Monday to Tuesday, which is what the load-leveling plan is all about.  The fact that Work Group 157 was discussing load leveling in the context of five-day delivery suggests that the two plans are connected.

Given what these slides show, it is very likely that ending Saturday delivery would be almost impossible without delaying Standard Mail under the load-leveling scenario.  Here are a couple more graphs to show just how bad the problem is already.  The first shows that forty percent of carriers are out on the street after 6 p.m. on Mondays, much more than on any other day of the week.  The second shows how overtime costs are highest on Mondays and Fridays.

The connection between load leveling and five-day delivery also comes up in a FAQ page prepared by the Postal Service for commercial mailers.  It says the following: "The Load Leveling initiative is separate from the five-day initiative.  Hypothetically, if the Postal Service were to go to a five-day mail, six-day parcel environment, and volume of mail delivered today on a Saturday simply shifted to Monday, the imbalance across the days of the week would be exacerbated in that environment without Load Leveling."

That makes it pretty clear: There is already too much stress on the system — and on the backs of letter carriers — occurring on Mondays.  Were the Postal Service to end Saturday delivery, the problems would get worse.  Load leveling will ease the burden on Mondays and thereby make it possible to absorb the peak loads that will occur with eliminating Saturday delivery.  In the end, carriers will probably be out just as late on Mondays, but instead of delivering the Standard Mail dropped off on Friday, they'll be delivering the peak load that develops because there's no Saturday delivery.

The request for a change in service standards on Standard Mail may not be all about getting carriers back in the office earlier.  It's probably about preparing the way for five-day delivery.