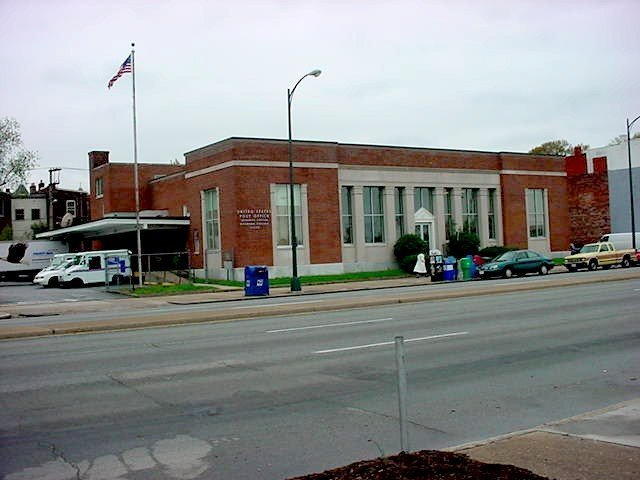 Back in October 2015, the Postal Service sold the historic 1937 Saunders Station post office in Richmond, Virginia.  At the time, the sale price was not made public, but as discussed in this previous post, there was reason to wonder if the sale made sense financially.  Turns out, the sale makes hardly any sense at all.

A reader of STPO pointed us to the City of Richmond’s assessor’s office, which posts the sale prices for all real estate transactions.  According to the Assessor’s transfer record, on October 27, 2015, the Postal Service sold the Saunders Station to Torq Holdings (the LLC for a startup software company named Mobelux) for $812,000.

That amount is troubling for a couple of reasons.

(An article about the sale last October in Richmond BizSense said the property had been recently assessed even higher, at $1.45 million, but it’s not clear where that number came from.)

Now, it’s possible that the assessed value of $1.2 million was simply off.  Assessments are typically based on comparable properties and the price when the building last changed hands, but old post office buildings are rather unique, and the building hadn’t changed hands since it was built decades ago.

(Disposing of properties below their market value is the subject of a scathing report by reporter Peter Byrne, Going Postal: U.S. Senator Dianne Feinstein’s husband sells post offices to his friends, cheap, which argues that CBRE, the Postal Service’s real estate agent, is helping out its friends and clients with deals on postal property.  The USPS Office of Inspector General has also done several audits criticizig the USPS-CBRE contract.  There’s no indication in this case, however, that the buyer of the Saunder’s Station has connections with CBRE.)

In addition to the probability that the post office was sold significantly below its real value, there’s this bit of arithmetic to consider about the sale.

Back in 2011, when the Postal Service originally expected to sell the historic Saunders Station, it began renting space for the new location just a few doors away.  (The historic post office is at 1625-35 W. Broad Street; the new Saunders station is at 1643 W. Broad Street.)

According to the USPS Leased Facilities Report, the new space has about 3,500 square feet, with no land (and no parking except for spaces on the street), and the Postal Service is responsible for the maintenance.  The annual rental price is $55,000.

The lease began on September 1, 2011, just about the time the property was first listed on the USPS-CBRE Properties for Sale website.  According to BizSense, the relocation finally took place in early October 2015.  (The USPS Find Locations page still lists the New Saunders with no hours.)

Over the four years from September 2011 to October 2015, the Postal Service spent about $220,000 on the new space while it continued to operate out of the old space.

The lease runs for ten years, until 2021.  Over the six years remaining on the lease, the Postal Service will pay out an additional $330,000 in rental costs.

While the USPS Facilities Reports usually indicate lease renewal options and the new lease price, the report for the New Saunders Station does not indicate a lease cost after the ten-year lease ends.  If the Postal Service remains in the space, it will probably end up paying more than $55,000 a year.  Let’s say the rent goes up to $60,000 a year.  The following four years would cost about $240,000.

The sale price was $812,000, but the Postal Service had to pay its real estate broker, CB Richard Ellis, a commission for conducting the transaction.  The typical fee is 3 to 6 percent, so let’s say in this case it was just 4 percent, which comes to about $32,000.  The Postal Service also had to renovate the new space.  It’s just a small retail outlet, so let’s say the renovations cost another $30,000.

By selling the building and relocating down the street, the Postal Service probably netted about $750,000.

By 2025, then, the Postal Service will have paid out more in lease costs than it brought in from the sale.

By 2035, twenty years after the relocation, the Postal Service will have spent about $1.4 million on lease costs — almost twice what it netted from the sale.

It gets worse.  If the Postal Service had remained in the historic building, its value would have appreciated considerably.  Figuring a typical annual appreciation rate for commercial real estate of 3 percent, in the year 2035 the property will be worth nearly $1.5 million.

Plus, during this entire time, the Postal Service will be operating out of a small, nondescript storefront with no parking, instead of a historic New Deal building with plenty of space and parking and character.

The sale of the Saunders Station may have made sense in the short run, but over the long term, it doesn’t make any sense at all.