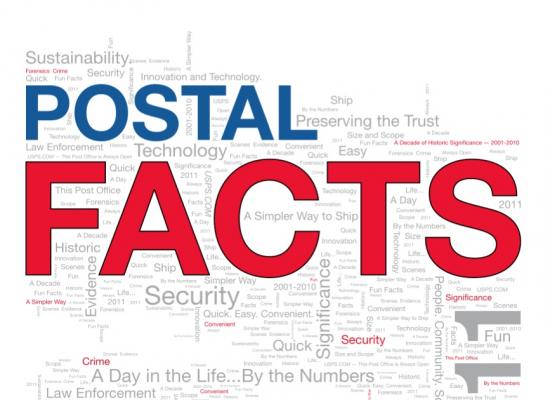 There’s a new GAO report out this week by the indefatigable Phillip Herr.  It’s called “Action Needed to Maximize Cost-Saving Potential of Alternatives to Post Offices.”  In this week’s Federal Eye column for the Washington Post, Ed O’Keefe writes about the report and poses the question, “How bad is it at the post office? Here are the numbers.”

Citing Herr’s report, O’Keefe writes: “There were 59 million fewer visits to post offices in 2010 than in 2009, and visits are down 21 percent over the last decade, according to a new Government Accountability Office report. (Ironically — despite searching high and low for a number — the report doesn’t actually say how many visits were recorded in 2010.)”

The reason O’Keefe couldn’t find the number of post office visits in the GAO report is that Herr doesn’t say how many there were, and despite being heavily footnoted, the report doesn’t say where the number 59 million came from.

So, how many people do visit the post office every year?

O’Keefe is a busy fellow, so apparently he didn’t have time to Google around for an answer to his question.  The “Postal Facts” page of the USPS website provides a table with all sorts of data, including annual visits to the post office.  (Click on the chart for a larger view, and click on the chart to come back.)

The number of people visiting post offices has become one of the issues being examined in hearings before the Postal Regulatory Commission, now working on an Advisory Opinion on the Retail Access Optimization Initiative (RAOI).  After all, if you’re going to close 3,650 post offices — and plan to close a total of 15,000 — it only makes sense to consider how many people use the post office.

In fact, one of the justifications for closing thousands of post offices is that people are visiting the post office much less frequently than they used to.  According to the Postal Service, the brick-and-mortar post office is essentially a thing of the past.

In his opening testimony before the PRC on the RAOI, James Boldt, the man running the show, said this: “Customer behavior is also changing.  With advances in technology and other product innovations, customers are choosing alternatives to traditional brick-and-mortar retail facilities when possible and instead are attracted to other channels developed by the Postal Service.”

To illustrate his point, Boldt provided the following chart: 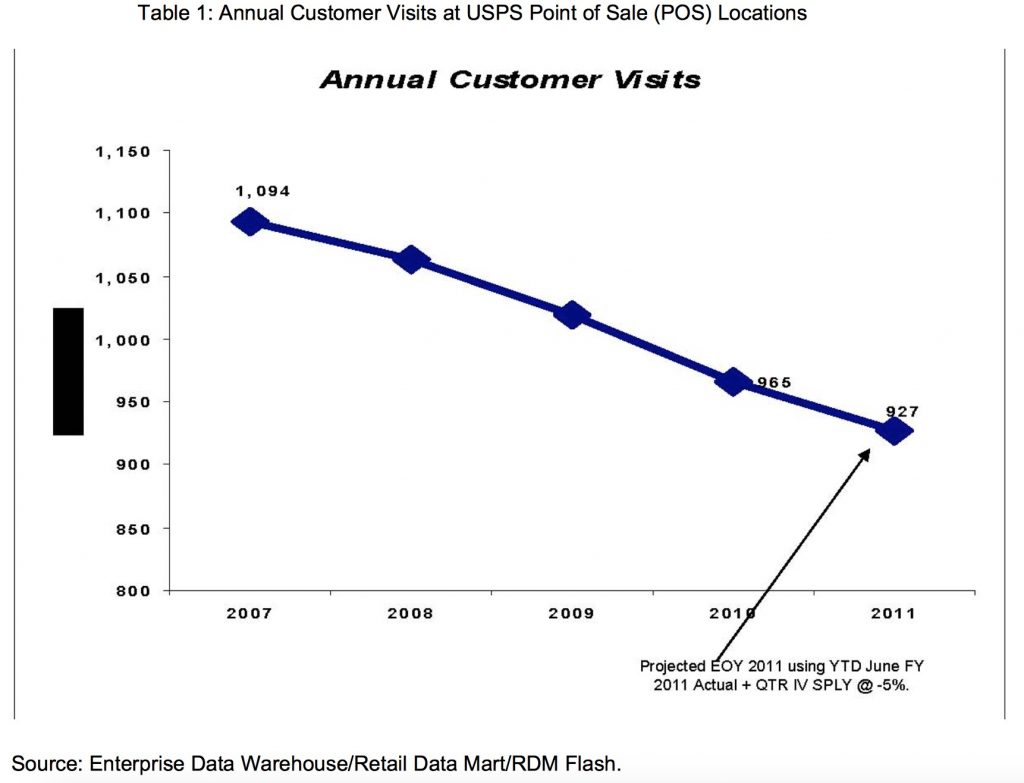 It wasn’t clear from the chart how these annual visits were being counted, so the National Association of Postmasters (NAPUS) put several interrogatories to Boldt about it.  It turns out that only about 15,500 post offices have a Point of Sale (POS) terminal to count window transactions, so the chart doesn’t show the picture for all 32,000 post offices.  Plus, the POS terminal doesn’t count many kinds of visits to the post office, like when you go check your p.o. box or pick up a flat-rate box (PRC hearing transcript, Sept. 8, 2011, p. 339).

Actually, it’s not even clear what Boldt’s chart is showing to begin with.  It’s supposedly showing annual visits to a POS location, but it can’t mean that a thousand people a year visit each location.  If you multiply the 15,500 POS locations times the 965 annual visits in 2010, you get about 15 million visits.  Since only half the country’s post offices have a POS terminal, let’s double that number for the whole country, which gives us about 30 million visits.  But that’s a tiny fraction of the estimated 1.07 billion visits in 2010 shown on the Postal Facts page.  So what exactly is Boldt’s chart showing if not annual visits?  And why is the label on the vertical axis blacked out?

Unlike Boldt’s chart, the briefing chart has the vertical axis labeled, with “pieces (m).”  Perhaps this refers to the number of pieces of mail that were handled in retail transactions at each of the post offices with a POS terminal, measured in thousands (m).  That would mean, then, that Boldt’s chart did not really show the number of customer visits at all.  It was showing the number of pieces handled in these visits — about 15 billion pieces at 15,500 locations.  That number is at least in the ballpark, considering that the annual volume of mail is about 170 billion, much of it entering the system not at post offices but at Bulk Mail Entry Units.

While all this may explain Boldt’s chart, we’re back to the question: Where did the Postal Service’s “Postal Facts” come up with its numbers purporting to show a drop in visits, a “fact” now being repeated by the GAO to Congress, the Washington Post, and numerous other news agencies?

Perhaps the numbers were derived from another source, the survey of US households the USPS conducts each year.  This “Household Diary Survey” (HDS) questions some 8,500 families over the telephone or Internet about their postal habits.  The 2010 report shows the following chart:

The chart shows that the percentage of households visiting the post office every month is substantial — 83% in 2010.  The survey doesn’t tell us the total number of visits per year, but we can develop an estimate.  If we take the lowest number in each range (1, 3, 7), we find that the average US household visits a post office at least 2.5 times a month.  There are 115 million households in the U.S.  That comes to over 3.5 billion visits a year.  That’s more than three times as many as “Postal Facts” indicates.

Even that number may underestimate the total annual visits to the post office.  Think about the people with p.o. boxes, who go to the post office almost every day.  According to this OIG report, there are 21 million post office boxes, of which 14.4 million are occupied.   If those boxholders checked their boxes five days a week, that would come to 3.6 billion visits a year that aren’t being counted, on top of the one billion or so actual POS transactions.

But we could be talking about even bigger numbers.  According to a new survey conducted by the American  Consumer institute, the average consumer visits the post office more than four times per month.  There are over 234 million people over 18 in the US.  That would come to over 11 billion visits a year.

Take another look at the Household Survey chart.  Rather than showing a decline from 2009 to 2010, the HDS chart shows just the opposite.  It says that the number of visits was fairly stable from 2009 to 2010.  In fact, the numbers for those visiting a post office more than a couple of times a year went up:  The percent of US households visiting 3 to 6 times rose from 30% to 33%, and for 7 or more times, from 18% to 19%.  As the survey report observes, “Even with the continued availability of mail-related products and services through alternative modes (such as Internet orders), in-person visits to postal facilities remain stable.”

So how could Boldt testify to a sharp decline in visits when the Household Diary report shows an increase in visits?

NAPUS asked Boldt just that question in one of its interrogatories.  Boldt explained the inconsistency by making two points.  First, the Household Survey questioned customers on the phone or Internet about the range of frequency of their visits, but “they were not asked to recall or provide evidence of the actual number of visits.”  In other words, the survey dealt with ranges, not specific numbers, and it’s possible people made erroneous claims (they weren’t asked to “provide evidence”).

Boldt’s second explanation was one based on what he was told by those who conducted the survey.  Perhaps people in each of the three categories might be visiting a post office less frequently but still within the range.  So, for example, those in the middle category (3 to 6 visits a month) perhaps visited 6 times a month in 2009 but only 3 times a month in 2010.  The number of people in this category could go up, but the actual visits would go down.

But Boldt’s explanation doesn’t begin to grapple with the fact that the Household Survey chart shows that there are several billion visits to the post office every year, many times more than the Postal Facts page states or that his chart captures.  For his explanation to wash, people responding to the survey would have had to seriously overestimate their visits to the post office — like, they said they visited five times last month, but they really only visited once, a fact that would have been revealed if they had been required to “provide evidence.”

So what’s really going on here?

In their briefs on the Advisory Opinion, both NAPUS and the League of Postmasters have made this point very clearly.  The NAPUS “Initial Brief” criticizes the Postal Service for the way it chose post offices to close under the RAOI, since the notion of “low workload” failed to consider work that doesn’t bring in revenue, and the Postal Service made no effort to count visits to retrieve mail at post office boxes, which is the way many people in rural areas get their mail.  In its “Initial Brief” (p.34), the National League of Postmasters makes a similar point and identifies the Postal Service’s failure to consider the actual number of customer visits to the post office as one of the main flaws in the RAOI.

The Postal Service will probably dismiss the issue of visits to the post offices as unimportant.  The main argument of the Postal Service is that postal revenues are declining, so it only makes sense to “optimize” the retail network by closing post offices that bring in less revenue than it costs to operate them.  It is much less expensive to generate revenue using all the alternatives to the post office, like kiosks, stamps online, and stamps-on-consignment at your local chain store.