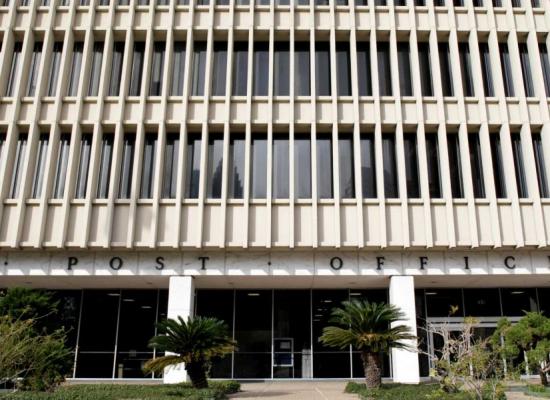 Next week the Postal Service will close the post office and processing center on Franklin Street in downtown Houston.  It’s a historic building, eligible for the National Register of Historic Places, but it looks as though it is headed for demolition.

In a "memorandum of agreement" about the disposal, the Postal Service states that it "anticipates demolition of the Houston PO/P&DC in association with transfer of the property."

The Postal Service first offered the property for sale in 2009, and there was talk then about turning it into a public park, an outdoor amphitheater for festivals and performances, or a mixed-use development with housing, a hotel, and entertainment venues.

The Postal Service didn’t accept any of the bids that were offered at the time, and the property has been on and off the market since.  At one point it seemed that the city might buy the building and convert into a criminal justice complex.  Developers argued that there were better potential uses for the property without the building.

The downtown post office is currently listed on the USPS-CBRE Properties for Sale website.  The sales flyer doesn't have much to say about the building.  The flyer focuses on the 16.4 acres of “highly visible” development property with “exceptional views” and a location "in the heart" of Houston’s Central Business District.

The CBRE website doesn’t list an asking price.  Back in 2009 a real estate expert said that before the market meltdown the site could have sold for more than $35 million.  Property values have recovered, but media reports don't mention any estimates for the property's current value.

Built in 1962, the Franklin Street post office was designed in the Brutalist style by Wilson, Morris, Crain & Anderson, the architects who did the Houston Astrodome, which is currently experiencing its own issues, sitting in limbo, awaiting demolition.

The Franklin Street post office is an iconic building in Houston.  Stephen Fox, an architectural historian and fellow of the Anchorage Foundation of Texas, has called the post office a “distinguished work of 1960s modern architecture by an important Houston architecture firm.”

At this point, the building is more than 50 years old and eligible for the National Register of Historic Places.  In order to dispose of it, the Postal Service was therefore required to go through a Section 106 process under the National Historic Preservation Act.

The Agreement states clearly that “USPS anticipates demolition of the Houston PO/P&DC in association with transfer of the property, thus negating efforts to provide preservation protections or restrictions.”

While the building be demolished, the Agreement still requires the Postal Service to complete a National Register Multiple Property Documentation (MPD) Form identifying other Modernist buildings in the area.

The Agreement also promises that several historic elements of the building — some stainless steel legged customer tables, a metal eagle hanging in the Caller Service transom, a stylized stone/cast stone eagle sculpture located in the front plaza — will be relocated to other post offices in the area.

In addition to going through a Section 106 process to dispose of the property, the Postal Service was required to go through two other procedures in order to consolidate the processing operation and close down retail services.

In July 2010, a public meeting was held as part of the process for consolidating the mail processing operations with another facility on the north side of Houston.  The consolidation process has been underway for some time, and it will be completed on May 15.

It’s not clear when the Postal Service also went through the required process for discontinuing or relocating retail services.  Some sort of town hall meeting was held in March 2015, but if that meeting was intended to fulfill the Postal Service’s legal obligation to discuss the closure with the public, it was strictly for show.  The decision to shut down the facility had been made long before.

In any case, according to the Houston Chronicle this week, the retail operation, including PO boxes, is being relocated to the Midtown carrier annex on Hadley Street.

And that will be that for the downtown post office.

In 1984, the Franklin Street facility was renamed the Barbara Jordan Post Office after the first African American congresswoman to come from the Deep South.  Last year Congresswoman Sheila Jackson Lee expressed concern about the "dignity" of dumping a building named for the Houston icon.

It will be injury to indignity on the day the wrecking ball strikes.

UPDATE: May 12, 2015: The Chron.com reports that the Postal Service "appears to be close to finding a buyer" for the property.  Spokeswoman Dionne Montague said the most recent bid solicitation period has closed and the postal service is “in the process of negotiations,” which may be finalized by the end of the year.  Montague said she was not permitted to provide any additional details “as it may compromise the negotiations.”