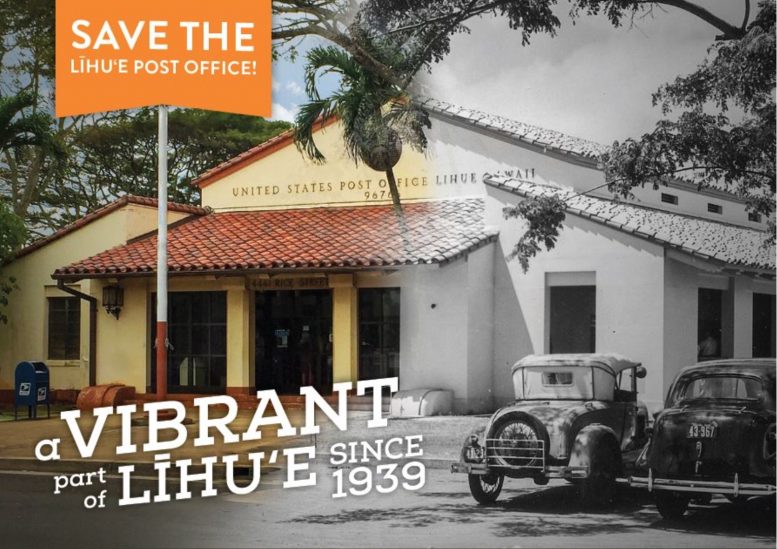 Historic Hawaii Foundation: The post office in Lihue, Hawaii, is on the Hawai‘i State Register and the National Register of Historic Places.  The Postal Service is now planning to “relocate” the post office and sell the building.

This is the first stand-alone post office on Kaua‘i built in 1939.  The original proposed design, a Depression-era mission-style fortress, was met by a storm of protest by Kaua‘i citizens led by postal engineer Floyd Williams, who successfully championed a redesign. The revised design was the architecturally popular Spanish mission revival style prevalent in the 1930s. The post office is one of 3 Mediterranean-style buildings in the town core constructed during that decade.

It took 10 years from the time territorial senator Charles Rice introduced a resolution to the U.S. Congress to provide funds for a new post office until Līhu‘e Post Office’s dedication in 1939.  According to members of the business and local community it is an integral part of life in Līhu‘e and complements efforts to enhance and grow a walkable downtown area.

Closure of Līhu‘e Post Office was announced via a Public Notice posted on January 23 in the lobby of the building located at 4441 Rice Street.  The notice solicited public comments on a proposal to end postal operations at that facility. A follow-up message later clarified that the proposal being considered is to consolidate USPS retail operations currently located at 4441 Rice Street with our USPS Carrier Annex facility at 3230 Kapule Highway.

A “Save Our Post Office” effort has begun.  Read more.