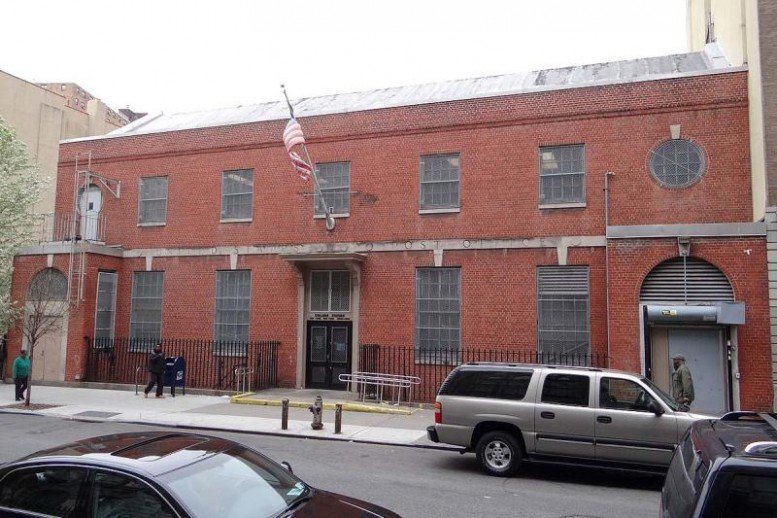 The Postal Service has announced plans to close and sell another historic post office.  The College Station post office on 140th Street in in Harlem was built under the New Deal, and it’s been serving the neighborhood since 1937.  It looks like 2014 may be its last year of operation.

As usual, the Postal Service says it plans to open a replacement facility somewhere in the neighborhood, so the closure is classified as a “relocation” and hence not subject to the stringent public notification and participation requirements of a regular discontinuance.

The Postal Service’s real estate specialist Joseph Mulvey, who has overseen numerous such relocations in the Northeast, is once again running the show in New York.  He has arranged to speak about the College Station relocation at a meeting of the Manhattan Community Board later this week.  That’s the only opportunity the public is likely to have for a face-to-face meeting with postal officials.

The meeting will be held on Thursday, December 12, at 6:30 p.m.  The Postal Service’s public notice is not dated, so it’s not clear when elected officials and College Station customers were told about the meeting.  But it was only today that the APWU got an email about the planned relocation — just three days before the meeting.

[UPDATE: After being notified that the meeting might be the only opportunity for the public to meet with postal representatives, the Community Board crossed the USPS off its agenda.]

Very few people attend community board meetings, and it will be difficult getting the word out to the community on such short notice.  As the Community Alert from the union says, “The Postal Service is piggy backing this important issue as part of an obscure meeting that no one attends.”

Plus, the meeting isn’t being held in the ZIP code area served by the College Station (10030).  Instead, it’s being held fifteen blocks away, at 215 West 125th Street, which will make it difficult for seniors and others to even get there.

The union is encouraging community residents and business owners to attend the meeting and to protest the downsizing of the post office to a new, smaller location.  That location is yet-to-be-determined, so the meeting and the public comment period won’t be able to address any issues the new location might present.

But the Postal Service likes to get the legal requirements of the procedure out of the way, and then go looking for a new location and, if it owns the building, a buyer.  That’s not really what the federal regulations are supposed to accomplish.  They’re intended to give the community an opportunity to have input on the new location and the future of the historic building.  But the Postal Service has been giving lip service to the regulations and pretty much doing whatever it wants, despite a lot of criticism.

Complaints about how the Postal Service has been conducting relocations have prompted the USPS Office of Inspector General to initiate an audit investigation.  One of its aims is “to look specifically at whether the Postal Service is providing affected customers enough information about relocation plans to enable those customers to fully understand and react to their potential impact.”

The OIG’s report isn’t due out until January, but anyone interested in the question need only look at the dozens of articles about relocations on Save the Post Office.  They are filled with details about how citizens were given inadequate notice, how public comments were given little consideration, and how the Postal Service has angered countless customers.

Appeals on relocations go to the USPS Vice President of Facilities, and any appeal directed to the Postal Regulatory Commission is dismissed as outside the Commission’s jurisdiction.   But the PRC knows about the problems.  When the Commission dismissed the Berkeley appeal, PRC Chairman Ruth Goldway wrote the following in her opinion:

“Decisions to relocate a post office can be wrenching on a community. The Postal Service should undertake a thorough and balanced review, particularly when the building is historic and part of the civic fabric of the community. A decision to sell a building prior to identifying a relocation site bifurcates the community input and significantly reduces the ability of the Service and the community to evaluate the impact of relocation.

“The process the Postal Service is currently employing appears to cause needless confusion in the affected communities, as evidenced by the appeals filed with the Commission, and damages its relations with the customers it is trying so hard to retain. The process would be improved if the Postal Service identifies the new post office location contemporaneously with announcing its decision to relocate the existing post office.”

The Postal Service has once again ignored the PRC’s recommendation and proceeded to start a relocation process with no new location having been identified.  If you can’t attend Thursday’s meeting, you can submit written comments until until December 27; the details are here.  You can also submit comments to the OIG here.

The College Station post office is described in Short and Stanley-Brown’s book on federal buildings of the 1930s: “This delightfully designed postal station is on West 140th Street between 7th and 8th Avenues and serves a district bounded by the Harlem River on the east, St. Nicholas Avenue on the west, and a depth of 20 blocks north and south. It is beyond the pneumatic-tube area. It derives its name from a former station near the College of the City of New York. The lobby is 21 by 47 feet and has a terrazzo floor, a marble wainscot, and wood trim. The structure is fireproof except for the woodplank roof which is supported on steel girders. The exterior walls are brick with a granite base and limestone trim.”  (from the Living New Deal)