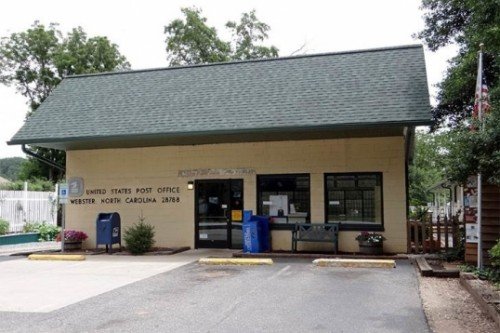 I am not an intervener in this docket. I understand that these comments cannot become a part of the record and may not have an impact on your deliberations in this case. I hope, however, that you will read them and give them some thought even if they do not add to the weight of your decision.

I am retiring today after more than thirty years of government service, over twenty-eight of them with the United States Postal Service. I retire having served the town of Webster, North Carolina, as postmaster for the last fourteen years.

Webster, a Level 13 office, serves post office boxes only and as late as two years ago brought in more than $120,000 in revenue. It serves a much wider community than the 476 post office boxes housed within it. People come to Webster because, I am told, the service is both friendly and thorough. They come from a distance even though there are at least three other offices within fifteen miles including a Level 20 in Sylva, North Carolina.

Over the years, in addition to delivering mail, selling postage, and offering advice on mailing, I have filled out money orders for the elderly and others who needed that assistance. I have watched children grow up. I have gone to countless dance and piano recitals, several weddings, and more funerals than I care to mention. I have put together four bicycles so they would be ready on Christmas morning. I have opened stuck jars, called doctors and utilities for explanations for customers. I have been an ear, a friend and a counselor and in all these roles and many others I have proudly represented the United States Postal Service.

I would like to think that all those surveys that claim that the United States Postal Service is the most trusted government entity are because of people like me who serve their communities in many of the same ways. People who make sure that someone gets that package of medicine or an Express mail even though the sign says the office is closed or the address is incorrect, people who serve not as bureaucrats but as unscripted human faces.

Webster is an office that will be downgraded by POStPlan. It is slated to go to six hours but if my calculations are correct, based on the slippery and ever moving targets offered by the Postal Service, it is likely to fall to four hours after the next evaluation. And three years from now when the current lease expires the office is very likely to close.

I am the landlord of the Webster building. I receive $270 per month in rent for the facility from a lease that is very one-sided towards the Postal Service. In the last five years of the lease I have spent over $20,000 on the building, replacing the HVAC system and adding a roof. I bought the building along with the house I live in that sits on the same property six years ago. Before that I landscaped the building, out of my own pocket, so the community would have an attractive and welcoming place.

The rent is about a third of local market value but given the tactics the Postal Service has been using in lease renewals I think it’s fair to suggest that a reason will be found to make the next set of negotiations impossible. The office is likely to be downgraded into irrelevance and closed due to “emergency” lease issues and regardless of how the Postal Service may claim otherwise, there is sufficient evidence to view such an outcome as more than likely.

Webster, like many of the offices affected by POStPlan, doesn’t have a business district. The post office is the heart of the town, its identity, its meeting place, and in some respects its soul. Postmasters in towns like Webster all over the country have regularly taken their jobs a step further by helping people in ways that are not purely postal and by making the extra effort to make their offices welcoming and attractive.

POStPlan is touted as a way to realign hours to the needs of communities but it doesn’t do that, primarily it simply reduces hours and removes important elements from the equation, elements that make some of these small rural post offices much more valuable than mere revenue figures would imply.

My grandfather, an old country fellow but wise in his own way, had a saying that applies to the management style of the Postal Service. He would say, “Son, never start vast projects with half-vast ideas.”

POStPlan and the realignment of nearly 18,000 post offices is a vast undertaking. The Postal Service has tried its best to convince you that they have carefully thought through their plans and that they have accounted for all the myriad factors that will affect service. Their charts and tables, their spreadsheets and presentations, all vouch for the thoroughness and professionalism of their effort. The problem is that for all the evidence presented to you for all the reasoning that claims this program is needed and beneficial, the fact remains that POStPlan itself is nothing more than a lie, concocted to allow those in Congress the false assurance that post offices won’t be closed but only made more efficient.

POStPlan isn’t well conceived, the fact is that at this moment the Postal Service has no idea how it is going to staff several thousand post offices. In the last couple of weeks my managers have approached me and virtually begged me to accept a PMR position upon retirement. Given my outspoken ways I think that says something. I learned only last Friday, a week before my retirement was scheduled to take effect, who would take my office, a PSE with about a year’s experience. She may do all right but the real plan is to hire a PMR with no experience.

Next Wednesday eighteen postmasters in a POOM area of 84 offices are scheduled to retire and my office is a prime example of the manner in which this transition is being accomplished. Check out and clearance procedures established by regulation are being completely abandoned for expedience.

You have sat through these hearings, actually a rather short docket given the impact of the changes being proposed, and while it is likely you will raise some questions about the efficacy of POStPlan, you will ultimately endorse it, possibly with some reservations, but endorse it nonetheless.

You will have followed the law and based on the submissions of evidence and the arguments offered in this case there is a narrow way in which you can clearly come to the conclusion that the Postal Service’s offerings are both reasonable and in compliance with the terms of the law.

I argued in recent comments about procedures in Nature of Services Cases that this commission is a “slave to the law”, and so you are. You must follow a law so poorly crafted by Congress that the idea of maximum effective service can be redefined to embrace the expedient and ridiculous. In each of these cases the proceedings are crafted so narrowly that you lose context, your application of the law and required procedure has your noses flat against but a single tree in the forest so your vision is nothing more than a strip of bark.

The cumulative effect of the changes the Postal Service has offered, stepping back to see the forest broadly, is nothing less than a complete redefinition of universal service so as to make that term meaningless. By any measure POStPlan is a fraud being perpetrated not only on rural America but on all America. It is another step in an effort to break the bonds people have with their post offices. This plan and the plans offered by the management of the Postal Service in general are designed to undue the process of binding the Nation together.

I could end by offering dire predictions of what will happen if you endorse this plan but I think that even those of you who have convinced yourself that Mr. Donahoe’s prescriptions are useful can imagine where we are headed.

I could draw parallels between what is happening to this treasured and essential institution with our general failure to embrace a positive and sustaining vision for the way we govern ourselves, for the way our commitments to each other as citizens are being broken and polarized but you are all capable of seeing where we are headed. I could tell you again how the postal network is essential and needed infrastructure and that our approach to the current problems abandons essential services but you would likely dismiss that as impractical.

No, follow the law, endorse this plan as you must but please do not pretend that it is anything other than expedience, cynical political cover for a Congress that no longer serves the public interest, and merely a stop on the road to eliminating universal service. Do not ask us to believe that it solves anything. It is, as Pappaw would say, “A half-vast plan.”