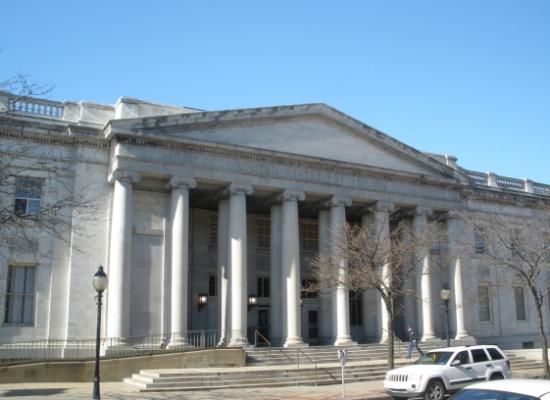 In July the Postal Service outsourced its real estate and property management business to CB Richard Ellis, the world’s largest commercial real estate company.   Today the USPS-CBRE website is up and running, showing off some 90 post office buildings as well as 36 land parcels, all for sale.   The Postal Service must be in a big hurry to dismantle itself — the website has a page on “About USPS” and all it says is “Under Construction.”  Maybe it should say, “Under Deconstruction.”

When the story was first reported back in July, the Wall Street Journal said that CBRE had been hired “to advise the agency on the 300 million square feet of property that it owns or leases.”  Tom Samra, vice president for facilities at the postal service, said, “We’ll be putting buildings on the market and terminating leases, where possible.” Over the next six months, Mr. Samra said, the agency and CBRE are looking to craft a plan on how to curtail the portfolio in line with the lower mail volumes seen by the agency.

That plan is now being implemented, and it turns out that CBRE will be doing a little bit more than “advising” the Postal Service.  The company is now the “exclusive” real estate agent and provider for the U.S. Postal Service.  It is taking over the negotiation of leases, and it is working with broker Caldwell Banker to market and sell post office buildings and lands.

As reported in a USPS News Link (thanks to Postal News for catching this), Samra says that the USPS real estate holdings are a valuable yet underutilized asset, and they cost the Postal Service a lot of money to maintain.  The Postal Service calls them “surplus buildings,” but they are “underutilized” and “surplus” because the Postal Service made them that way.  It has moved carriers out of downtown post offices to annexes on the outskirts and in the suburbs, like in Camas, Washington, where a New Deal post office is now for sale, with postal services moved to the annex.  It has shifted from owning to leasing spaces, like in Palm Beach Florida, where it sold off the New Deal post office and moved the post office to a rented space in a strip mall.  It has opened up “alternative retail access points” in Wal-Marts and Staples so that business is siphoned off from the brick-and-mortar post office, and now it says that customers “prefer” it that way.

Among the 90 post offices for sale on the new website are ten historic buildings (seen in the slideshow), most of them on the National Register of Historic Places.  They are part of the nation’s architectural treasure, and they are now up for grabs, waiting to be sold to the highest bidder.  Over the coming years, we’re going to watch thousands of post offices sold, and many of them will be historic landmark buildings that are the pride of their communities.  The American people own 8,000 post office buildings, over 2,000 of them built during the New Deal and before.  How many of them must we watch get turned into restaurants and clothing stores and real estate offices before people say, Enough?

Post offices are a fundamental part of the public realm, along with libraries, public schools, state colleges, national parks, and the public transportation system.  This public infrastructure was built and paid for by the American people, and that’s who owns it and that’s who it serves.  Now the public realm is under assault  by the corporate elite, which wants to see everything transferred over to the private realm, where they can make a profit off it.

But it shouldn’t be up to a handful of executives in L’Enfant Plaza, the USPS Board of Governors, and a few members of Congress to decide what happens to the Postal Service.  The post offices don’t belong to them.  Those are our post offices.  They belong to the 99%.