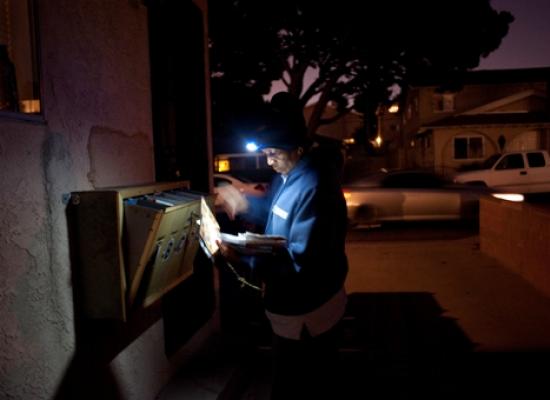 Yesterday the Postal Service published data showing what letter carriers have been complaining about for a long time: More and more of them are out on the street after dark.  Since 2005, the percentage of carriers out after 5:00 p.m. has gone from less than 20 percent to over 40 percent.

The numbers were produced as part of the request filed by the Postal Service with the Postal Regulatory Commission concerning a proposed change in service standards on some Standard mail.  The Postal Service wants to “load level” the mail and deliver on Tuesday mail that would have normally been delivered on Monday.  That would help lighten the work of carriers on Monday, the busiest day of the week.  (There's more on the request here.)

In order to justify the proposed change, the Postal Service included in its testimony the following chart.  Its purpose is to show that the percentage of carriers out after 5:00 on Mondays is much greater than the rest of the week.  The red line shows Monday; the blue line shows the average for all seven days of the week.

The PRC’s Public Representative asked the Postal Service to provide the data on which this chart was based, and that’s the data set published on Friday.  We’ve put the spreadsheet on Google Docs here.  (It’s USPS-LR-10 in Docket N2014-1, and it's on the PRC website here.)

The chart and the data do show that Monday is a long day for carriers, and many more of them are out after 5:00 on Monday than any other day of the week.

But the chart and data show something else as well.  The percentage of carriers still on their routes after 5:00 has increased significantly over the past three years.

And those are the averages for the week.  On Mondays in September 2013, 59.4 percent of letter carriers returned after 5:00.  The Monday numbers have been over 50 percent since November 2012.

The data set doesn’t show at what times carriers were returning, just that it was after 5:00, so one can’t determine how many were actually out after dark.  But the numbers provide convincing evidence that even though mail volumes are declining, the number of carriers on the street after dark is increasing.

There are probably several explanations for that, but the most obvious one is that the number of letter carriers has decreased significantly.  According to this CRS report, there were 228,278 full-time city carriers in 2005; the number was down to 192,180 in 2010.  The Active Employee Statistic Summary (HAT report) filed a few days ago shows that as of December 2013, there were 160,567 full-time city carriers.  That represents a decrease of 30 percent since 2005.

Mail volumes may be down, but the routes aren’t getting any shorter.  In fact, some of them may be getting longer since the total number of delivery points just keeps getting bigger (from 144 million in 2005 in to 151 million in 2011).   It’s no wonder that with a significantly smaller workforce, more carriers would be taking more time to deliver the mail.

Letter carriers will be able to point to many other reasons why they’re out late — the way flats get presorted by FSS machines slows them down, the consolidation of mail processing plants causes the mail to arrive later so they're getting started on their routes later, and so on.

Whatever the causes, the problem is getting serious.  The murder of a Maryland letter carrier out after dark in November shows just how serious.  The workforce reductions are also leading to more overtime costs, as discussed in this OIG report.

Postal workers have organized a Rally and March for Safe Delivery on Martin Luther King Day, Monday, January 20, in Washington, DC.  The details are here.  The rally starts after dark.