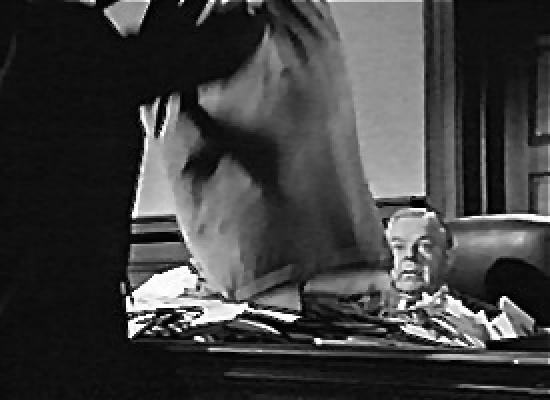 Every holiday season TV stations run the fabulous 1947 classic film, "Miracle on 34th Street," starring 9-year-old Natalie Wood.  In the movie, there is a nice old man (Edmund Gwenn) who plays Santa at Gimbels Department Store in New York City.  He says his real name is Kris Kringle, but he is threatened to be institutionalized because he really believes he is Santa.  Only his friend (Maureen O’Hara), who works in the store, and her lawyer friend (John Payne) can save him only by magically proving that he really might be Santa Claus.

At the climax of the film, all the letters to Santa, written by children all over the world, are sent to the court house, where the trial of “Kris Kringle” is taking place.  Not to ruin the ending for you, but the lawyer wins the case because the Post Office, "an official agency of the United States government," delivers the letters directly to the courthouse, thus proving Kris Kringle is the actual Santa.

So I am thinking about this Christmas and a possible meltdown of the postal system.  Where are all the letters to Santa going to go?  Are we going to tell children all over the United States that they now have to EMAIL Santa? You have got to be kidding.

Listening to the endless threats about firing postal workers and closing small and historic post offices around the country, I am hoping that people come to their senses, get creative, and do their jobs, before the childhood tradition of writing letters to Santa becomes extinct.

While I was thinking about “Miracle on 34th Street,” I also could not help but think about another holiday staple, the mailing of Christmas and Chanukah cards.  I have been personally making my own cards for many years, using crafty items such as embellishments, stickers, and rubber stamping techniques.  I sit for days making these cards, and no two are alike.  I get giddy with the thought that people actually look forward to getting a holiday card from me.  Often as I am creating them I think, “That one is perfect for my sister” or “Andy would love that one.”

I put a lot of time and effort into those cards, and it’s very personal.  Each card is like a gift in itself because it comes from my heart.  After all of them are complete, I decorate the outside of each one, checking the addresses of the recipient and placing the holiday postage stamps on them so they are not crooked.  Each one is signed by me and bears a sticker for my card-business name that I never had the time to pursue full-time – Cards with Heart.  In crafty circles, these kinds of creations are called "mail art," and there are many more people like me out there that do the same thing.

I do this all year long, for birthdays, anniversaries, and so on.  People so appreciate a handmade card.  I cannot imagine the world without real letters, real cards, and letters to Santa.

I want to know who is going to make the announcement that letters to Santa are over.  What will they say?  That there is no Santa?  That he moved from the North Pole and has no forwarding address?  Maybe Rudolph and the other Reindeer took a wrong turn?

Someone is going to have a lot of explaining to do.  Not only will we have millions of upset children, but parents all over America are going to have to concoct stories about why letters cannot be mailed to Santa.

If anyone knows the real Kris Kringle, please ask him if he has any ideas to help out the postal system because it’s right about now that we truly need a Miracle — not just on 34TH Street but on every street in America.

(You can leave a comment for Sherri, or send a note of thanks to postal workers, on the ""Send the Love" comment page, here.)