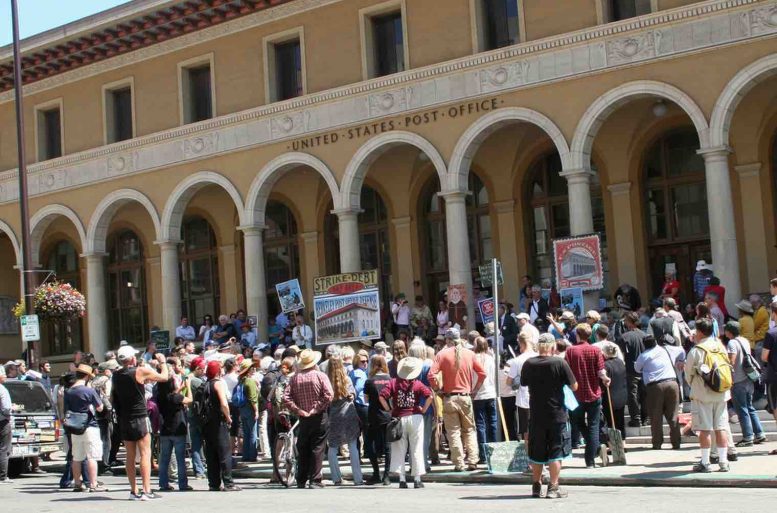 The Postal Service has rescinded its decision to relocate and sell the historic post office on Allston Way in Berkeley, California.  As a result, the legal case challenging the sale has been declared moot by the court, and the case has been dismissed.

The lawsuit was filed by the City of Berkeley and the National Trust for Historic Preservation late last fall.  The complaints argued that the Postal Service had failed to comply with federal historic preservation and environmental protection laws (NHPA and NEPA) prior to entering into a contract for sale of the building.

Yesterday, U.S. District Court judge William Alsup dismissed the lawsuits on the ground that they were moot after the Postal Service agreed to his requirement that it make a binding commitment to rescind its decision to relocate retail services and to confirm that the building is no longer for sale.  As noted in the Alsup’s ruling yesterday, “no pending sale exists and the property is not currently even listed for sale.  The USPS stated that it has not decided when, if ever, to re-list the Berkeley Main Post Office for sale.”

Should the Postal Service change its mind at some point in the future, the court’s ruling says that the Postal Service “must provide plaintiffs with written notice at least 42 calendar days in advance of the closing of any future sale of the Berkeley Main Post Office or any final determination to relocate retail post office services.”  That would give the City and the Trust an opportunity to renew the court case and reassert their arguments concerning NEPA and NHPA.

There’s an article about yesterday’s ruling on Berkleyside, and the court’s order is here.  There’s more about the recent developments leading up to the ruling on Occupy Oakland, here.

The City of Berkeley was represented by Antonio Rossmann (pro bono), and the National Trust was represented by Brian Turner.  Their work has really paid off.  In December, the prospective buyer of the post office canceled the sale, perhaps because of the lawsuit, and now plans to sell the building have been completely dropped.

Based on the court’s ruling yesterday, if the Postal Service were to renew its plan to sell the building, it would need to start at the beginning of the relocation process.  That doesn’t seem likely to happen anytime soon, so yesterday’s decision by the court is definitely a victory for the citizens of Berkeley, who have been fighting the sale since 2012.

The only downside of Judge Alsup’s decision to dismiss the case is that the court never ruled on the merits of the NHPA and NEPA issues themselves.  Thus, the complaints about how the Postal Service goes about selling historic post offices were not litigated, and no precedents were established that might affect the sale of other historic post offices.  And that may be why the Postal Service decided to cancel its plans to sell the Berkeley post office.