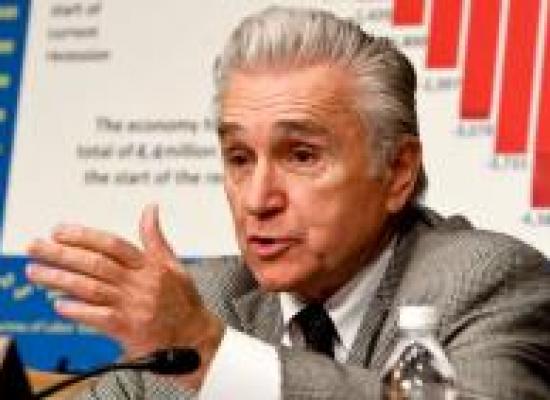 New York Congressman Maurice Hinchey has written a letter to Postmaster General Patrick Donahoe asking him “to place a moratorium on the USPS's current discontinuance studies until the USPS resolves the numerous problems the PRC identified in the RAIO. “  Hinchey is circulating the letter in Congress, looking for others to sign on with him.

The letter calls attention to the “serious flaws” identified by the Postal Regulatory Commission (PRC) in its Advisory Opinion on the Retail Access Optimization Initiative (RAOI).  The letter cites (1) inadequate financial data on all the post offices in the plan, “which makes it impossible to accurately calculate cost savings from proposed closures”; (2) inaccurate representations of revenue (various kinds of non-stamp-sale revenue were not included in the Postal Service’s calculations); (3) using geographical rather than driving distance as a criterion for putting post offices on the closing list; and (4) using criteria that disproportionately target rural post offices, a violation of 39 U.S.C. 101(b).

The Postal Service has not yet issued a formal reply to the Advisory Opinion, and it has apparently conveyed its intention to proceed with the closings to Ruth Goldway, Chairman of the PRC.  At a meeting of the PRC on January 5th, the Chairman made some introductory remarks about the status of the closings, intended to make sure everyone understood that the moratorium did not mean the discontinuance studies had stopped.  As the Postal Service said when it announced the moratorium, the studies are ongoing — only the final closing of the doors is postponed until May 15.

Goldway also said that the Postal Service would be holding a second community meeting for most of the post offices still under study (about 3,300 of the original list of 3,652).  A second round of meetings is not required, so they are apparently intended to help rectify some of the problems the PRC had identified.  Goldway also said that we could expect to hear announcements of “mass closures” when the moratorium ends.

Hinchey’s letter asks the Postmaster General to put a moratorium not just on the closings but on the studies themselves.  That would prevent the "mass closures" Goldway referred to.  It would also give Congress more time to address postal reform.

Just yesterday, Fredric V. Rolando, President of the National Association of Letter Carriers (NALC), announced that due to pressure from the unions, the Senate would delay a vote on S. 1789, which had been expected soon.  That's the bill introduced by Joe Lieberman (I-CT), along with Susan Collins (R-ME), Tom Carper (D-DE) and Scott Brown (R-MA).  It has some decent features, but a lot of problems.

There's a passage on “service standards” that would restrict post office closings by ensuring that certain criteria are considered, like geography and demographics, but that would not prevent thousands of post offices from closing.  The bill  would return $11.4 billion in overpayments to the Federal Employees Retirement System (FERS), but not the $50 billion to $75 billion in overpayments to the Civil Service Retirement System (CSRS).  It would re-amortize payments to pre-fund healthcare benefits for future retirees over a 40-year period instead of 10, but still cause excessive payments.  It would also permit a shift to five-day delivery in two years, reduce workman’s comp for employees of retirement age, change contract negotiations to favor management, and move toward an exit of the federal health benefit program (FEHBP).

The bill is still a lot better than the one likely to come out of the Republican-controlled House, which will probably be some version of H.R. 2309, the Postal Reform Act introduced by California Darrell Issa.  That bill is intended to dismantle the Postal Service and it's nothing but bad news for postal workers, post offices, and the country's postal system.

If the DeFazio-Sanders bill were to reach President Obama’s desk, all would be well with the Postal Service.  But that’s not going to happen.  If the House and Senate can agree on legislation — and that’s a big “if” — it will more likely be some compromise between the Issa and Lieberman bills.  It’s hard to imagine how that kind of postal "reform" will make supporters of the post office and postal workers happy.

UPDATE, Feb. 13, 2012: Hinchey has gotten 110 fellow House members to join him in the call for a moratorium on closure studies.

Here’s a list of all the bills in Congress:

We understand that the United States Postal Service (USPS) is facing acute financial difficulties, and as a result, has made the decision to begin the process of closing thousands of postal facilities. We share your concern about the solvency of the USPS and its future as our nation's postal service

Recently however, the Postal Regulatory Commission (PRC) reviewed the Postal Service’s Retail Access Optimization Initiative (RAOI), which is being used as the basis for the possible closure of more than 3,600 post offices and other retail facilities, and found serious flaws with the analysis that call into question the USPS's current consolidations plans. We share the concerns of the PRC, and ask for you to place a moratorium on the USPS's current discontinuance studies until the USPS resolves the numerous problems the PRC identified in the RAIO. These include :

We strongly urge you to rectify these issues within the RAOI before proceeding with any discontinuance studies or closures. The closure of Post Offices, stations, and branches will undoubtedly affect communities and lead to the loss of middle class jobs. We remain dedicated to protecting our nation's postal service and ensuring that all communities are adequately served by the USPS.