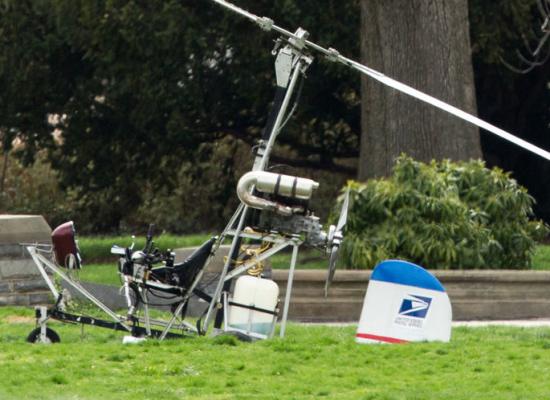 From the Tampa Bay News, "Ruskin gyrocopter pilot says postal officials are telling him not to talk to media," April 20, 2015

The Ruskin mail carrier who last week flew a gyrocopter into restricted airspace over Washington D.C., to make a political statement says he has been put on paid leave with the U.S. Postal Service with orders not to discuss his story with the media.

"I was informed by the acting postmaster—and he sounded like he was reading from a script—that I was on administrative leave pending an investigation," Hughes wrote in an email to the Tampa Bay Times.

"I am NOT allowed on postal property without advance permission and I can only enter the building through the front if I do visit with permission. (This injunction always precedes a termination.) I asked about the nature of the administrative leave—it's with pay BUT I'm not allowed to talk to the media AT ALL."

It is another restriction that Hughes said he intends to violate. He said the move amounted to a "gag order" that he did not respect.

A spokeswoman for the U.S. Postal Service said she could not discuss Hughes' employment status.

Hughes spent a night in jail after Capitol Police arrested him.  The ultralight aircraft and its cargo—a U.S. Postal Service bin carrying the letters—were seized.

Hughes' Russian-born wife, Alena, told the AP that her husband acted out of patriotism for the United States.

Asked Sunday if he too thinks he's a patriot or simply crazy, Hughes said. "Everyone gets to make up their own mind about me, that's what I'd say."

"But do you consider yourself a patriot?" a reporter asked.

“The unending chase for money I believe threatens to steal our democracy itself. They know it.  They know we know it.  And yet, Nothing Happens!" —John Kerry, 2-13

In a July 2012 Gallup poll, 87% tagged corruption in the federal government as extremely important or very important, placing this issue just barely behind job creation.  According to Gallup, public faith in Congress is at a 41-year record low, 7%. (June 2014)

Kerry is correct. The popular perception outside the DC beltway is that the federal government is corrupt and the US Congress is the major problem.  As a voter, I’m a member of the only political body with authority over Congress.  I’m demanding reform and declaring a voter’s rebellion in a manner consistent with Jefferson’s description of rights in the Declaration of Independence.

Hewitt: Look, today gives a whole new definition of the term going postal, and I want to start there.  61-year-old Florida mailman, Doug Hughes, landed a gyrocopter on your Capitol, your office front lawn this morning.  Do you think he should have been shot out of the sky before he got that close to the Capitol?

Graham: Yes. He should have been subject to being shot out of the sky. I don’t know why he wasn’t, but our nation is under siege.

Radical Islam is a threat to our homeland.  There are probably radical Islamic cells in our backyard already.  And if somebody is willing to, you know, approach vital government infrastructure, they should do so at their own peril.

I have got an idea for Congress and the Capitol Police.  Instead of charging this guy on the helicopter, gyrocopter, why don`t you give him community service?  And his community service can be one hour.  And his one hour should be spent addressing a joint session, a joint meeting of the Congress.  He should walk in there and tell them why he did that. And that must all be there to watch it`s.  That can be his community service and we can all watch.  If they put this guy in jail, what a bunch of clowns that would be to do that.

From Civil Disobedience, Henry David Thoreau (who went to jail for refusing to pay his taxes to protest slavery and the war with Mexico), 1849

Must the citizen ever for a moment, or in the least degree, resign his conscience to the legislator?  Why has every man a conscience, then?  I think that we should be men first, and subjects afterward.  It is not desirable to cultivate a respect for the law, so much as for the right.  The only obligation which I have a right to assume is to do at any time what I think right…

Unjust laws exist; shall we be content to obey them, or shall we endeavor to amend them, and obey them until we have succeeded, or shall we transgress them at once?

Men generally, under such a government as this, think that they ought to wait until they have persuaded the majority to alter them. They think that, if they should resist, the remedy would be worse than the evil.

But it is the fault of the government itself that the remedy is worse than the evil. It makes it worse. Why is it not more apt to anticipate and provide for reform? Why does it not cherish its wise minority? Why does it cry and resist before it is hurt? Why does it not encourage its citizens to be on the alert to point out its faults, and do better than it would have them?  Why does it always crucify Christ, and excommunicate Copernicus and Luther, and pronounce Washington and Franklin rebels?

From Court Statement, Doris "Granny D" Haddock (who walked across the country at age 90 to advocate for campaign finance reform), May 24, 2000

Your Honor, the old woman who stands before you was arrested for reading the Declaration of Independence in America's Capitol Building.  I did not raise my voice to do so and I blocked no hall….

In my 90 years, this is the first time I have been arrested.  I risk my good name—for I do indeed care what my neighbors think about me.  But, Your Honor, some of us do not have much power, except to put our bodies in the way of an injustice—to picket, to walk, or to just stand in the way.  It will not change the world overnight, but it is all we can do.

So I am here today while others block the halls with their corruption.  Twenty-five million dollars are changing hands this very evening at a fund raiser down the street.  It is the corrupt sale of public policy, and everyone knows it.

I would refer those officials and those lobbyists, Your Honor, to Mr. Bob Dylan's advice when he wrote: "Come senators, congressmen, Please heed the call.  Don't stand in the doorway, don't block up the hall."

UPS and FedEx are heavy hitters in Washington, D.C.  The Center for Responsive Politics reports that FedEx has been the largest single corporate political donor over the last fifteen years.  It has handed out a total of $21,409,229 in political contributions since 1989, and in the 2004 election cycle it shelled out $1,819,669.

“For years,” says Charles Lewis, founder of the Center for Public Integrity, “Federal Express has had a reputation for being one of the most aggressive special interests in Washington.”

The Center for Public Integrity reports that FedEx has spent $20,740,000 on lobbying the federal government from 1998-2004, and is second only to UPS when it comes to postal issue lobbying.

“This inauguration is bought and paid for by corporate America,” said Joan Claybrook, president of Public Citizen. “These businesses consider such gifts to be investments, with payback expected.”

The Wall Street Journal has called FedEx “a major lobbying force in Washington.”

“I was stunned by the breadth and depth of their clout up here,” said campaign finance reformer Senator Russell Feingold (D-Wisconsin).

(d) No employee shall engage in criminal, dishonest, notoriously disgraceful or immoral conduct, or other conduct prejudicial to the Postal Service.  Conviction of a violation of any criminal statute may be grounds for disciplinary action by the Postal Service in addition to any other penalty imposed by or pursuant to statute.

(a) An employee may not engage in political activity—

(1) while the employee is on duty;

(2) in any room or building occupied in the discharge of official duties by an individual employed or holding office in the Government of the United States or any agency or instrumentality thereof;

(3) while wearing a uniform or official insignia identifying the office or position of the employee; or

(4) using any vehicle owned or leased by the Government of the United States or any agency or instrumentality thereof.

From Postal Service Standards of Conduct, 665.16

Employees are expected to conduct themselves during and outside of working hours in a manner that reflects favorably upon the Postal Service. Although it is not the policy of the Postal Service to interfere with the private lives of employees, it does require that postal employees be honest, reliable, trustworthy, courteous, and of good character and reputation. The Federal Standards of Ethical Conduct referenced in 662.1 also contain regulations governing the off–duty behavior of postal employees. Employees must not engage in criminal, dishonest, notoriously disgraceful, immoral, or other conduct prejudicial to the Postal Service.

Conviction for a violation of any criminal statute may be grounds for disciplinary action against an employee, including removal of the employee, in addition to any other penalty imposed pursuant to statute. Employees are expected to maintain harmonious working relationships and not to do anything that would contribute to an unpleasant working environment.

It may well be that the determination of the government (in which, gentlemen, it will not waver) to punish certain malefactors of great wealth, has been responsible for something of the trouble; at least to the extent of having caused these men to combine to bring about as much financial stress as possible, in order to discredit the policy of the government and thereby secure a reversal of that policy, so that they may enjoy unmolested the fruits of their own evil-doing. . . .

I regard this contest as one to determine who shall rule this free country—the people through their governmental agents, or a few ruthless and domineering men whose wealth makes them peculiarly formidable because they hide behind the breastworks of corporate organization.”

For nearly four years you have had an Administration which instead of twirling its thumbs has rolled up its sleeves.  We will keep our sleeves rolled up.

We had to struggle with the old enemies of peace—business and financial monopoly, speculation, reckless banking, class antagonism, sectionalism, war profiteering.

Never before in all our history have these forces been so united against one candidate as they stand today. They are unanimous in their hate for me—and I welcome their hatred.

From Paul Blumenthal, "The Chamber Of Commerce Is Fighting Fiercely To Stop The Scourge Of Corporate Transparency," Huffington Post, April 22, 2015

But don't consider that a sign that corporate America is learning to live with transparency. Over the past two years, three of the usual suspects—the U.S. Chamber of Commerce, the Business Roundtable and the National Association of Manufacturers—have joined together to try to discredit the purpose of disclosure policies and the advocates calling for them.

Aided by the editorial page of The Wall Street Journal, the three big business groups have sought to undercut activist investors and pro-disclosure groups through public campaigns and private meetings with corporate executives.