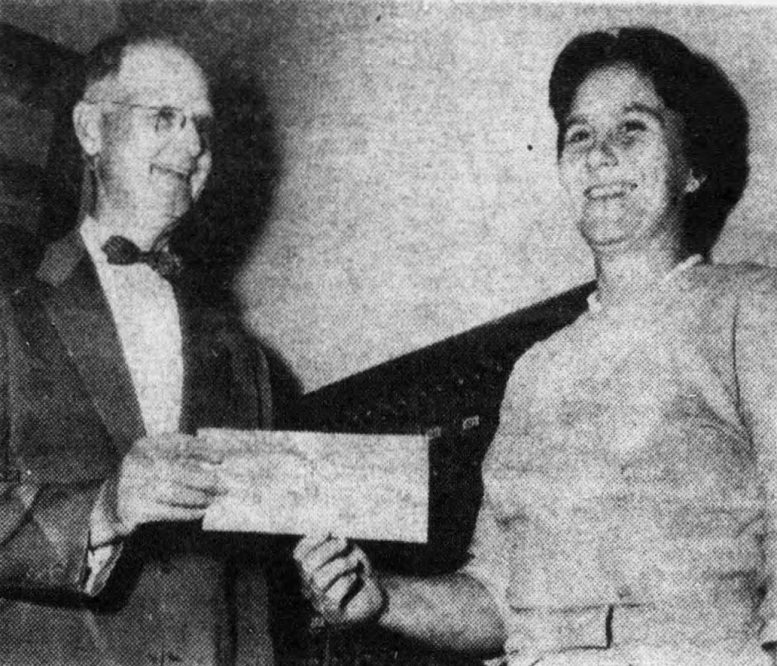 Fairhope Courier, November 15, 1961: “Pulitzer Prize Winning Author Visits Spanish Fort Post Office: Harper Lee, author of the Pulitzer Prize winning novel, To Kill A Mocking Bird, chats with Har­mon Hanson (photo above) while admiring his newly opened post office at Span­ish Fort. Miss Lee is a frequent visitor to this area and was de­lighted with the addition of this facility. Residents too, are singing the praises of this office — Christmas mails will be handled with greater speed. Many have rented post office boxes, finding it is con­venient to receive mails from early morning until night.”

A few weeks ago — nearly sixty years after Harper Lee’s visit — the Postal Service announced it was closing the post office in Spanish Fort, Alabama, effective January 15, 2021. Today the City of Spanish Fort filed an appeal with the Postal Regulatory Commission to stop the closure. The appeal, along with extensive documentation about the case, including bid solicitations and emails, can be found here.

The gist of the appeal is that the Postal Service has not gone through the normal discontinuance procedure required by 39 C.F.R. 241.3, which includes a feasibility study, questionnaires to postal customers, a public meeting, an opportunity to submit comments, access to the administrative record, and the right to appeal to the PRC.

As it has in the past with similar appeals, the Postal Service will soon file a motion to dismiss the appeal, arguing that that the Spanish Fort post office is a contractor-operated unit, not a USPS-operated facility, so the post office is not actually a “Post Office” and the closing is not covered by the regulations that govern discontinuances.

The Commission has dismissed several similar appeals on contract offices over the past decade, and most likely it will follow its own precedents and do so again. The Commission’s position is a slight variation of the Postal Service’s rationale. The Commission says that the discontinuance rules may apply to a contract unit but only if it is the “sole source” of postal services in the community.

That’s clearly the case in Spanish Fort. It’s a city of over 9,000 people, it was incorporated in 1993, it has its own government — and it has only the one post office.

The Commission will probably find a way to dismiss the appeal anyway, perhaps by expanding the geographic range of “community” to include nearby communities that do have post offices, as well as noting that one can always do postal business online.

News of the pending closure was not a complete surprise to residents of Spanish Fort. Elected officials have been trying to keep the post office open since it almost closed in September 2019, when the woman who had run the facility for nearly four decades decided, at age 80, that it was time to retire. Postmaster Hazel Farmer worked for the Postal Service for 42 years, 39 of them at Spanish Fort, and to honor her service, the City proclaimed the day she retired as Hazel Farmer Day. 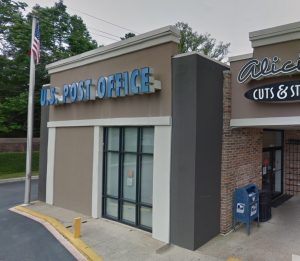 After Farmer left, the owner of the plaza where the post office is located was able to prevent the closure by agreeing to take over the postal business temporarily until a permanent contract could be arranged. Apparently the parties have not been able to come to an agreement, and last month customers were informed the Spanish Fort post office would be closing.

Some 700 box holders have been told that they will need to switch to street delivery or get a new box at the post office in neighboring Daphne. That’s a 10 or 15 minute drive from Spanish Fort, more during rush hour and tourist season, and the fastest route is U.S. Route 98, aka “Bloody 98” because it’s one of the most dangerous highways in the state. There’s still a chance that a new location will be found for a post office, but it would probably be little more than a kiosk within an existing business. The Postal Service says any new facility will not provide post office boxes.

when Harper Lee made her visit to the Spanish Fort post office, it was just two weeks old.  An article in the Baldwin Times, Oct. 26, 1961, reads, “Effective November 1, Spanish Fort will receive its designation as a post office, with the establishment of a contract rural station, a tributary of the Daphne post office.”

That designation for the Spanish Fort facility would later be changed to “Community Post Office” (CPO), a term the Postal Service usually uses for contract units that were previously independent post offices that had been discontinued and replaced by a contract office. That’s not the case with Spanish Fort (it was always a contract office), but the term can also be used for offices (like Spanish Fort) that bear the community’s name and ZIP code or that are stand-alone post offices, as opposed to being housed within a business or institution, which is usually the case with contract postal units (CPUs). And if all that’s not confusing enough, consider that on the Find USPS Locations website, the Spanish Fort facility is identified as a Post Office™, not a contract facility. Apparently even the Postal Service can’t keep the designations straight. 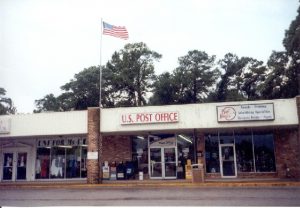 The first clerk in charge of the Spanish Fort post office was Harmon C. Hanson. According to Hanson (as he informed the Fairhope Courier when the office opened in 1961), this was the first post office established at Spanish Fort, except for a temporary facility there for both the Confederacy and Union Armies during the War Between the States.

Spanish Fort was the site of significant battles in both the Revolutionary and Civil Wars. In 1780, the Spanish constructed a fort there; in 1781, it was destroyed by the British; and in 1799 the Spanish rebuilt it, only to see it taken over by the United States in 1814. During the Civil War, Spanish Fort acted as a defense to Mobile and was the site of the Battle of Spanish Fort, one of the last major battles of the war. 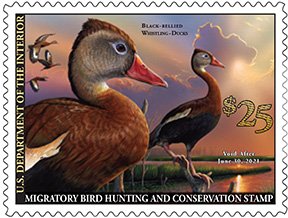 This year, the U.S. Department of the Interior issued its Migratory Bird Hunting and Conservation stamp for the 2020–2021 waterfowl hunting season, and Spanish Fort was selected as the location for the First Day of Sale ceremony  (The event had to be canceled due to Covid.)

The City of Spanish Fort has been working hard to keep its post office. The City Council put a petition opposing the closure on its website, and it passed a resolution with details about their frustrating efforts working with Postal Service representatives.

As reported in AL.com, Spanish Fort Mayor Mike McMillan said, “They have failed to adhere to the laws…  They are required to provide notice and questionnaires, which they did not do. No written proposal was prepared. Proposals for invitations for public comment were never made available to customers. No community meeting was held.” He added, “They are turning a deaf ear and not communicating to us.”

As noted in the appeal, Senator Richard Shelby and Congressman Bradley Byrne and their representatives communicated on numerous occasions with the Postal Service, and they were informed that a post office would remain in Spanish Fort, complete with the post office boxes. But the most recent solicitation for bids did not include the boxes, a point of considerable contention.

Shelby, Byrne, Mayor McMillan and the City Council all feel that the Postal Service has been very misleading about its intentions. In a letter to the Postmaster General (Nov. 14, 2020), Byrne notes that on multiple occasions USPS officials assured the community every effort would be made to keep the PO Boxes located in Spanish Fort. “We have now found out that USPS planned to move the boxes out of Spanish Fort all along,” Byrne told Gulf Coast News Today. “They have repeatedly breached the public trust and misled us.”

The appeal also argues that a pandemic is no time to close a post office. Bills have been introduced in Congress to stop the closing of all post offices during the pandemic. Moreover, notes the appeal “if the Spanish Fort Post Office is closed, it will increase demand on the Daphne Post Office at a time when social distancing requirements mandate limited customer access and additional precautions.”

One curious element of the story, as noted by Byrne in his letter to the Postmaster General, is that the Postal Service told Byrne’s staff that a collective bargaining agreement prohibits contract units from operating post office boxes. It’s not clear what the source of this explanation is. There doesn’t appear to be any such provision in the APWU bargaining agreement or anywhere else. Perhaps more details about this claim will be forthcoming during the appeal to the PRC — if the Commission chooses to hear the case at all.

Anyway, back to Harper Lee. In 2012, the Postal Service honored To Kill a Mockingbird with a stamp and envelope celebrating the 50th anniversary of the film adaptation of the novel. The envelope features a stamp of the film’s star Gregory Peck and images of the old courthouse in in Monroeville, where Harper Lee grew up. The courthouse is across the street from the post office, which was built in 1937 (under the New Deal) and which features a historic mural. It is still an operating post office. 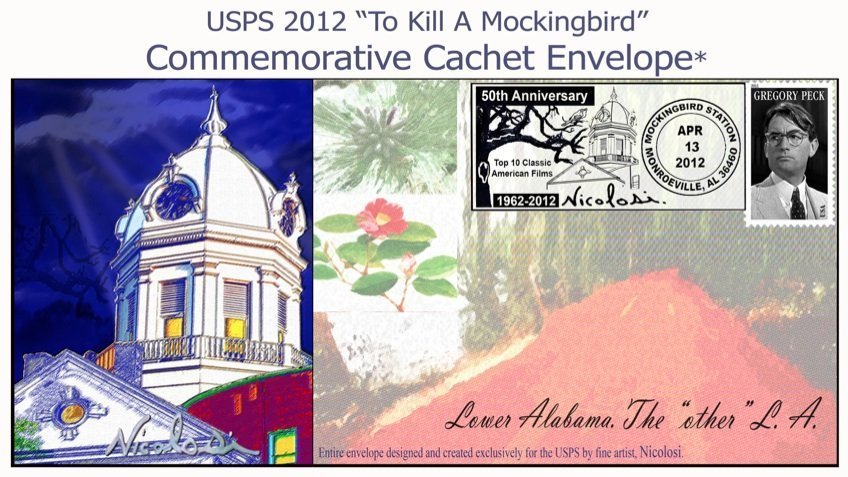 For more about the issues with closing CPOs and CPUs, see these previous posts and my comments to the PRC: