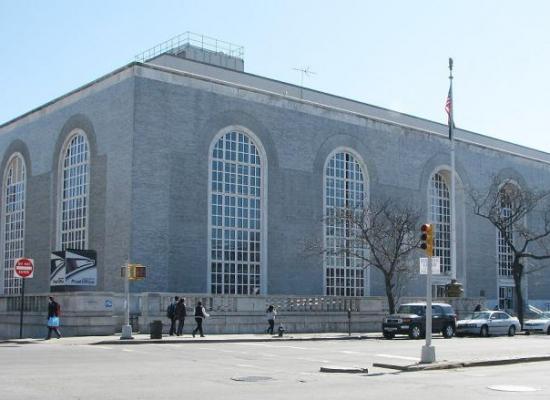 The New York Daily News is reporting that the Postal Service has sold the Bronx General Post Office to Youngwoo & Associates.  Back in February, The Real Deal had reported that Youngwoo was proposing to use the site to build a marketplace in the vein of the company’s unsuccessful plan for the Kingsbridge Armory in the Bronx.

The founder and principal of Youngwoo & Associates (YWA) is Young Woo, a Korean immigrant with connections to the Korean-American community.  According to the YWA website, Mr. Woo is an active philanthropist, a regular lecturer on real estate, and an alumnus and former trustee of the Pratt School of Architecture.

There's a good profile of Mr. Woo by Adam Piore in The Real Deal.  Piore notes that Mr. Woo has gotten into some controversies, including a $100 million lawsuit filed against him by Robert De Niro’s Tribeca Film Festival and a legal battle with a South Korean bank with which he had partnered on a deal to buy a Wall Street building.

Such controversies may be par for the course in the world of New York City real estate, but the choice of Youngwoo as the winning bidder for the Bronx GPO raises yet more questions about how CBRE, the Postal Service's exclusive real estate broker, is going about the sales of post offices.  One of the main allegations raised by investigative reporter Peter Byrne is that CBRE has been selling postal facilities to its own clients and to other businesses with which it has done deals, often at prices that were below market value.

According to Byrne’s Going Postal: U.S. Senator Dianne Feinstein's husband sells post offices to his friends, cheap, by selling postal facilities at low prices in this way, CBRE and its partners may be profiting at the expense of the Postal Service.

That’s a matter of particular concern because, at least until recently, the chairman of the board of CBRE was Richard Blum, Senator Feinstein’s husband.  Blum stepped down as chairman in May, but he continues to be a major stockholder.

While the Bronx GPO was estimated to be worth $14 million, the Daily News doesn’t say what the sales price turned out to be, and the Postal Service has not made any formal announcement about the deal.  Whatever the price, though, there’s no doubt that Youngwoo and CBRE have a prior relationship.

On the CBRE website, Youngwoo is listed as a client of CBRE Vice President Rima Soroka.  The two companies have also done several deals together.

In 2009, in one of the biggest deals of the year, Youngwoo & Associates partnered with Kumho, a  South Korean investment bank, to buy AIG’s NYC headquarters and the adjacent building, 70 Pine Street and 72 Wall Street.  According to Crain’s, the properties represented a total of 1.4 million square feet of commercial space, worth about $140 million.  CBRE brokers Darcy Stacom and William Shanahan represented AIG in the sale.  That deal ended up in court when Youngwoo accused a former employee of seeking to oust the company as development manager for the site.

In January 2012, the New York Post reported that Youngwoo, along with the San Francisco-based Bristol Group, selected CBRE (Stacom and Shanahan again) to market a 10-story, 240,000-square-foot property at 325 Hudson Street in New York City.

The Postal Service’s contract with CBRE has been the subject of several audit investigations by the USPS Office of Inspector General, concerning conflicts of interest, dual agency, and related issues.  The OIG is currently working on an audit about whether or not the sales have sometimes been below market value, as documented in Byrne’s book.  That audit may be out soon.  (There’s more on these OIG’s audits in this previous post and this one.)

A related issue is that CBRE CEO Robert Sulentic also serves on the board of directors of Staples, where a pilot program has been underway to see if the Postal Service could cut costs by outsourcing retail services to big box stores.

In a statement on his website, Congressman Jose Serrano, who has been fighting the sale of historic post offices, said the following: “The United States Postal Service has sold one of the Bronx’s most important community and historic treasures in a completely irresponsible manner — ignoring historic preservation law, without considering other options, and without properly consulting the community and listening to its concerns.  The USPS has disregarded the voices of the Bronx community, elected officials, historic preservationists, and their own employees — all of whom opposed this process and this sale.  Moreover, they have failed to formally announce the sale and provide details to the community.”

Over the coming days and weeks, we’ll be hearing more about the sale, Youngwoo’s plans for the building, and the Postal Service’s plans to relocate retail services.  But unless the OIG looks into the matter, we’re not likely to hear much more about the new owner’s relationship with CBRE and how it may have helped shape the deal.