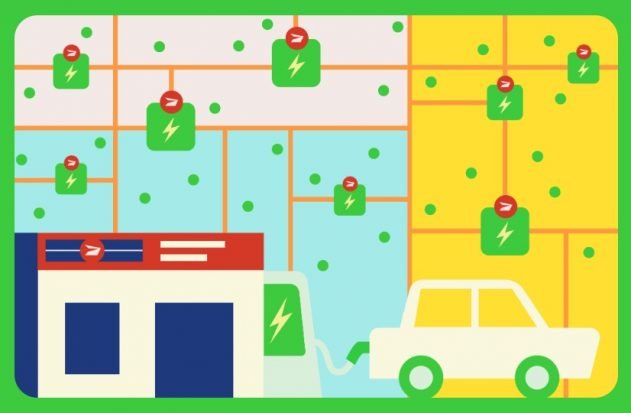 The Canadian Union of Postal Workers has put forward a plan — Delivering Community Power — to transform the postal system in ways that will “fight climate change and deliver vital new services to every corner of the country.” Under the plan, post offices would offer new services, like high-speed internet; provide low-fee financial services; and expand their role as community hubs. The plan also calls for putting public charging stations at every Canada Post office, where they can be used not only for the next generation of electric postal vehicles but also by the public.

The CUPW plan is in direct contrast to what Postmaster General DeJoy is going to do with the billions of dollars the Postal Service will be getting to electrify its fleet. His plans call for relocating letter carriers from post offices to large Sorting & Delivery Centers, and that’s where the charging stations will go, not at your local post office. The chargers will thus be well out of reach of postal customers.

Here’s what the Delivering Community Power plan has to say about putting charging stations at post offices:

There is no doubt that electric vehicles (EVs) are the way of the future. EVs reduce local pollution and significantly contribute to climate change mitigation efforts. But while electric vehicle prices have fallen dramatically over the past few years, one important barrier to widespread adoption of EVs is lack of consumer confidence in the availability of public charging stations.

With more post offices than there are Tim Horton’s in the country, we can help pave the way for more electrification by installing public charging stations at every Canada Post office.

Post offices are already centrally located, accessible and highly visible. By extending the nationwide EV charging network to every corner of the country, our post offices will become hubs of the new green economy.

Canada lags behind other countries in electric vehicle (EV) adoption, accounting for only 3% of new car sales. Norway leads with 74%, followed by Iceland at 45% and Sweden at 32% EV market share in new car sales. A green transition requires large-scale public investment in renewables. Why not put our largest public infrastructure at the centre of that transformation?

The same question should be asked about our postal infrastructure. In fact, just two days ago, the APWU came out in favor of public charging stations. In its statement applauding the White House announcement of new plans for a massive transition to electrification of the next generation USPS delivery fleet, the union says this: “The APWU and our community allies will continue advocating for charging stations at post offices which will be available for public use. There is no better network suited to be the foundation of a nationwide system/grid of EV charging stations than the public Postal Service anchored in every town and community.”

Several members of Congress have also been advocating for public-facing charging stations at US post offices. Rep. Brenda Lawrence (D-Mich.), who served as a postal worker for thirty years, has been promoting the idea, as reported in a 2021 Bloomberg article, “Post Offices Floated as Public Electric Vehicle Charging Sites.” Marcy Kaptur (D-Ohio), co-chair of the House Auto Caucus, said she too supports the idea: “We already own the property, the postal service has these vehicles and we could make them available to the public as well.”

In May 2022, the House Oversight Committee held a hearing entitled “It’s Electric: Developing The Postal Service Fleet Of The Future.” Rep. Lawrence questioned Victoria K. Stephen, USPS Executive Director, Next Generation Delivery Vehicle, about the idea of public-facing charging stations. Stephen was not very positive and pointed to some of the obstacles, including legal constraints on what services the Postal Service is allowed to provide beyond strictly “postal” services, as well as the need to maintain a secure fence line to enclose vehicles. Lawrence nonetheless made it clear that in her view funding to the Postal Service for electrifying the fleet should include public-facing chargers.

In October 2022, Rep. Carolyn B. Maloney, Chairwoman of the Committee on Oversight and Reform, sent a letter to the Postmaster General requesting information on his plans to use funding made available by the Inflation Reduction Act and the Bipartisan Infrastructure Law to help create a nationwide public EV charging network. Maloney asked the PMG to reply by October 25. His reply, if he wrote one, has not been made public.

If the Postal Service really wanted to install public-facing chargers, the obstacles could be overcome. Many (probably most) post offices don’t locate postal vehicles behind a fence, and those that do could put the chargers near the fence line so that they could service postal vehicles on one side and the public on the other. As for the prohibition against providing non-postal services, the Postal Service could ask Congress to make an exception for charging stations.

An OIG report from earlier this year, Electric Delivery Vehicles and the Post Office, discusses how other potential problems, like inadequate electrical power and limited space, as well as local zoning and land use codes, can also be managed. If there’s a will, there’s a way.

The Postal Service has given no indication that it’s the least bit interested in making its charging infrastructure available to the public. If the chargers are installed only at Sorting & Delivery Centers, it will be a missed opportunity.

While everyone is celebrating this week’s announcement that the Postal Service’s will buy more electric vehicles, we shouldn’t lose sight of how taxpayer funds are used to build the USPS EV infrastructure. If Canada’s postal workers see the value of putting public-facing chargers at post offices, why can’t it happen here?