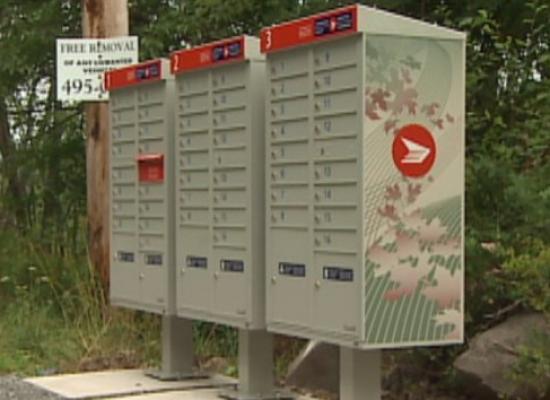 Canada is getting cluster boxes, and lots of them.  This week Canada Post rolled out it plan to replace home delivery at the door to centralized delivery at a cluster box down the block.  Nearly 100,000 residences, plus over 3,300 businesses, have been converted so far.  Over the next five years, Canada Post hopes to switch a total of 5 million addresses from door delivery to what Canadians euphemistically call "community mailboxes" (CMBs).  Here in the U.S., they're just called Cluster Box Units (CBUs).

Canada Post says it will save between $400 and $500 million a year by switching over to cluster boxes.  The savings will come from eliminating 6,000 to 8,000 jobs for the postal workers who walk the streets delivering mail to the door.

But Canada Post has a long way to go.  The first wave of conversions represents just 2 percent of the goal of 5 million addresses, and there will be little to no savings during the early stages of the program, due to the cost of installing thousands and thousands of cluster box units at an average of $800 each.  (Canada Post outsourced the contract for manufacturing the units to a company in Kansas.)

The plan was first announced last December.  As discussed in a STPO piece, "Canada gets cluster-boxed: Why it can’t happen here," it didn't seem likely then that the USPS would follow Canada Post's example anytime soon.  It still doesn't seem likely.

There are just too many obstacles in the way of mass conversions, not the least of which is customer opposition.  The Postal Service has a policy of not converting customers without their permission, so there are basically three ways to increase centralized delivery: (1) require cluster boxes in new housing developments (customer permission not required); (2) ask for voluntary cooperation from businesses and residents; and (3) determine that the safety of the letter carrier can be ensured only by replacing door or curb delivery with a cluster box.

The Postal Service is using all of these methods to increase the use of cluster boxes, and over the past few years there’s been a steady stream of news articles about threatening dogs and bad road conditions leading to non-voluntary conversions, and about the residents of a new housing development, like this one in Pennsylvania, learning that the Postal Service won’t deliver to their curbside mailboxes and will require the developer to put in cluster boxes.

Between 2008 and 2013, the number of addresses with cluster box delivery increased by 10 percent, but that was due largely to an overall increase in the number of delivery points.  In terms of total delivery points, the proportions have remained essentially the same over the past five years, as shown in this chart included in the GAO report:

The bottom line is that despite the savings that would come from converting millions of addresses to less expensive modes of delivery, “stakeholder resistance” and other obstacles have prevented the Postal Service from moving more aggressively in this direction.  It's one thing to tell residents of a new subdivision they have to put up with cluster boxes, but it's another thing to change the mode of delivery for millions of current customers.  It's just not a likely scenario for this country.

It's not even certain that Canada will get the mass conversions that Canada Post is envisioning.  Residents are already complaining about a variety of issues and concerns: litter and graffiti, snow removal, bad lighting, broken locks, motorists stopping at the box at all hours (in front of someone’s house), increased costs for businesses (which need to pay for an employee's time to fetch the mail), and so on.  As the conversions increase, so will the complaints, especially when winter comes.

The postal workers union is taking Canada Post to court to block the program, and organizations representing seniors and the disabled are joining the lawsuit.  Plus, Canada Post has begun implementation in neighborhoods where it's most feasible.  Things will get more complicated as the plan progresses into more dense urban areas where there's not much space on the sidewalk or street corner for a CMB unit.