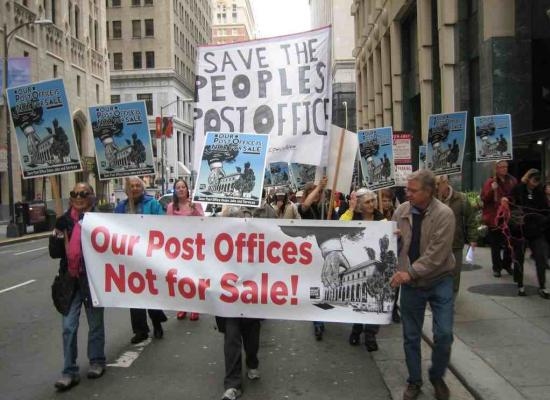 The US Attorneys' office has notified the City of Berkeley that the prospective buyer of the Berkeley main post office has exercised an option to cancel the sale, which was set to close on December 22.

News that the development firm of Hudson McDonald was the buyer of the post office was reported by Berkeleyside in early November, after weeks of silence from both sides in the deal.  Citing “good business practices," the Postal Service has been reluctant to keep elected officials and other interested parties informed about the deal.

The sale is being challenged in lawsuits filed by the City of Berkeley and the National Trust for Historic Preservation (as discussed in this previous post).

On November 5, U.S. District Judge William Alsup issued a temporary restraining order against the Postal Service, halting the sale until a hearing on December 11 (as reported by Berkeley Daily Planet).  The motion for the preliminary injunction was filed by attorney Antonio Rossmann on behalf of the City of Berkeley.

The fact that the sale has been canceled will probably not stop the lawsuit, however, since there’s still a dispute about whether or not the Postal Service has followed proper procedures regarding historical preservation laws and the disposal of federal property.  It’s also possible the Postal Service will find another buyer to replace Hudson McDonald.

There’s no word yet about why the sale was canceled or if the injunction and the lawsuit had anything to do with it.

UPDATE: According to a report in Berkeleyside on Dec. 4.: "Chris Hudson, principal at Hudson MacDonald, said his company had been unable to reach agreement with the Post Office by the time when the contract reached its expiry date. Hudson said they asked the Post Office for an extension, but the Post Office declined, saying they had 'things to figure out.' Asked if he was disappointed, Hudson said he was hopeful they might be able to get back at the negotiating table. 'Maybe it’s not over,' he said."

A report in Inside Bay Area News has additional information: "Local developer Hudson-McDonald is not buying the historic downtown post office.  The deadline to enter into a formal contract for its purchase was Thursday.  'We were unable to extend the contract,' Chris Hudson said in a brief phone interview, explaining that more information about the building was needed before his company could enter into a purchase agreement.  'We just ran out of time,' Hudson said."