It had to happen.  In the year 2020 the Postmaster General went on television and announced to the country that because of a $600 billion USPS deficit and Congress’ refusal to permit him to charge $5 for a first-class stamp, the American people would only receive their mail one day a year.  This would be known as “Mail Day” and would be considered a national holiday.  He regretted the decision but assured the American people that they would still receive the best service of any postal system in the world, and he assured everyone that with only a few exceptions no one would be inconvenienced by it.

At first people were angered by the news, but pretty soon they accepted it as they have everything else the U.S. Postal Service has done to them. 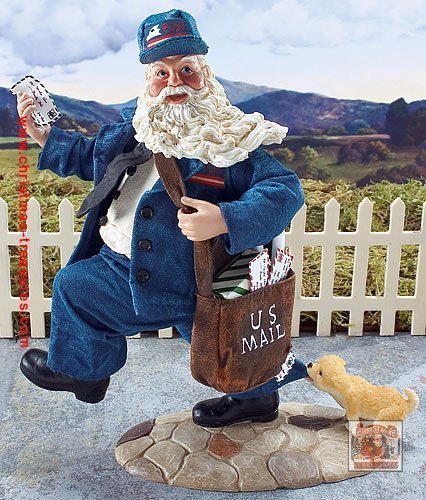 In a few years Mail Day became as popular as Christmas and the excitement built up as the day came near.

Little children were told that if they were bad the mailman (he was pictured as a man in a blue uniform with a long white beard) wouldn’t bring them video games.  Department stores hired men to play the role of the mailman and men and women and children would sit on his knee and tell them what they wanted for Mail Day.

People decorated their doors and windows with old birthday and get-well card and put colored lights on their mailboxes.

The hit record played for weeks before Mail Day was Bing Crosby’s rendition of “I’m Dreaming of a Sears Catalog.”  There was a great deal of goodwill associated with the holiday.  Doormen and elevator operators and building superintendents became kinder and more attentive.  Charity organizations raised funds on the street for poor people who had no one to share their mail with.

Fraternal groups got together and walked through the streets singing mail carols.  The churches and synagogues stayed open on Mail Day Eve so people could pray for letters from their children.

When youngsters asked where the mailman lived, their parents told them he lived at the North Pole and he spent the entire year canceling stamps on letters and packages so he could leave them on Mail Day morning for them.  When they asked how he delivered the mail they were told he put it in bags and came down the chimney when everyone was sleeping.  Everyone locked up their dogs on Mail Day Eve.

On the morning of Mail Day the entire family came downstairs and opened their bags of mail.  Mothers got all the bills, father got all the newspapers and magazines that had piled up for the year.  There were letters and postcards and birthday cards and Christmas cards for everyone.  Grandmothers and grandfathers opened their Social Security checks.  Children gleefully ripped open the junk mail with four-color catalogs and appeals from Indian reservations that didn’t exist.  There were also packages from stores and mail-order houses and tax returns and alumni fund appeals.

It took all day for people to open the mail.  In the evening relatives came by to exchange canceled stamps and have Mail Day dinner with each other.  Every TV network put on a televised football game and there was a Muppets Mail Day special on TV.

For 10 years Mail Day was the most exciting day of the year.  But then in January of 2030 the Postmaster General appeared on television and said that because of rising costs and a $2 trillion USPS deficit the Post Office would be unable to deliver the mail once a year as it had done in the past.

In the future, he said, mail would only be delivered one day, during leap year.  He felt in this way the Post Office could operate with more efficiency and still provide the services that so many people depend on.  But he warned that if congress did not raise the price of a first-class stamp to $49 a letter, the Post Office would have to take more drastic measures, which included only delivering the mail once every Bicentennial year.

The Buchwald piece is printed verbatim except for a few changes to bring it up to date — children will receive video games instead of “records of the month,” everyone will watch the Muppets special instead of the Andy Williams holiday special (remember that?), and Buchwald’s prediction was for 1980.  (The original article is here.)

The piece originally began with the quote, “‘Post Office Threatens to Cut Down Deliveries to Three Times a Week’ — headline in last week’s newspaper.”

Buchwald wasn’t making that part up — it was right out of the day’s news.  Plans to reduce the frequency of mail delivery go way back.

In April 1977, for example, the Commission on Postal Services recommended that delivery be cut to five days — a recommendation based on a Nielsen survey that found that “six-day delivery, though convenient, is not considered essential by a great majority of our citizens, when compared with the costs of providing that service.  To the Nielsen survey, 80% found that five-day delivery would be acceptable.”

Other studies, however, questioned the wisdom of reduced service.  A USPS study done in 1980, for example, showed that eliminating Saturday delivery would cause the mail to pile up, and “the augmented workload on Monday would cause some of the mail available for delivery on that day to spill over until later in the week.”  Other studies found that the hardest hit would be rural areas and postal employees, who would lose thousands of jobs.

For example, last year the Postal Service asked the Postal Regulatory Commission for an Advisory Opinion about eliminating Saturday delivery.  The Postal Service cited focus groups it had conducted which showed that nearly everyone would prefer eliminating Saturday delivery to a 10% increase in rates.  There have been other recent surveys showing pretty much the same thing, such as this Rasmussen survey, which said that 68% of those surveyed favor cuts in delivery to keep stamp prices down.

But the PRC’s  “Advisory Opinion on Elimination of Saturday Delivery”  (March 2011) found that eliminating Saturday delivery would cause the mail to pile up on Monday and slow down delivery of First Class and Priority mail.  It would also have a seriously adverse effect on particular populations, such as rural areas and small businesses.  The PRC also expressed concern about the delivery of medicines and perishable matter, and it challenged the $3.1 billion cost savings the Postal Service had estimated and came up with its own, smaller estimate of $1.7 billion.

The more things change, the more they stay the same.  Except this time around, the Postmaster General may get his way.

Have a Happy Thanksgiving.  And Good Mail Day.

(Image credits: Good Mail Day; mailman with beard.  The information about 1977 comes from The Postal Precipice: Can the U.S. Postal Service Be Saved, by Kathleen Conkey, Center for Responsive Law, 1983.)