The Postal Service is continuing to close downtown post offices and move retail services to inconveniently located postal facilities on the outskirts of town.  While it may be efficient for carrier annexes and mail processing plants to be located where there's plenty of room for parking for postal workers and easy access for delivery trucks, these facilities were never intended for use by average customers.  But in its quest to cut costs, the Postal Service doesn't seem to care much about average customers, and the "annexation of the post office" goes on.

The Postal Service is now planning to close the downtown post office in the Federal Building on Third Street in North Platte, Nebraska, and replace it with a retail office in the carrier annex and mail processing center on Industrial Avenue.  The name of the road tells you everything you need to know about the new location.

The annex is on a dead end road in an industrial tract far from the center of the city.  It’s totally unsuitable for pedestrians and bicyclers, and the only reason anyone would drive out there is to go to the post office.  There’s not much else.

As per its usual MO, the Postal Service did not hold a public hearing on the relocation plan.  Instead, as permitted by the relocation regulations, it sent a representative to a regular meeting of the City Council.  The meeting was sparsely attended.  Most people in North Platte probably learned about the proposed relocation of the post office by reading a news article or seeing a news report on TV a couple of days after the meeting was held.

At the meeting, City Administrator Jim Hawks complained that he had been misled by the Postal Service representative into thinking that this would not be the only opportunity for the community to meet face-to-face with a postal official. As a result, the meeting was not listed as a public hearing on the council agenda.

“I thought I asked, and was told that the council meeting would not be considered the public meeting,” Hawks said.

Russ Rainy, the USPS representative from Denver, said simply, “I apologize if I misspoke.”   There would not be another meeting.

As usual, the Postal Service thus fulfilled its legal obligation under the federal regulations governing relocations and avoided having to face a large room filled with angry customers.

The few that did attend the City Council meeting were definitely unhappy.  Another complaint was that the Postal Service is giving customers only two weeks to submit written comments, with a deadline of December 31.  That too complies with federal regulations, but the comment period will occur when people are distracted by the holidays — another way for the Postal Service to minimize opposition to the relocation.

These sorts of problems in the relocation process were the subject of an investigation by the USPS Office of Inspector General issued earlier this year.  The OIG noted that in many cases the Postal Service had failed to issue a press release before the public meeting and did not adequately solicit comments.  The OIG pointed to several other recurring issues involving public participation, not following regulations, and not providing transparency.  (There's more about the relocation problems in this previous post.)

The post office in North Platte is a big operation, with a thousand post office boxes and daily use by over 300 businesses.  Many of them are run by one person, so it’s important to be able to walk over to the post office during lunch.  Now these businesses will have to find someone to drive two miles to the annex.

One business owner at the meeting said that many customers would look for alternatives to the Postal Service.  For example, there’s a FedEx Ship Center less than a mile from the post office, and a UPS store just over a mile away.  For people who live and work downtown, these may prove more convenient than the annex, so the Postal Service will lose revenue.

The Postal Service owns the annex building, so aside from the cost of retrofitting it for a retail operation, some money will be saved on the rent at the downtown office.  The amount of the rent is not disclosed on the USPS leased facilities list because the Federal Building is operated by the GSA. 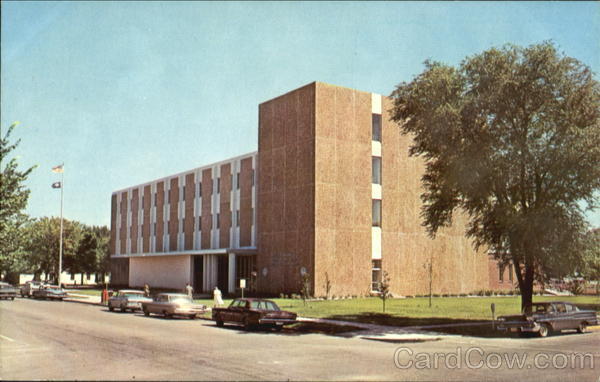 But saving some money on the rent should not be the Postal Service's only concern.  The North Platte Federal Building and Post Office was built in 1964, so it's now fifty years old and eligible for the National Register of Historic Places.  Perhaps more importantly, it's located in the heart of the North Platte Historic Downtown district.

The Postal Service is supposed to be locating into such areas, not moving out of them.  As noted in "Preserving Historic Post Offices: A Report to Congress," prepared by the Advisory Council on Historic Preservation, the Postal Service has a legal obligation to locate in historic downtowns.

Executive Order 13006, issued in 1996, "directs federal agencies not only to locate their operations in established downtowns, but also to give first consideration to locating in historic properties within historic districts."

The order requires the federal government to “utilize and maintain, wherever operationally appropriate and economically prudent, historic properties and districts, especially those located in central business areas.”  It also directs federal agencies to give “first consideration” to historic buildings when “operationally appropriate and economically prudent.” The Executive Order was codified into law as an amendment to the National Historic Preservation Act in 2000.

The Postal Service has presented the plan to move to the annex as a proposal in its early stages, but if past experience is any indication, it’s already a done deal.  A “final decision” will come early next year, and the move will take place when a retail counter is set up in the annex.

UPDATE: The North Platte City Council has decided to hold its own special meeting about the closing of the downtown post office, and it will consider filing a complaint with the Postal Service for failing to properly notify the public as required by federal regulations.  Read more.