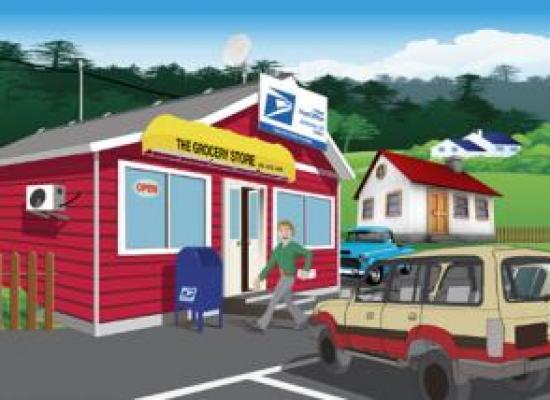 The Postal Service is in the process of closing some 3,650 post offices as part of its Retail Access Optimization Initiative (RAOI).  The first of them will close by the end of the year, and it will take a few more months to work through the list.  But the Postal Service is already looking ahead, and word now comes that 4,000 more post offices will soon be on the chopping block.

It came out a couple of weeks ago in an interview Deputy Postmaster General Ron Stroman did with MyPrintResource.com.   (Thanks to Dead Tree Edition for catching this.)  Stroman was discussing the RAOI, and then he said this:  “After we finish that review, we will probably pick up another 4,000 that we will review.”  (Stroman’s remark comes at 2:00 into the video.)

We've known for a while that the Postal Service wants to close 16,000 post offices over the next six or seven years, but this is the first we've heard of a new list coming after the RAOI. Stroman didn’t mention in the interview that the Postal Service is also working on yet another list of 727 post offices that had been initiated for closure before the RAOI list came out.  Plus, about 230 post offices have already closed over the past year.  So we’re looking at nearly 8,500 post office closings over the next couple of years — well on a pace to reach 16,000 closings by 2017.

The Postal Regulatory Commission (PRC) has asked the Postal Service about its future plans, presumably concerned that in focusing only on the RAOI list, now under consideration for an Advisory Opinion, the PRC is just seeing a piece of the overall plan.  James Boldt, the man running the RAOI, told the PRC in testimony on Sept. 8, 2011, that “future plans will be developed after the Postal Service has absorbed the lessons from the RAOI,” but he did not elaborate.

Pressed further by Commissioners, Boldt was assisted by USPS attorney Michael Tidwell, who jumped into the conversation to explain: “The Postal Service's view from the start has been very clear.  We have developed an initiative that involves 3,650 facilities that is being examined in this docket.  If, and when, the Postal Service determines that it wants to cast the net at another 3,650 facilities, it recognizes: (1) it has to move forward to the Board of Governors to seek authority to do so; and (2) if a conclusion is made that that initiative itself might involve a nationwide service change, the Postal Service recognizes it has obligations under Section 3661,” and it will ask for another Advisory Opinion from the PRC.  (Testimony Transcript, p. 356-7).

The bottom line: The Postal Service is only just beginning to close post offices.  There will be one list after another, and the post office closings will go on and on and on.  The Postal Service is "segmenting" its overall plan into smaller pieces in order to make the impacts seem less significant and to avoid provoking an even bigger public outcry than we're witnessing.

EVEN THOUGH THE POSTAL SERVICE is being upfront about its plans to close even more post offices, its approach is very misleading in many ways.  Just to cite one example: The Postal Service tells a community where a post office may close that there's another post office just a few miles away.  But what happens in a year or two when that post office also closes?  if both post offices had been presented on one big list from the get-go, it would have been a completely different story.

In any case, the distances to the nearest post office are going to get further and further, and people will be pushed more and more to seek alternatives, like the postal counter in a supermarket or Wal-Mart.  That's already been happening, and the Postal Service uses this as evidence to argue that people actually prefer these alternatives to a real post office.

That's exactly what Stroman says in the interview — customers prefer alternative retail outlets, and the Postal Service is just being responsive.  In this context, Stroman brings up the Village Post Office, and he makes a very revealing comment worth noting.

In its PR about the VPO, the Postal Service has indicated that these would typically be postal counters in “mom-and-pop” convenience stores.  To create this impression, the first VPO was opened in a family-run convenience store named Red’s, and the PR materials show just this kind of cute little general store.  The idea is to reassure small rural communities that the VPO will be just as down-home as the post office they're losing.

But in discussing the VPO, Stroman suggests something completely different.   (This comes 3:40 into the interview.)  He brings up the “Village Post Office concept,” and then says, “In that respect, we are pairing with other major businesses, for example, Office Depot.  We have a tremendous relationship with Office Depot. . .   We have pairings with other businesses, and we are in the process of negotiating with others.”

Stroman didn’t say with whom the Postal Service was negotiating, but it sure didn’t sound like he was referring to another mom-and-pop operation like Red’s.  So much for the vision of the VPO as a good ol’ fashioned postal desk in the general store.  The Postal Service obviously has big plans to connect with more major retailers, and the VPO-in-a-general-store is just a smoke-and-mirrors device to hide what’s really going on: replacing post offices with postal counters in big box stores and retail chains.

Anyway, you have to hand it to Mr. Stroman.  There he is talking about about closing thousands of post offices, consolidating hundreds of processing facilities, and putting a hundred thousand postal employees out of work, and he's as calm and businesslike as could be.  I guess it’s nothing personal — it’s just business.